Doom was shown. We know it was Doom because the title said Doom, there were demons on Mars, projectiles you could dodge, a chainsaw, and a ten minute sequence where the demo player backtracked to press up against every wall while grunting. 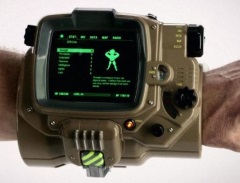 Later it was revealed that Fallout 4 will have a collector's edition (because of course it will) with a ridiculous life sized Pip-Boy that you strap on your ridiculous arm. There's no screen. Instead, it's built to house an iPhone running an app that displays the Pip-Boy user interface. This item is sure to get a lot of use, if you consider "looking at the plastic collector's edition garbage on your shelf and shaking your head in regret" as a use.

The Xbox One now has its own version of Early Access! Wow! Developers like DayZ's Dean Hall are very excited about the prospect of taking your money, then moving on to a second game before finishing the first.

In a surprise announcement, Microsoft revealed that the Xbox One would have complete backwards compatibility! Eventually. Sort of. Once the initial cheers died down, it was explained that some older games will be playable by inserting the disc to authorize a download of an emulated version of that game, since the system can't really run them natively. Also, this will only work with a limited selection of titles. Cool, but not quite as impressive as it initially seemed. Microsoft can still turn this around by allowing users to emulate the Xbox 360 interface instead of dealing with the navigational nightmare eye garbage that is the Xbox One dashboard.

We also saw the Elite Controller Ultra Something. This is sort of like a regular controller, only you can swap out all of the parts and rearrange them in all sorts of configurations. It costs $150. Doesn't seem worth it, unless you can swap in a proper Start and Select button as God intended.

EA (you might remember them as the company that occasionally made games) would like to remind everyone that Battlefront, featuring Star Wars, is a game in which Star Wars happens. I'm personally looking forward to this game a lot. Not as much, I suspect, as EA and its shareholders are.

In Rainbow Six: Siege, Angela Bassett IS a character named Six. In related news, the new Assassin's Creed features Charles Dance as Creed, The Division stars Emma Stone as Division, For Honor will have Lucy Liu portraying Honor, and James Spader has been signed to star as Lands in Ghost Recon Wildlands.

We saw footage from Batman: Arkham Knight, a game that couldn't be less appealing to me unless it had Call of Duty or Assassin's Creed somewhere in the title. In this thrilling sequence the player was a cop shooting up a diner full of civilians. Playstation 4 owners get this content exclusively. Some idiots cheered the notion of exclusive content for unknown reasons.

Sony later suggested that you might want to put on a Morpheus virtual reality helmet and sit on a couch with your friends, who would all be playing the same game without the helmet. Like it's no big deal. Just a thing people can do without feeling weird at all. 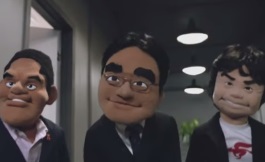 Animal Crossing hasn't appeared on a home console in eight years. Wii U owners have been begging for an installment. Nintendo slyly showed a bunch of new Animal Crossing Amiibo characters... to be used in... a Wii U game... which was clearly set in an Animal Crossing world... and turned out to be a board game.

The fine folks at Nintendo put so much effort into letting everyone down with the Animal Crossing announcement that they apparently forgot to bring the upcoming Wii U Zelda.

A new role=playing video game was announced, Final Fantasy VII. From what I understand this will be a prequel to Final Fantasy XIV.