Something Awful Endorses for the Third and Final Time 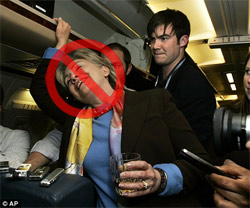 Way to go, Democrats. What the fuck is wrong with you people?

I'm sorry, that's not fair to all of you, but for the majority: what is your goddamn problem?

Back in December we endorsed Senator Christopher J. Dodd in the Democratic Primary. It was a first for us to officially endorse a candidate for President, we were excited. Sure, he was an underdog, but Iowa seemed to be coming down with a serious case of Doddtheria and we felt confident in a come-from-behind win. Instead, 99.8% of Iowans rejected Senator Dodd and he almost immediately dropped out of the race.

We were hit pretty hard around the Something Awful offices. Lowtax moped around the office, Dr. Thorpe rolled from side to side on the floor of his office, and Livestock gained almost a hundred pounds in a matter of weeks. I knew we had to pick a new candidate to support or we would be overcome by listlessness.

On February 4th of this year, just hours before Super Tuesday, we voted to fully endorse Senator Hillary Rodham Clinton. I won't replay her qualifications for you here, but suffice it to say she totally outmatched the competition.

So it is, with a heavy heart, that I must report our candidate will no longer be pursuing the Democratic nomination for President of the United States of America. On Friday, the 6th of June, Senator Clinton officially withdrew from the race, conceding the field to Senator Barack Obama. Her defeat came as a shock to all of us. 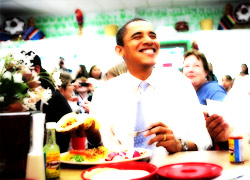 Sexist race-baiting corrupt monster, B. Hussein Obama.Fragmaster was in the process of screaming "DENVER!" over and over again when he heard the news. I had just finished gluing "HILLARY OR TEAR IT UP!" buttons to the hood of the Something Awful company car when I heard a girlish scream. I thought perhaps bobservo had gotten his hand stuck inside the microwave again and hurried to find the source of the caterwauling.

Corin Tucker's Stalker was standing in the room where we store all of our fire poles, sobbing softly and trying to tear his eyes away from Wolf Blitzer's flocked face.

He wailed. We hugged, tenderly, like soldiers looking at the boots and helmet of some hetero dude in our unit that got blown up by terrorists. I wiped the tears from his eyes with my monogrammed kerchief and together we confronted the reality that it was finally over. No convention fights. No riots in the streets of Denver. Forget about the Michelle Obama effigy I had been marinating in kerosene. Our girl was out of the race.

Lowtax gathered all of the writers. We had a good cry, talked about our feelings, and then we touched each other's junk for a while in a totally patriotic and non-sexual way. After that we all knew what had to be done.

We had to endorse another candidate. 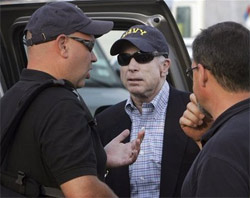 John McCain on the set of the Invisible Man. There were only three men (and zero women!) still in the running to become President of the United States. We were not counting Bob Barr, the Libertarian Party Candidate, whose moustache is known to drive birds to frenzy. Nor did we consider Ralph Nader as we simply cannot endorse pedophiles or child killers.

That left Congressman Ron Paul, Senator John McCain, and Senator Barack Obama. It was a difficult decision and one we did not undertake lightly.

Senator Obama, Hillary Clinton's chief rival, might have seemed the natural choice for us. He appeals to our demographic of self-hating white college kids with too much money. However, his conduct during his campaign against Hillary was disgusting. He sullied President Bill Clinton's reputation by repeatedly forcing him to make racist comments. We were also terrified by his religious mentor, Reverend Jeremiah Wright. He was clowny fun to listen to, but his gold Lamé robes reminded us of nightmares we had where Liza Minnelli was a warlock.

The last straw against Senator Obama finally broke when he made his intolerable comments about bitter people clinging to guns and religion in small town America. Bitter, Senator Obama? Disgusting!

I don't know how many small towns you have visited lately, Professor Big Time Chicago Senator, but the people there are far too stupid to be bitter. No, Senator B. Hussein Obama, you and your Quran are going to have to rely on the sexist media to get elected, because red-blooded outlets like Something Awful will never endorse your elitist attitude.

It came down to Congressman Ron Paul and Senator John McCain. After hours of arguing back and forth about Building 7 of the World Trade Center, fiat currencies, and melanomas, we came to our decision.

For the next President of the United States of America Something Awful is proud to endorse...