"I must say, Harold, this is quite a lovely party," grunted the barbarian as his massive tree trunk arms cleaved the double bladed axe through the air in a sweeping horizontal arc.

"Why thanks Andy," barked the smaller man as he tumbled backwards along the cliff's path and well out of the axe's range. He moved deftly in spite of the glowing set of silver armor adorning his torso and legs. His crimson cape billowed behind him in the wind like a Billower, a very rare breed of horse that was particularly useless. "I'm glad you could swing by. Is Kate here too or did you come stag?" 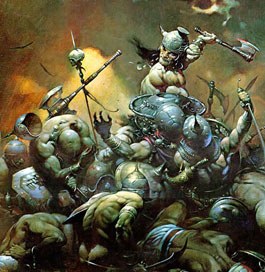 "Oh, she's around here somewhere." A safe distance now between himself and his enemy, the barbarian surveyed the battlefield in the valley below them, hoping to spot the sorceress somewhere in the chaotic swarm of ten thousand screaming warriors and beasts. His foe was much faster than he had anticipated, and if the barbarian's axe couldn't connect with its target then the considerable strength which had won so many of his battles would be nullified. The magic woman's tricks would be very helpful in this fight. Too bad she was nowhere to be found. "The grass looks great, what have you been doing to it? Some sort of new fertilizer?"

"Actually, we hired a gardener," replied the caped man as he entered a new stance, grasping the hilt of his exotic curved sword with both hands next to his right ear and pointing the blade's end directly at the ground. "Lupe is his name, we're really happy with his work."

He sprinted toward the barbarian, feigned left, then slashed his sword upwards in a blindingly fast uppercut. The barbarian was just barely able to block the attack, catching the sword's blade in the nook between his axe's blade and its handle. The two leaned into their weapons, straining face to face, staring each other down with seething hatred.

"Your own gardener?" the barbarian growled, spittle wetting the face of the smaller man. "Geez, how much are they paying you at the firm, you old dog?"

A small volley of arrows rained down upon them, one impaling the barbarian's foot and another glancing off the right side of the caped man's skull, tearing back a flap of flesh nearly the size of his palm in a spray of blood. The men clumsily disengaged from one another and turned to face their new attackers. Across the valley, on the mountaintop across from theirs there crouched a handful of goblins. Their tiny frames spasmed with laughter, and even from this distance one could spot the chunks of gristle and filth stuck between their rows of yellow needle-like teeth.

"Hey!" The caped man bellowed at them, clutching his wound. "You kids, what did I tell you about jumping in the pool like that? You messed up my hair and got Andy's nice shoes all wet."

True to their cowardly nature, the goblins scurried off at the sound of his aangry voice, one of them taking great care to stick his bony green middle finger high into the air as he went.

"Don't worry about it, Harold," mused the barbarian as he yanked the arrow out of his foot. "I knew it was a pool party so I didn't exactly wear my nicest shoes. Besides, anything that happens to your hair can only improve it."

"Oh, you card you!" Left alone once more with his now-wounded nemesis, the caped man saw an opportunity had presented itself. "Come on, let's go to the cabana and grab a drink."

Still clutching his head, the smaller man fled into a narrow passageway in the rocky face of the cliff. The barbarian had no choice but to follow, wounded leg and all. The path was cramped for a man of his considerable size, and just when he thought he was about to become stuck he stumbled out into a circular grassy plateau surrounded by a dense rainforest. It was such a beautiful and unexpected sight that he didn't see the trap spring into action.

"Tell me how you like the taste of this drink." The caped man chuckled from an unseen position as he threw the trap's lever, pinning the barbarian between two rectangular grids of sharpened bamboo spears. "I learned how to make it on the internet."

"Oh man," sighed the barbarian in agony, his body crushed awkwardly and punctured completely in a dozen places. "This is nasty. It's like someone that only drank piss their entire life tried to make Zima."

"Ha ha! Too strong for you, Andy? Maybe I should make you a Shirley Temple to chase it down with."

"Woah." The barbarian had been struggling to free himself, but now he paused as his eyes locked onto something to the north. "Who is that fox over there?"

From the nearest treeline, a massive T-Rex emerged. It regarded them with seeming disinterest as it sniffed the air, then it began to lumber their way.

"She's really something, huh?" cried the caped man as he darted behind his foe, using the bamboo trap as a shield between himself and the dinosaur. "That's Lupe's sister. Looks like she's coming this way."

The T-Rex stopped directly in front of the men, then bent forward and let loose a roar in its nonsensical dinosaur language.

"What did she say?" whispered the caped man, sure he was about to die.

"I think it was Spanish... let me try to say hi back." Still pinned in place and losing blood by the gallon, the barbarian directed a frightening roar of his own toward the great beast, whose snout was sniffing hungrily a mere inches away from his face. "Hola, mi ventana. Me llamo!"

The T-Rex reared its head back in confusion, its unblinking eyes rolling upwards as its comically undersized arms flailed wildly in an attempt to cover its earholes. Without having inflicted so much as a scratch on either man, the terrible king of lizards ran off into the rainforest from whence it came.

"Yeah, that worked really well," marvelled the caped man as he left his hiding spot and grinned at the barbarian. "Nice move genius. You sure know how to scare away women."

"Oh shit, that reminds me. What time is it?" The end was near for the barbarian. He had simply lost too much blood. "I've got to get going. Kate has a yoga class at three."

The caped man suddenly regretted springing this fatal trap. He had once been friends with the barbarian, long ago. Though they now found themselves on opposite sides of a conflict which had swept up all the kingdoms of man and beast alike, he knew that the dying man in front of him was good at heart. This was no way for a man to die.

"No, wait!" wailed the man in the cape. "You just got here, at least stay for some barbecue."

"Sorry, I've really got to go," replied the barbarian as he flashed a warm but very tired smile. "Let's meet up on the golf course this Sunday. Bye!" And with that, he was gone.

"The golf course, sure." The caped man turned his face to the heavens, a single tear carving a path through the ash and dried blood which had caked upon his cheek. "I'll see you there buddy."