Friends Coming Over Tonight, Ranked in Order of Rowdiness

Hi, Honey. Just a heads-up for you: Football season is about to start, meaning the house will soon be filled with all my rowdy friends on a weekly basis. To assist you with understanding their unique and delightful personalities, I've put together a list which ranks them in order of rowdiness. Please keep this in mind before approaching any of them with snack platters and/or beer koozies. In fact, I would avoid using the word "koozie" altogether. Really works some of them up. 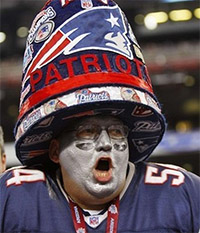 Most Rowdy Moment(s): Drank an entire party-size trough of broccoli cheese dip on a dare when the Packers lost Super Bowl XXXIII. Refused to have his stomach pumped by EMTs who arrived at the scene until after the post-game show. Dub's colostomy bag is a testament to his devotion to football.

Non-Rowdy Shortcomings: Supreme sensitivity towards costumed sports mascots. "Must be hot in there!" he is known to exclaim. Has lost 11 dogs by leaving them in parked cars, so we just chalk this up to idiosyncracy. 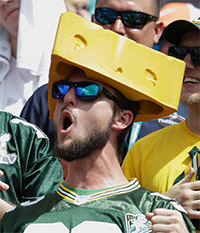 Prime Rowdiness Trait (PRT): Disrespect for the property of his host. Celebrating most touchdowns with his patented "butt stomp," Mark has shattered the frames of seven couches in total, and destroyed the following via collateral damage: two (2) glass-topped coffee tables, grandma's memorial urn, Leonardo the Box Turtle (missing, presumed dead), and a copy of the Nintendo game "Who Framed Roger Rabbit?"

Most Rowdy Moment(s): Patiently sat through an Aerosmith halftime show as we pulled the remnants of several shattered springs from his ass and inner ass regions.

Non-Rowdy Shortcomings: Openly weeps during the singing of the National Anthem. His dad might have died in Vietnam, but that's no excuse. It was a business trip to Vietnam in 1989. 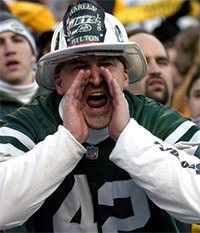 Prime Rowdiness Trait (PRT): Hits on other men's wives shamelessly and openly. We normally would not tolerate such behavior, but the entertainment value of women being humiliated definitely overpowers our fears of infidelity.

Most Rowdy Moment(s): Successfully faked a concussion so Dub's wife would give him "CPR." Even after the subsequent lawsuits, divorce, restraining orders, and Rudy's move to the YMCA, it's still a story that makes us laugh and laugh. Even if a court order forbids him to speak publicly about it.

Non-Rowdy Shortcomings: Often loses concentration during game nights by talking softly to and pawing at a faded picture of his estranged son. 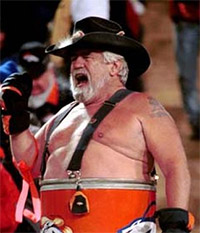 Most Rowdy Moment(s): When we questioned his insistence that every first down be marked with the firing of a starter pistol, he filibustered for 63 hours about the importance of the Second Amendment. Quickly changed his tune when I reminded him the Second Amendment also meant I could murder him if he didn't leave my house. Several warning shots later, and we're still friends.

Non-Rowdy Shortcomings: Fumbles with a troubled erection through his jeans during the singing of the national anthem. We're thinking of leaving the room to him and Mark during this pre-game ritual. 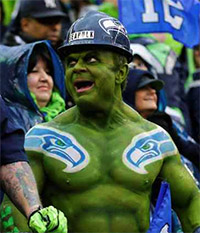 Stan "The Man" "Superfan" "With a Plan" Peppercorn

Prime Rowdiness Trait (PRT): Stan's three nicknames give him power and confidence we can only dream of. Also, he can belch most of the alphabet without throwing up.

Most Rowdy Moment(s): Gave the pizza boy a "pink belly" when he didn't know our team was in the playoffs. Not very hard to perform on an unconscious body, but still a worthwhile achievement.

Non-Rowdy Shortcomings: Often pulls out a Bible during quiet moments. Sometimes it's not hollowed out to hide a flask of whisky, and that's when we worry.