What could possibly be better than the unwanted sequel 300: Rise of an Empire? Could it possibly be unasked for cartoon adaptation Mr. Peabody & Sherman? Or perhaps the unpalatable Nymphomaniac? Or even the unheard of Repentance? Or maybe none of the above?

EXPECTATIONS: If you need further proof that Hollywood will find a way to give any film a sequel, I present to you Exhibit A: Zack Snyder's 300. All but one of that film's titular heroes wound up lying dead in a giant puddle of abs. Nevertheless, Warner Bros. funneled money straight down Snyder and Frank Miller's throats until they finally crapped out a sequel. The trailers have been surprisingly strong, so if the final product is even half as good, 300: Rise of an Empire could be the first great action film of the year. 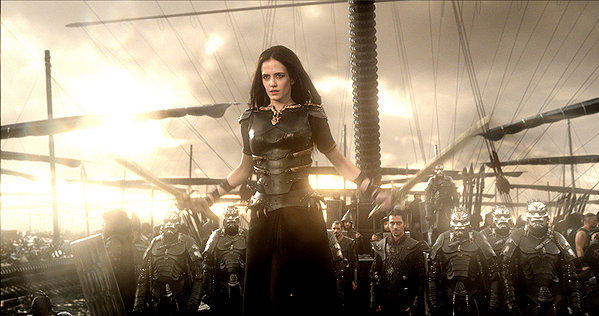 Just gonna be over here carrying this movie.


REALITY: Or it could just plain suck. We don't usually spend time in our reviews speculating on upcoming films, but 300: Rise of an Empire gives me reason for pause. After watching generals spout nonsense platitudes while their armies hack and slash at each other for ninety minutes, I have to wonder if writer/producer Zack Snyder has any clue what the word 'sequel' means. If the work he and director Noam Murro turn in here is any indication, Snyder's Man of Steel sequel promises to be especially dire.

Based on Frank Miller's sequel comic to 300 (which, as of this writing, technically doesn't exist yet), Rise of an Empire details the events leading up to the Battle of Thermopylae and the naval battle that takes place shortly thereafter. As the film opens, Spartan queen Gorgo (Lena Headey) tells her soldiers about the Battle of Marathon a decade prior. There, the Greek general Themistocles (Sullivan Stapleton) kills Persian king Durian. Consumed with rage, Durian's son Xerxes (Rodrigo Santoro) fashions himself into a god-king and sends his general and confidant Artemisia (Eva Green) on a conquest to crush the Greeks. 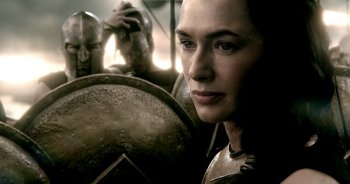 Just gonna be over here, deserving better.After all of that set up, the bulk of the film follows Themistocles in his campaign to unite the peoples of Greece and mount a defense against the coming Persian invasion. While there is much talk of Leonidas and his 300 electing to defend Sparta on their own, we hear of them only in passing and briefly witness the aftermath of that battle. For more information on the 300 Spartans, Rise of an Empire refers you back to the original film, presumably through a branching menu on the eventual DVD release.

Rise of an Empire wastes so much of its time reminding us of the events of 300 that it rarely takes the time to establish its own identity or develop any of its own themes. While 300 was filled with iconic characters and frighteningly quotable lines, this film features Eva Green hamming it up like she just opened a deli. It's an incredibly fun performance, don't get me wrong, but amongst a host of thousand-yard stares and tin-eared line readings, she becomes the only thing keeping all of this dead weight afloat.

The film's biggest problem is that it simply isn't about anything. The Battle of Thermopylae echoes down through the ages because it's one of history's most iconic underdog stories. Its hook is perfect for retellings and reinterpretations. That's why 300, for better or worse, became such an unexpected hit. Setting aside all of Zack Snyder's cinematic trappings, it's just a damn compelling story. To that effect, Rise of an Empire plays out like one of the six-page footnotes Tolkien would write into his hobbit books. It's not an essential part of the story, and only the true turbo-nerds are going to care about any of it.

It doesn't help that the film writes Themistocles as a tragically dull character compared to Artemisia or Xerxes. Hell, even Leonidas, who only appears as a severed head, has a more commanding presence than Themistocles. Sullivan Stapleton manages to convey none of his character's supposed wit or military prowess. When he's not slicing up fools on the battlefield, Themistocles practically becomes a background character in his own story. We only know he's a brilliant tactician and soldier because Artemisia constantly tells us he is, and we can only recognize him because he stomps around in a blue cape. 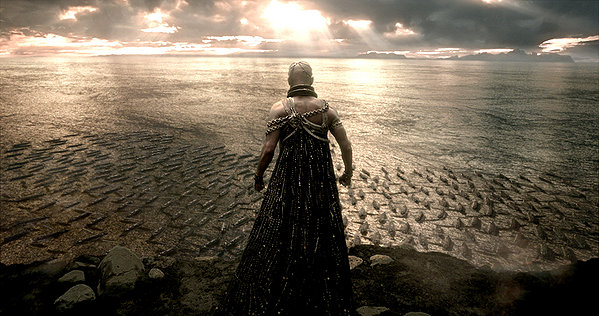 
Then again, this might be by design. The film toys with the notion that Themistocles is simply a citizen doing his duty, nothing more. He's more interested in honor and country than fame and fortune, which would explain why he seems like such an average guy. Artemisia fancies him as every bit the potential god-king that Xerxes is, but when she discovers he's just some shmoe with a sword and a hard-on for Athens, she finds him instantly repulsive. (This revelation occurs during an aggressively pitched sex scene, so there's quite a bit to unpack here.) The problem is that toning down his character to such an extent is a pretty effective way of making us not care about him at all, not to mention any of the soldiers in his command.

Only when Queen Gorgo and her men arrive at the end of the film do the Greeks finally have a compelling leader, but by this point it's too little too late. 300: Rise of an Empire winds up precisely where the original film did: with a legion of soldiers charging the camera to attack a faceless enemy somewhere in the audience. With so much wheel-spinning and mindless dismemberment at work here, this is much less a feature film and more like a visual companion book in cinema form.

MINORITY REPORT: I still want to know how the director of Smart People got this gig. In 2008, he made a mediocre dramedy starring Dennis Quaid and Ellen Page, and now he's qualified to helm a billion-dollar blockbuster? I don't think Noam Murro exists, except as a figment of Zack Snyder's imagination. - Sean "Keanu Grieves" Hanson