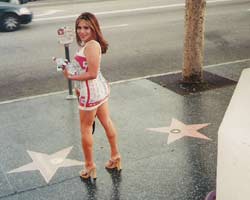 This woman has written nine screenplays.Hollywood kills dreams. A more brutal and efficient destroyer of ideas could not be constructed by the most skilled engineers of death operating on an unlimited budget. Give them a thousand years and maybe they could come up with a Newark or a Dallas, but not Hollywood. Nothing like the hot hate for freethinking that has been synthesized and perfected by the American film and television industries. Walk to 5555 Melrose and on a quiet night you can hear the dead ideas creaking in the dark, like the salt-worn masts of forgotten ships.

The fools who go to Hollywood following their misbegotten dreams will break on those terrible dark rocks of the studios. They come by the millions with scripts, treatments, trailers shot on shoestring budgets and even the occasional independently finished product. They find the dragon's teeth of Paramount, Miramax, Warner Brothers and others waiting to chew them into pulp and spit them out into a waiter's smock at a juice bar on Sunset or face down in the tar pits with a blown-out carotid full of bad junk. If only they'd stayed home in their primitive villages to set their nets upon more easily caught butterflies. 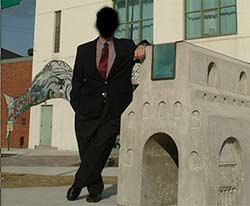 Mr. Orenstein.But what if - and I almost dare not give voice to my idea lest Hollywood hear of it and quash it - those moths drawn to the candle's flame could find their life's aspirations crushed without traveling all the way to Hollywood? What if - and I shudder to suggest such a cruelty should be visited upon my most fiendish foe - the scions of Old Hollywood could be conjured forth to bring ruin upon a dreamer's dream in the comfort of that dreamer's own home? My friends, lives could be saved.

Hold that thought in your mind as I introduce to you George Orenstein, America's Producer. He is a real man, but that is not his name. He is the second highest paid producer of one of the largest studios in Hollywood. Mr. Orenstein, tenuously related to myself, has agreed to act as a proxy for all of Hollywood. He will implore you to reveal your greatest idea, to make your pitch, and with a single-minded fervor he will lay waste to what you hold dear. Perhaps, through some obscure mathematical improbability and a celestial confluence seen only once per eon, Mr. Orenstein will not hate your idea. But don't dare to hope.

These ideas have all been submitted by readers who have emailed me in the past and who I have contacted individually to solicit their pitches. In the future, if you would like to have Mr. Orenstein review your pitch, you can email me with the subject line BURNING PITCH. Do not include completed scripts or full length feature videos, please include only the pitch text itself and, if available, a short excerpt or trailer of your work. If Mr. Orenstein likes your pitch and decides it is worthy of consideration for fast-tracking then he will contact you externally.