I am not afraid of today being 06/06/06, and I'll tell you why. Lady Luck has recently smiled upon me in a way I never would have dreamt possible. I have found that there comes an event in every person's life, at least one event, that causes them to stop what they're doing and wonder: Is this fate? Did some incredible cosmic force cause this to happen? Was this entire universe set into motion so I could be right here, right now, just for this? And I'm starting to think that, yeah, maybe there is something to it all. Maybe it was all planned out just so. Maybe every atom is exactly where it should be according to some grand design.

You see, I found some money. A lot of money. A hundred big ones in a parking lot. But that's not all, because they weren't ordinary U.S. dollars. They were TONYBUCKS.

The bill was sort of halfway wadded-up and lying next to a parked thugmobile that was packed with bad-looking dudes, but I have to say that going after it was one of the best things I've ever done. It was like I had intended to go on a trip to the garbage dump, but the dump had closed and they built the U.S. mint on top of it. Also, there are thugs hanging out near the mint. 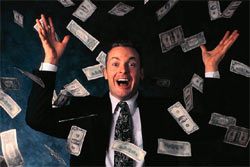 I called some people about this, and the normal reaction was, "You found twenty bucks?" "No, I found TONY bucks." and then after that the subject typically changed, with the person on the other end reminding me I had yet to return something I had borrowed and me hanging up. They probably just didn't understand that TONYBUCKS are better than American money, because Tony actually sat down and made it, or at least someone on Tony's behalf. Whatever the case, a Tony had something to do with this and I have never known a Tony to be anything less than completely honorable and kind. Except for Tony Soprano, but not only is he fictional and therefore not real, but he's also on TV, which makes him double unreal. Double negatives don't count in this situation because he's on HBO, and they don't play by the same rules.

Whoever he is, I have to salute him. It's this kind of radical free-thinking that gets us things like America and most of the items at Spencer's Gifts. Our whole human civilization, in a way, runs on ideas. In fact, I think if you took the two main "pillars" of Spencer's Gifts, old age and farting, and combined the two you could run that whole operation out of business. Just print up some mugs and shirts that say, "I'm very OLD now, and by golly, I LOOOOOVE TO FART!" with "LOOOOOVE TO FART!" in a larger, wackier font. I don't think they've done that yet, so it's bulletproof. How many times have you been in Spencer's before Grandma's birthday only to find yourself torn between that "over the hill" mug and the fart starter pack (containing whoopie cushion, fart sludge, "Caution: Beware of farting lady" t-shirt, and fart whistle)? The fart / old combo is so cutting edge they won't know what hit them. Trust me, you'll be a billionaire--nay, a Tonnionaire--in no time.

Of course, once you have tons of Tonies you'll want to spend them on something. For that, we can consult the reverse side of the bill.

Going by the legend here, this bill can afford me one Tony love, two dishes, or ten Tony kisses. I'm not prepared to commit financially to any of that until I can get some clarity on a couple of these terms. Does "dishes" mean Tony will do the dishes, or just put them in a dishwasher? Fifty bucks is waaay too much for a Sears-Kenmore job. And regarding Tony love, I'm not putting down $100 for anything less than complete, eternal adoration. If it's just a passing thing he can forget it. Money doesn't grow on trees, especially the kind where the guy on the front is wearing shades.

Benjamins? Who needs 'em?Another question that came up was why Tony was in need of his own currency in the first place. There are several working theories.

UNLIKELY: A young boy made it for his parent on Mother's or Father's Day. Smart kid, because not only did it not cost him anything to make, but it also sent the parent a very important message: I could love you if you don't make me do dishes.

POSSIBLE: A husband, driving home from work in the late hours of February 14th, realized he hadn't gotten anything for his wife for Valentine's Day. After visiting several stores and finding nothing, he scribbles up a bill which she can use to purchase services from Tony, her husband.

LIKELY: A husband, driving home from work in the late hours of February 14th, realized he hadn't gotten anything for his wife for Valentine's Day. After visiting several stores and finding nothing, he scribbles up a bill which she can use to purchase services from Tony, their gardener.

NEARLY CERTAIN: The United States recently switched back to a fixed currency system, this time based on Tony instead of gold, and we just haven't heard about it in the news because it doesn't concern celebrities, war, or missing girls.

Also, I don't know if I should even be telling this, but I spent the evening yesterday counterfeiting Tonies and it's gotten to the point where now I have close to a grand. Mine are done in Sharpie and the artwork is a little better, but nobody should notice if it's just a quick glance kind of thing. I figure if I should ever meet him I'm going to cash in bigtime. Wherever you are, Tony, I've got lots of dirty dishes.