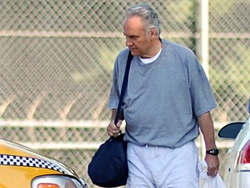 On September 2nd, 2009, Ohio Congressman James Traficant was released from prison after serving seven years for a bribery conviction. The few photos available of this great moment show a man who looks dismayingly normal.

There was no goofy speech about birdcages and beaming up. Gone were the bird's nest pompadour, the denim suits, and the skinny ties. The new Traficant is tamed.

Back in 2005 I wrote an open letter to James Traficant in which I heralded him as a hero and applauded the bizarre speeches he used to give on the floor of the House. In these speeches Traficant would address relevant topics or bills under consideration in his unique way or, more often, digress into whatever unusual news item caught his attention that morning. 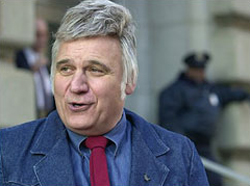 These one-minute diatribes were peppered with Traficant's catchphrases, including his incredulous appeals for the Speaker of the House to "beam me up" and a yielding back of his time that defied the specifics of procedure. He also enjoyed sharing his bodily functions with the House and more than once threatened them with "emissions."

Traficant's politics were hard to pin down. He was a pro-union blue collar democrat, but he also supported Republicans on social issues ranging from abortion to prayer in school. He became such a problem for Democrats that he was eventually stripped of all committee positions, a punishment not even meted out to the likes of Joe Lieberman, a man who left the Democratic party and campaigned tirelessly for the Republican presidential candidate.

The Memory Hole maintains an archive of Traficant's speeches from 1997 through his 2001 farewell speech. Each of the speeches is a goofy gem. Take, for example, his 1998 voicing of support for an Oklahoma bill allowing for the castration of rapists.

ON THE CUTTING EDGE IN DEALING WITH RAPISTS
March 4, 1998

Mr. Speaker, the Oklahoma Senate passed a bill to allow castration of convicted rapists. That is right.

Castration. Opponents say it is cruel. Victims say it is about time. I say hats off, and anything else off, to the Oklahoma Senate.

Maybe, just maybe, Mr. Speaker, rapists will not only think twice, they will start thinking 3 and 4 times before they brutalize our constituents.

I also would like to say that no matter how you slice this, Mr. Speaker, Oklahoma is on the cutting edge when it comes to dealing with rapists. For those who say, `How do you really feel, Jim?' I recommend that Oklahoma go a step further. Put it into law, then hire Lorena Bobbitt to administer the program.

I yield back whatever might be left after Oklahoma is done with rapists.

Although James Traficant's political views often did not align with my own, I always admired his willingness to craft speeches tackling any subject for very little reason. I bemoaned the loss of craziness in Washington with the bribery conviction and expulsion of Traficant. I wished the whole of Congress was more like James Traficant.

Those who dare to speak truth to power are silenced and ridiculed. The time for change through normal means has come and gone.

That's why we need someone who can speak something much more important to power than truth has ever been: crazy.

Some mondo jerk in Traficant's local newspaper disagreed with me, citing my article and the ridiculous hyperbole of politicians like Sarah Palin and Michele Bachmann as a sign that more Traficant was actually a bad thing.

Years after Traficant was put away, Parsons said he may have got his wish to see that kind of rhetoric return to national politics. Today's political rumors of health care bill death panels seem to come from the same wildness Traficant had, but they seem less fun than he hoped, he said. Parsons said he thinks Minnesota Republican Michelle Bachmann is carrying Traficant's torch for that kind of public speaking, but he doesn't seem happy about it.

"The fact that it became such a driving force in politics is kind of disconcerting. ... 'Death panels' are kind of humorless. I guess I got what I wished for and it turned out not to be so good," Parsons said.

I couldn't disagree more with this moronic piece of crap. I stand by my original statement, and not "kind of" stand by it like Mister-Qualifies-Everything in the Tribune article. James Traficant's imprisonment was a dark period for our country and evil Muppets like Michele Bachmann hardly filled the void. he left in Congress. We are forced to wonder what James Traficant might have said about the issues confronting the United States today. 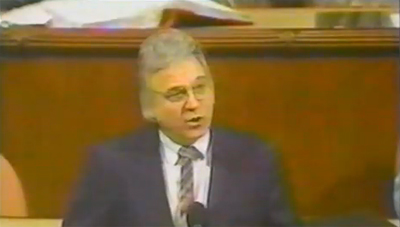 Madam Speaker, we are sending 900 trillion dollars to the bank for the privilege of paying the CEO's bonus. Good money after bad. This is supposed to be stimulating? Give me a break!

The hardworking are having a hard time and we don't have any solutions to these hard problems. How about investing in a product that works? I propose we stimulate every American with 24 pills of Viagra.

I yield back the savings to our healthcare system by eliminating late night stubbed toes. 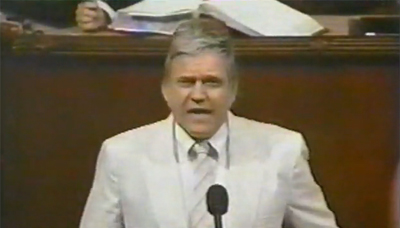 WHAT ABOUT A BAILOUT FOR OLDSMOBILE?

Madam Speaker, I only buy Oldsmobiles. I drive a 1994 Oldsmobile Cutlass Ciera and I could go right over the top of a Honda. In this day and age what America needs is a Newmobile.

Unbelievable. We are bailing out the foreign cars and letting the Cutlass go the way of the Dodo.

Forget those hybrids. I produce enough gas for an entire fleet of Oldsmobiles. My emissions are green. Stand back when you hear the rumbling.

Madam Speaker, I yield back the formula for my bean-based biofuel free of charge. 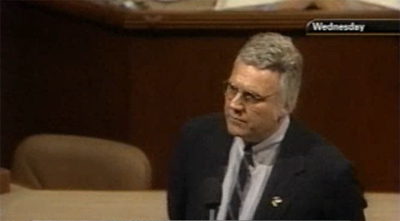 THE PUBLIC OPTION IS SOME FAIRY TALE

Madam Speaker, somebody in Washington is trying to tell a fairy tale about America's health care. 47 million people don't have any insurance and they think having the IRS write prescriptions for your mother is the way to cure what ails us. Beam me up.

A kiss won't turn that croaker into a prince. I say we can learn a lot from our amphibian friends. What we need is a public hoption to get us out of this mess.

I yield back my time on this wild ride to Mr. Toad.

My greatest wish is that James Traficant were still around to hold some town halls. The prevailing atmosphere of hysterics and crazed accusations would mesh well with his cornball metaphors, fictional statistics, and bad policy positions.

Okay, so maybe that guy in the Tribune was right and America wouldn't be any better off with James Traficant still in Congress. Sure, he was a crook with horrible politics and few redeeming political beliefs. At least we'd be having more fun.