To Whom It May Concern, RE: Men's Bathroom

Whether this is intentional or not, to whomever keeps forgetting to put the plunger back where it belongs-- next to the commode in the men's bathroom-- thank you. No, really, thanks. I'm serious, you are much appreciated. You see, when my solid recent past is gurgling back up toward me and threatening to soak my shoes and dropped Dockers, the last thing I want to see is the plunger that belongs there, next to the toilet. Picture yourself there. Time for a pop quiz, hotshot. The water is rising, you have maybe 15 seconds to disaster. What do you reach for? Definitely not the plumber's helper, the thing designed for this. Something like that should be nowhere near this notoriously pluggable john, so I salute you! You had the courage and bravery to put it somewhere else entirely, where no one could find it. Not even me, the office worker with a renegade turd loose and sliding under the stall wall, never to be seen again.

We, the employees of Can-American Rubber Products Corp., live in a society of courtesy and respect. Not everyone has the kind of talent it takes to pull their weight at the third-largest rubber concern east of the Mississippi. I, personally, was forged by years of sub-par jobs, relationship problems, a revolving door of stepdads, and other character-building events to become the INFJ I am today. Consider this your ultimatum to alter your behavior and make sure you put the plunger back where it belongs, sitting atop the brown ring on the tile that marks its standing position. 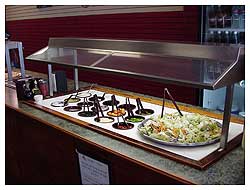 I was a manager at Pizza Corral before you were even born, probably, and you really don't know what you're up against. In fact, this month is the 18th anniversary of the worst disaster we'd ever seen at the Corral. One September afternoon, during the big lunch rush, about 10 folks (who looked to be carny-folk, or at the very least, workers from some type of poor people office) all came in and bought a single salad bar plate. Then they took turns using it, one by one. This obviously was not in the spirit of the salad bar as it was intended by the founders of the restaurant, and it was up to me to put a stop to it. After asking the person using the salad bar plate at the time nicely, being ignored, then asking the next person, I began being pelted by cherry tomatoes from one of the young carn-lings, who was pulling more out of his pockets just as quickly as he was throwing them.

Taken aback, I returned to the kitchen and came out armed with a pizza box attached to my forearm, much as a medieval hero would wear a shield. Putting it out in front of me, I was able to approach the vagrant table to rip the styrofoam plate in half and ask them to leave. They shuffled out, leaving the place smelling like cigarettes and blue cheese dressing.

Then, just as we'd returned to normal, the lead carny returned with two large dogs, who right away jumped into the salad bar (Yes, inside the sneezeguard) and began devouring the sliced beets, thousand island dressing, and what was left of the cherry tomatoes. In fact, the bigger dog, which was male (very, very male) focused on the tomatoes in particular so passionately that it began growling and snorting as it watched the other diners and inhaled what was left in the aluminum tray. 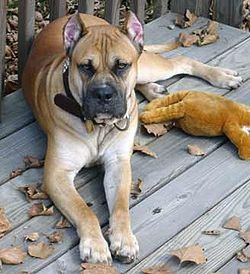 I shouted at him to leave and take his dogs, but I was ignored. The salad bar was practically destroyed and whatever food was good before was contaminated by dogs with skin conditions or eaten by now. I threatened to call the Pizza Corral corporate offices in Dayton, and then even the strip mall security guard. It was around that time that the male dog began regurgitating.

These dogs were very large, probably 90 pounds each. They could eat a lot, but it seems the male couldn't stand an entire salad bar's worth. He became remarkably ill for a dog, covering most of the salad bar and a good portion of himself in red, slimy tomato vomit. At last, the carny showed some emotion and cried out that Rat-Bones was getting sick again, and that he needed to have his sinuses sprayed out with a Waterpik or else he'd have to go to the vet. I went in the back to make my call to corporate, and around this time they left of their own volition. Neither we, nor any of the 9 regional Pizza Corral locations ever reported seeing them again.

I could go on for hours, but let me put it to you plainly: I didn't go to community college for 28 months to become your human toilet / fun time prank victim.