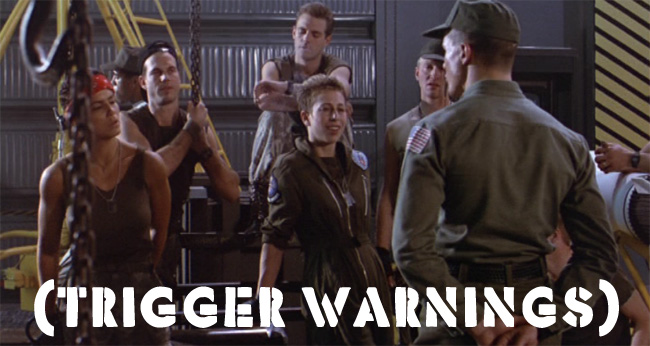 Sit down, Grabowski. Who is that? Corporal Mason, zip it up. We don't have time for horsing around today.

The Screeg are breathing down our necks and I need to get you all up to speed. Alright, Marines, before I begin with the tactical update I need to cover some ground mandated by the battlefield wellness officer.

Please be aware that the following tactical update may contain problematic information that will trigger an unwanted emotional response.

I'm just going to go through this list of triggers as quick as I can and I want you all to shut your mouths and open your ears. If you hear something you don't think you can handle, uh, go into the other room behind the sealed bulkhead and...sit your ass down Mason. Listen up.

Please do not listen to this tactical update if you are sensitive to images of marines being cocooned into implantation husks, body reorganization, skin repurposing, color changes, odd textures including wood, woven metal, ovipositor mucoids, synthetic carpet fibers, or chalk dust.

As part of this tactical update I may play back one or all of the following sounds that may trigger unwanted reactions: high-pitched chirps, sinister tones, clacking claws, scurrying, somebody chewing ice behind you in the movie theater, derisive laughing, friendly giggles, masculine guffaws, tyke yawps, cat fighting sounds, wolf whistles, judgmental snake hisses, somebody making a spring sound representing their erection, glass breaking sounds, coconut horse clops, whale song fatphobia, and the ableist bigotry of prairie dogs.

I may reference, either comically or seriously, the smell of B.O., semen everywhere, jacking off, jilling off, ralphing off, whatever euphemistic term refers to a creature with an exoskeleton covered in ribs stimulating itself to orgasm, urine, feces, or marijuana. 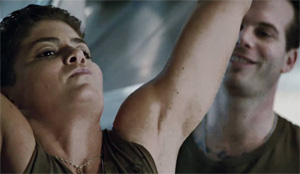 I may refer to your "balls" regardless of your gender. I may use misogynistic generalities to refer to coming battles with the Screeg. I may call one or more of you a "pussy" even though I do not mean anything insulting to the brave women and male to female transsexuals serving in our units.

Before...what is that banging sound? You hear that? Dobson, Mittlemeyer, go check that out.

Before the tactical update is completed I may present video capture from helmet cams during last week's battle aboard the Yamato II. Some of our marines in this video may make offensive or bigoted references to the Japanese, Chinese, Vietnamese or Laotian. They may make fatphobic or anti-Neptunian comments. They make refer to balls in a positive, gender-biased manner.

At least once I may slip-up and make a condescending reference to Islam. I may say negative things about cyborgs, bioborgs, bioroids, androids, or destroyomechs. I may describe hand-to-hand combat in general terms. I may use violent gestures. I may raise my voice. My tone may remind you of your father or that you never had a father. Something, somehow is probably going to come across a little rapey. Just putting that out there.

I may refer to killing or mutilating the Screeg. I may...

Oh, shit, they've broken through the perimeter. They're inside the point defense system.

Alright, nobody panic. Just stay calm. Forget what I just said about those triggers.

I need to read you the pre-engagement trigger warnings.

Now, as you prepare to enter combaaaaaAUUUGGHHH! They've got me! AAAAAAAAaaaaaa!

Protect yourself from every problematic thought by following Zack on Facebook.