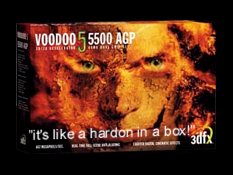 San Francisco, CA - In a formal press release read to major gaming sites, 3DFX has "one upped" the video card war by telling nVidia to "fuck off and die".

3DFX, known for its revolutionary line of "Voodoo" based video cards, has been under fire recently for losing its competitive edge to nVidia, who's GeForce 2 line of cards is speculated to be slightly faster than the upcoming Voodoo 5.

"Quite frankly, I'm sick to death of sidestepping the issues and trying to be 'Mister Nice Guy'. I hate nVidia and every fucking asshole that works there," quipped Brian Burke, 3DFX's PR spokesperson. "I hate their engineers, distributors, advertisers, executives, and janitors. I especially despise Derek Perez, who I formally challenge to a knife fight in the parking lot after this meeting." Brian then proceeded to inflate a Derek Perez doll, which he began frantically punching in the face and shrieking "I HATE YOU, I HATE YOU, I WANT YOU DEAD YOU BIG STUPIDS!"

Burke passed out a 3DFX formal press release, which contained many things not even we are able to print on this site, language so offensive that it would make Jim Rose blush. The following excerpt was highlighted and underlined by Burke, who read it out loud to the gathered group of press:

"We're really damn sick of hearing all this shit about nVidia. They're a bunch of asshole punks. I mean, they claim they're going to release a card at a certain speed, then they release it a MUCH SLOWER SPEED! You know what kind of people do that? Pedophiles. If you want a kickass card, go with the Voodoo 5. We've got tons of killer shit like motion blurring, 4x anti-aliasing, T-buffer stuff, and a ton of other shit that will just blow your mind. nVidia's got a higher clock speed and some gay hacked drivers. How fucking lame. Hey Derek, give me a call when nVidia has made enough money to pay your phone bills, you stupid lying sack of crap! Fuck off and die, you assholes." 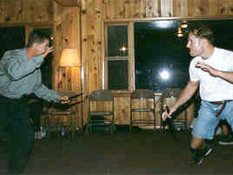 Burke and Perez square off, shortly before Brian's dad got home and "busted em". Burke was grounded for a week, and Derek's parents were notified and are reportedly "real pissed".

"As you can see, nVidia is scientifically proven to be a card built for 'pansy ass queers'. Anybody who buys a nVidia card will immediately find themselves attracted to members of the same sex, and will develop a sudden lust to shove objects into their rectum," Brian stated while making frantic pelvic thrusting motions. "Hell, if you even look at a nVidia card, you might feel the urge to dress up in your mom's clothing and perform sexual activities with your pet dog."

"Brian Burke obviously has some severe mental issue, perhaps stemming from the time he was caught by the Police, attempting to solicit sex from a horse. Or perhaps all that glue sniffing aided in disintegrating the remaining six or seven brain cells he had left. It's apparent you need some sort of mental handicap to be employed by 3DFX, and Brian's showing off this characteristic wonderfully."

When asked about Burke's assertion regarding nVidia's track record of releasing cards that don't match their stated clock speed, Perez responded by shouting, "OH YEAH? Well what about 3DFX's shitty drivers, huh? You ever think about that? You ever play Quake 3: Arena on a Voodoo 3? It looks like pixelated SHIT! Those stupid jerks are just jealous 'cause our card is faster and quicker and nicer and cheaper and cooler than theirs! 3DFX has got all this lameass motion blur shit because they don't want you to see how God-awful their graphic rendering is!" When questioned about reports which claim 3DFX's image quality is much more sharper and colorful than the GeForce 2, Perez began to hum "Row, Row, Row Your Boat" loudly and shout, "I CAN'T HEAR YOU, I CAN'T HEAR YOU, LA LA LA!"

A representative from S3 called a press conference shortly after nVidia's, but had to cancel it once McDonald's told them they weren't going to let any reporters into the restaurant for their "silly little computer thingy."

"Derek Perez wants to sucker all of you into believing the lies and half-truths regarding their candy-ass line of GeeFarce 2 cards. If you're a stupid moron who believes whatever they're told, then go ahead, waste your money on the lump of plastic and Radio Shack parts they're calling their 'nextgen' card. See if I give a shit. But when your balls start shriveling to the size of raisins, don't come bitching to me. I'll be sitting back and enjoying the lightning-fast speed and Hollywood special effects that the Voodoo 5 has to offer," Burke commented while walking offstage, shuffling his feet and mumbling to himself.

Perez responded by remarking, "I can see how Brian might be angry, what with his erection problems and all. The fact is that our GeForce 2 card is approximately 59 times faster than their weakass Voodoo 5, and Brian's just pissed because the carnival turned down his resume to be a mutant freak who juggles kittens and eats glass. Plus, our video card doesn't need to be hooked up to a cold fusion reactor just to be powered, unlike their stick of engineering failure they call the 'Vooduh 5'."

A fight between the two was scheduled to take place at 11:00 pm down in the parking lot of the Arby's on 13th street, but had to be rescheduled once they found out that Mark Rein and Jason Hall were in the middle of a knife fight at that location.