What Astronauts Miss Most 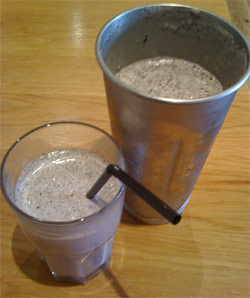 It doesn't really taste good...because it tastes fantastic. What do I miss most?

I was getting to that!

I miss foods mostly. One of the things that rules about being in the USMC is that you get to pound chow 24/7 because you are a ice cold killing machine for Uncle Sam. To keep in top physical shape you have got to fuel up and that means hot dogs, pizzas, milk shakes and whatever else you can think of. When I’m in a hurry and I don’t have time to chew my way through 20 tacos or two boxes of Lucky Charms I like to make a BBQ ribs milkshake. Here’s the recipe.

1 large milkshake, I like vanilla, but strawberry and chocolate are good too. None of those messed up flavors like egg nog or mint.
4 pounds of ribs
+ add extra packets of BBQ sauce to taste

You can also mix in a couple hard boiled eggs if you want. The trick is you gotta carry a cup around with you. I’ve got Big Monster, this 70 ouncer I picked up on leave in Surinam. It’s the largest cup allowed by law in the USA. There is actually a detachable smaller sipping cup, so you can set the Big Monster on the seat next to you in the car, put the seat belt on it, and then dip the sipping cup in for refills.

So what you gotta do is take the milkshake, dump it in the Big Monster, then just drop the ribs in and stir them around real good. I use my Ka-Bar or my Beretta, but if you don’t have those you can just use a folding bald eagle buck knife or something. Wooden spoon. Civil war chess pieces, whatever you got handy. Little buddies, I have stirred that thing up with a rolled up lawsuit for harassment I received right after Desert Storm.

Long story on that, but it turns out they can sue you for just about anything, like standing outside a window, just a public window, on a base at 2:28 AM and looking in the window and not going away when you are asked to go away. I was worried about Tracii though, I thought she was hanging out with this Chair Force Corpsman named Jordan who owned a motorcycle on base even though we weren’t supposed to. Turns out I was right, which I think is why they got rid of the lawsuit, although my lawyer said it was because Tracii was dumb enough to name the Department of the Navy in the suit. 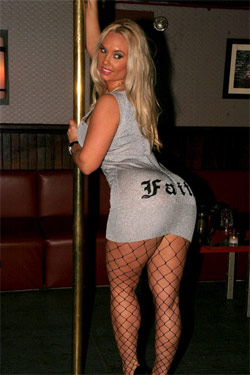 Tracii wishes she looked this good still. This is her like 1998, before her third enlargement and her third husband. Only her and the big man know how many trips to the bad mom clinic she has under her belt. All I know is three of them managed to escape the doctor's vacuum and are living with her ex in Colorado.Whatever, bygones and bygones or what have you. I’m over it. Tracii is ancient history. She is ancient history. Last I heard she had a boob job and was working The Landing Strip outside Wright-Pat doing lap dances as Idaho and telling her regular customers her real name is Francine. Tracii, you’re almost 40, the whole MILF thing is over these days. What is your future? A life of getting stuck pulling all-nude Tuesday shifts doing hop and grinds for dollar tips, that hatchet wound of yours so close to some fat ground crew NCO he can see your episiotomy scar. Poor guy will catch a whiff so bad he puts a gravy pan on his lap and starts buying you cranberry juices.

Shouldn’t have effed me over, Tracii. Now look at where you are and look at where I am. You’re pulling leg muscles trying to earn enough for a lift and tuck and I’m on top of the world. Literally. I am literally above the effin’ world, giving orders to doctors and taking dumps while staring at the Great Wall of China out a window.

I also miss being able to go to movies whenever I want. Sassiest Sluts of Stalingrad is great and all, but sometimes an astronaut just wants to watch some Transformers get revenge on a fallen or whatever. Just want to kick back and relax.

To be honest, the other thing I really miss is p-word. Make of that one what you will, but it’s all d-words up here and a c-word that is so crusty you could stick a thumb in her and come up with an apple. Eff that. I’ll just zero g jerk it, which is awesome in its own way but it is hell to clean up. You go back in the specimen module, lock the hatch, try to imagine that broad from the Transformer movie doing kegels on your unit. Harder than you’d think when you keep bumping into a cage full of floating rats that get all pissed off or you make eye contact with a frog and he just looks like he is judging you.

Even if you pull it off you’ve got a mess floating around everywhere, a couple of pencil-necked nerdlingers pounding on the hatch demanding to know why the fluid leak sensor is going off while you’re trying to Pac-man your evidence with a handful of sock. Can’t even use paper towels or anything.

Basically, kids, space is hell. The only thing worse than space is being a 38-year-old stripper engaged to a Sergeant who works as a glorified baggage handler and wouldn’t make aircrew if we were drafting everybody to fly jet fighters against aliens. So those are two career options to cross off your list. No charge for the life coaching.