Hell In a Decorative Handbasket

The holiday season is bearing down on us like a renegade steamboat speeding down a raging river or an eagle shot out of a cannon. There's no stopping it. All we can do is brace for impact.

With our economy in the hands of Mos Eisley bandits and our finances in complete ruin, this holiday shopping season promises to be a grim and unforgiving death march. Gone are the days of recklessly buying houses, cars, and pleasure boats for loved ones. In are the days of adhering to a strict $29.99-129.99 range for gift buying. To survive and maintain the respect and loyalty of your friends and family, you're going to need a retailer that not only understands your budgetary restraints, but also respects your delicate sensibilities and uncompromising taste.

You'll be delighted to know that such a retailer exists, and it's called the Bradford Exchange. There, spilling forth from its horrifyingly malformed birthing maw, is a putrescent pool of patriotic afterbirth and stillborn Americana. Based on that description, you might think that it's all roses, but I assure you these folks carry a lot more than just roses!

Let's take brief stroll into the Bradford Exchange meat locker, shall we? 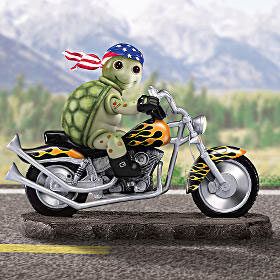 Our friends over at the Bradford Exchange recently discovered an entirely new species to exploit: the turtle, nature's most thrilling and evocative accomplishment. What is most interesting about the turtle--and I think you'll agree with me here--is that it's not a dragon, dolphin, wolf, eagle, dog, or even a Jesus. As such, it opens up entire new artistic avenues. Already there is a glut of fresh turtle-themed products available from the Exchange.

They've got a real gold rush mentality going with the turtle. Case in point: this strange figurine depicting a turtle riding a motorcycle. Nothing captures the outlaw biker mentality more than a cute turtle going on a run, probably headed to some sleazy biker bar for some cheap sex, crystal meth, and hard drinking.

A delightful biker turtle sets out for the open road, "shell-bent" for excitement, in this musical motorcycle figurine available only from Ardleigh Elliott.

If you zoom in real close, you can see that the turtle has earned his red and purple wings, and also sports a swastika neck tattoo. Anyway, how about that beautiful bike he's riding!

His custom "hog" is decked out with hand-applied flames and "chrome" accents for the hottest ride this side of the pond. Plus, this musical motorcycle figurine even plays "On the Road Again."

Early projections indicate that turtle merchandise sales will start slow, but remain steady until somehow coming out ahead in the end. 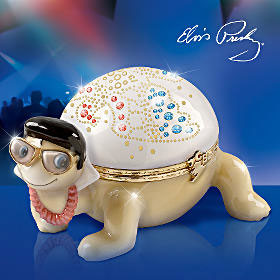 Having harnessed the power of nature's celebrated turtle, the Bradford Exchange is now unleashing a ghastly assault on the senses that can scarcely be comprehended.

We're so many light years off the reservation that I fear my words may not be enough to convey what we're looking at. Language is breaking down here, the laws of physics are melting, and somebody seriously dressed up and painted a turtle to look like the late Elvis Presley. I am by no means an expert on Elvis, but I don't recall ever hearing of his fascination with turtles. In fact, it is within the realm of extreme possibility that Elvis was completely unaware of the very existence of turtles. If someone can prove otherwise, I'm all ears.

As turtles are little more than glorified rocks, it is 100% certain that they possess no comprehension of Elvis Presley. Thus, this pairing makes about as much sense as a monster truck emblazoned with airbrushed paintings of Professor Stephen Hawking.

Colonel Tom Parker really dropped the ball with this one.