The Moon's Luck Just Ran Out 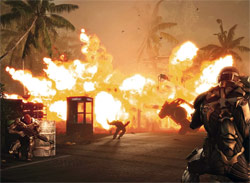 Check out how cool this picture is. This is just a picture from some stupid video game my loser step son plays. It's like 500 times more exciting than that NASA picture and it's happening on earth and not even real. Maybe I should ease up on that kid, but he dresses all in black and his girlfriend looks like somebody rolled a magnet in a drawer of screws.The way it's really gonna work is simple. LCROSS is a big Centaur rocket, one of our freight rockets that goes out beyond earth to do the boring nerd stuff like crash a weather station on Jupiter or send a record off into deep space so that a bunch of nerds back on earth can write poems about how insignificant they are. They only think they're so insignificant because they're a pencil-necked loser. If they were punishing the p-word 24/7 and blasting into space and shooting down MiG-29s in the laser intensity of life-or-death combat then they'd realize that one dude can be pretty GD epic. Nobody wrote the Illiad about Tau Ceti. They wrote it about one dude kicking A-word all over Rome.

Rocks are dumb and don't do crap. Oooh Jupiter is big. Wow. Space is huge. Holy moly what a frigging profound observation, poindexter. You know what's way more profound? A frigging baby farting or some naked lady or something. How did THAT get here? I don't know if it was god or what, but they're doing stuff. They're figuring stuff out, taking off thongs, not just orbiting and spinning around like a bowling ball on a greased plank. 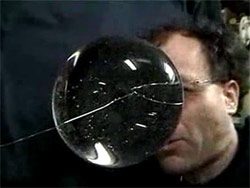 This is science. You are looking at science. Drop out of college now.Whoa, got sidetracked there. Sorry. Nerds just really tick me off. I'm a blue-collar astronaut. Not one of these elitist know-it-all Doctor Do-Nothings that drive me up the wall with their "can't" and "don't" routine. "Don't open that hatch!" they yell. "You can't space walk in a t-shirt!" they scream. Hey, dingus, I went to the same astronaut school as you, I know about stuff like atmospheres. I was just gonna air out those space boots, not go for a jog on your precious fart stink module. Jesus H. I swear you leave the fluid point uncapped on the liquid physics lab for one day/night cycle and suddenly you're Lt. Col. Non Grata.

D-word! My sidetrack got sidetracked.

The LCROSS is going to be launched into space on a Centaur rocket, which usually takes garbage to some place nobody cares about so we can find out there's methane ice on the 500th moon of some planet you forgot about until you see the name. Like Neptune. Nobody gives an F about Neptune. We could be making it up and not only would you not know, you wouldn't care one way or the other.

So this Centaur rocket is going to run out of juice about the time it hits the moon's orbit. It's going to detach this big computer and camera thing to take pictures, and then it's programmed to drop into a crater. Now, NASA has been saying it's going to make a big cloud of dust and they'll be able to see ice, but secretly it's got a bomb in there. Like probably about 500 macro tons. Huge bomb. 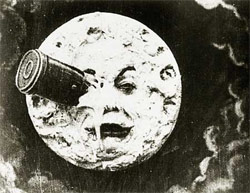 I wish. If the moon looked like this I could just ram its septum into its brain. At 7:30 or something like that the thing is going to blow up. Honestly, they didn't ask me like they were supposed to, but I am not going to say no to a mission like this. I am sick to death of watching saggy arms try to measure ripples on a sphere of vegetable oil or the Russians doing their experiments with the tennis ball and the lighter fluid. Still haven't figured that one out, but they've got a baseball bat and all of the other crew members are upset, so I figure just let them do whatever they want. Besides, those guys fist fight for like ten minutes every day, which terrifies the rest of the crew but I think is hilarious. I could take them both.

So space nerds, kids, tune in to TV or look through a telescope or something and stare at the moon and maybe you can see a little tiny blip on the moon. NASA are a bunch of idiots so it won't look cool or be exciting at all, but remember: USA rules over the moon. Nobody can do science like us. Check it out. It's like on a Friday I think.

F the moon. It deserves this after all the S it has pulled. See ya!