Editorial: Criminals Do Not Deserve Twenty Seconds to Comply 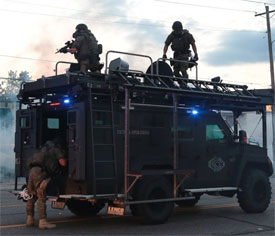 At least human police officers are allowed to judge a situation and act. ED-209 is hindered by rules imposed by those who do not understand real policework sometimes requires immediately using cannons.You've heard a lot of crowing lately about ED-209. The pro-crime left wants you to believe that just because it is a robot, it cannot effectively police a human population. As usual, the Mel Sharpens and Jeffy Jaggums of the world want you to worry more about criminals than our public safety.

Once you put aside the scare-mongering about militarizing the police force with remorseless killing machines equipped with cannons and you look at the statistics, you see that human on human deaths vastly outpace any ED-209-involved shootings. Last year there were upwards of 500 murders in Chicago alone and yet Chicago is refusing the ED-209 unit. Do you know how many fatal shootings the ED-209 was involved in last year? Fewer than 500. Try more like 100. Which is actually lower than human police statistics for the same patrol routes.

In fact, critics of the ED-209 program on the other side of the spectrum, myself included, argue that catering to pro-crime sensitivities has neutered what could have been a much more successful program.

Currently, ED-209 demands 20 seconds to comply. This often gives criminals a chance to escape or conceal weapons in a way that ED-209 cannot detect. Every week at least one sexual assault is committed while ED-209 is counting down from twenty. If ED-209 treated a criminal like any other human police officer does then it would be allowed to engage with just one second to comply. Long enough to blurt out the warning, "Drop it!" before firing its dual cannons and launching rockets. 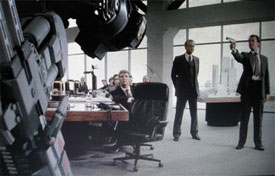 Imagine if the Secret Service gave assassins 20 seconds to put down their weapons, Mr. President. How safe would you feel?How many mothers are we going to allow to be killed by Nuke junkies in the ghetto just to appease the emotional appeals of drama-merchants? The statistics don't lie. When ED-209 is loudly stomping around your neighborhood making growling sounds, citizens are far less likely to behave like violent animals. Race hustlers want you to think it's a black/white thing. That we'll only put ED-209 in black neighborhoods. Historically, that might be true, but if any white neighborhood had the same crime rate as a black neighborhood, I would be all for deploying some ED-209s.

For some reason, and I'll leave it to the scientists to figure out, white people don't riot. They don't constantly murder each other in the streets. So they don't need ED-209 to keep their streets safe.

Mr. President, if you really want to cut crime and handle these riots that have been cropping up, then deploy those ED-209 units and reduce their compliance timer drastically. A lot can happen in 20 seconds. Imagine if your wife was being held at knife point by a terrorist. Would you rather ED-209 be able to act immediately, launching a rocket through her skirt, or do you want to wait for him to count down? What would Secret Service do? I think we all know the answer.

In the interest of Full Disclosure, this publication is sponsored by Full Disclosure, the new TV series from Omni Consumer Products, the makers of ED-209. In the underworld of Old Miami, Mutt Primo must find his runaway daughter and bring the men who are trying to corrupt her to justice the only way he knows how: with shotguns. Full Disclosure 8/9 central on the Action 8 Tuesday Action Block.