USA! USA! USA! or This Update is Unconstitutional! 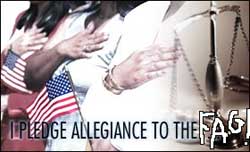 I stole this picture from CNN.com and added that witty remark at the end using Adobe Photoshop 6.0 on Windows XP with 512 megs of RAM.

We all have certain things that we love or hate about our childhood. While I won't necessarily dub my experience growing up as "the best time of my life; two thumbs up," I certainly will not claim it was like the classic movie "Flowers In the Attic," a film about a generous old woman who trapped her grandkids in a room (the attic) and expressed her undying maternal love by feeding them poison cookies until somebody eventually stabbed her. However, there were a few annoyances I experienced which I will never force upon my children, assuming some day somebody tells me how kids are generated. I think it's a process that involves roofies.

The biggest complaint about my childhood revolves around being herded into church multiple times a week. My parents wanted to trick me into thinking they were very religious people, so they requested that we all attend church a few times a week and fool ourselves into thinking that this somehow made us better people. Now I certainly have nothing against organized religion; I think its admirable how those guys wearing bathrobes onstage have been able to successfully use their Hypnotizing Church Mega-Ray Beam to melt the brains of followers for decades. However, there's not a single place in the universe that any kid hates more than church. I was fortunate enough to have parents who chose to be Catholic, a religion that is very popular amongst white Republicans and various other people who refuse to embrace the witchcraft voodoo of the "wrong" religions.

Catholic churches are like really boring calisthenics courses. You walk in, kneel to the ground, sit in a pew, kneel to the ground, sit down, get up, kneel down, sit, get up, kneel, sit, kneel, red light, green light, Parcheesi, no Whammies, no Whammies, stop! During this knee-ruining exercise some really boring old guy occasionally hands out church menus that describe the main religious courses being served up that day. If I can remember correctly, these Bible Buffets always contain such gems as: 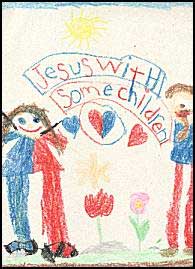 Jesus, as seen through the eyes of a really stupid kid or a retarded adult

Maybe I'm just a shallow, bitter man because I really loathed being forced to worship God and go through all these silly meaningless actions such as reciting prayers or repeatedly telling a stranger that you really agree with the teachings of "that Jesus fellow." I think parents should wait until their child gets old enough to actually understand religion before they decide the child should worship a certain god in a certain way on a certain day. Prayers and holy text are just meaningless words to a kid, ranking up there with memorizing Civil War battle names, geography, and the Pledge of Allegiance. Luckily for all of us shallow, bitter adults, we can now rest safely at night and know that the children of tomorrow will be at least protected from one of these harmful items thanks to the recent ruling by a California federal appeals court claiming that dastardly Pledge of Allegiance is unconstitutional:

A federal appeals court ruled Wednesday that the Pledge of Allegiance to the U.S. flag cannot be recited in public schools because the phrase "under God" endorses religion. In a 2-1 decision, the 9th US Circuit Court of Appeals ruled that reciting the phrase was a violation of the constitutional separation of church and state and amounted to government endorsing religion.

Circuit Judge Ferdinand Fernandez, who agreed with some elements of the decision but disagreed with the overall opinion, said phrases such as "under God" or "In God We Trust" have "no tendency to establish religion in this country," except in the eyes of those who "most fervently would like to drive all tincture of religion out of the public life of our polity... 'God Bless America' and 'America the Beautiful' will be gone for sure, and while use of the first and second stanzas of the Star Spangled Banner will still be permissible, we will be precluded from straying into the third. And currency beware!" 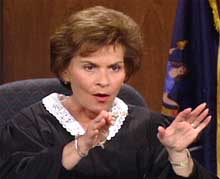 Judge Judy, who is a judge just like those other judges. Her response to this federal appeals court ruling? "I'm the boss, applesauce!"

Whew! That was a close one! It's really good to know that our taxpayer money is providing wealth to these people who make such important decisions and impacts in our boring lives! I fully support giving cash to judges and attorneys who spend months arguing about crucial things like analyzing how muttering the word "God" turns children into violent religious zealots, much like how that secret military gas turned dead bodies into CHUDs. Also, I think we should fill up a few more barrels with money and give them to the government so they can buy more useful Anthrax-detecting machines, fight their successful war on drugs, and run anti-smoking ads that feature groups of ethnically balanced children. I can't count the number of weeks I have spent curled up in the corner of my apartment, paralyzed with fear and drenched in sweat, worried that somebody would make me say the Pledge of Allegiance and I would naturally be forced to turn religious. Thank you very much, Miss Lippy!

While this ruling is definitely a breath of fresh air inside a dank YMCA men's room, it leaves us with another problem: what do we force kids to say in the morning of each school day? There's now an empty space in between the principal's announcements and Homeroom period, one that is not tarnished anymore with the stain of God. Luckily I have a solution for this and feel there's a safe, easy way to promote blind faith in our country while refusing to acknowledge any form of religion whatsoever: the theme song from G.I. Joe.

If you were never a kid or you were really lousy at being young when you were a child, let me take a moment to explain the central theme of G.I. Joe to you. Cobra, a group of foreign terrorists whose main goal was to have each of their silly schemes thwarted within 30 minutes or less, wanted to take over the world in the most bizarre and inexplicable way possible. For example, instead of launching nuclear missiles and killing millions, Cobra would launch missiles full of pink gas which turned people into zombies who danced uncontrollably when hearing the song "Don't Cry, Daddy" by Elvis Presley. Cobra would then smuggle speakers inside a popular toy teddy bear which all the kids were buying and then, at the stroke of midnight, they'd play the song and (somehow) try to take over the world by kidnapping a prominant scientist. The key to capturing worlds always lies in kidnapping prominant scientists. G.I. Joe would then catch wind of their plan and foil it by introducing as many distinct collectible characters as possible, each of whom shoots a blue laser gun that makes enemy helicopters explode and teleports a parachute onto the back of the pilot. G.I. Joe taught us American kids that the United States of America is truly the only thing protecting us from the tyranny of other rogue countries such as Laos or Argentina.

While I believe that the G.I. Joe song is intensely patriotic and lacks any mention of God whatsoever, I feel that it's kind of outdated. G.I. Joe was created when the US was at war with the evil Yellow Menace (the vile Japanese), the evil Red Menace (the Russians), the evil Brown Menace (the Mexicans), and the reprehensible Magenta Menace (the Moon People). However, it is currently the year 2002 or whatever and I'm fairly sure we're friends with both of these countries because now we have nuclear missiles and all they have is crime. The G.I. Joe song needs a more "international" feel to it, one which can easily be achieved by translating the theme song to Chinese and back to English again by the help of the ever-so-useful Babelfish service, a free utility provided by the same people who invented search engines that don't work and spent millions of dollars building an "Internet Portal" that doesn't work. Although Babelfish seemed to inexplicably change the name of the song from "G.I. Joe" to "G.I. Tall," it's okay because it isn't compassionate to demand people speak proper English. Without further ado, let me present to you the new Pledge of Allegiance, "G.I. Tall": 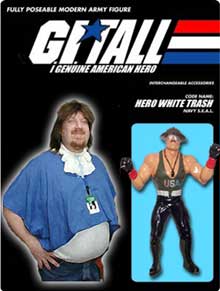 G.I. Tall the fight will be there!

Yo tall!
He for freedom regardless of where has the trouble,
GI tall the fight will be there!

Its GI tall opposition cobra and Destro,
fight preservation day.
He never give, he always are there,
fights for freely in the land and the air.

He never give, he will leave behind the fight win -
GI tall dare.

Imagine the patriotism and lack of belief in God children will have after repeating this song in grade school every day for six years! With the help of one single tune, our schools will finally be able to separate church from state and the nation will be free from the tyrannic rule of God once again! After all, isn't this what G.I. Tall would want?

Sounds like another great gaming experience for Zack. Head on over and share the joy with him!