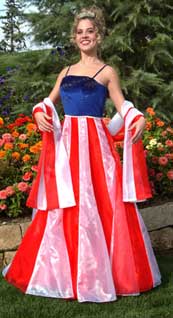 PRELIMINARY NOTE: I put this update up approximately 14 hours ago and I am shocked and appalled at the number of moronic flame emails I have already received because people don't take the time to actually read and comprehend what I wrote. Before you get your panties in a bunch, take a deep breath and think about whether you understand what I am saying. If you honestly think that I am in any way being anti-patriotic or making light of the WTC tragedy then you need to spend less time huffing glue and more time learning about the world. Oh, and you're retarded.

I can't help but notice that lately there has been a real resurgence of patriotism in the United States. I know this to be true because I have used my brilliant powers of deduction to observe the increase in USA flags and bumper stickers adorning the cars and personal belongings of the general populace as well as the tasteful red, white, and blue tie dye t-shirts worn by your average Wal Mart shoppers. I have also noticed an increase in late-night infomercials promoting USA watches, posters, clothing, hair accessories, make-up, knives, coins, and children. Those USA brand children are a rip-off, though, trust me. They break in a week, tops.

I can only assume that from the increase in USA merchandise that people feel more passionate about USA #1 USA #1 these days. The cause for people's sudden decision to support our great nation via owning a bunch of over-priced crap most likely stems from the World Trade Center disaster or possibly the Chandra Levy mystery. That Levy thing had me on the edge of my seat for weeks and I still have nightmares about it. But after the tragedy in New York, everyone ran around for a few days buying gas masks and bottled water and fearfully looking up at the sky. When nothing bad immediately happened, no more planes were crashed into large buildings, and all of the people of Arabic descent were rounded up and herded into a large pen that closely resembled jail, people decided that the best thing to do would be to buy things with "USA" or "NYPD" / "NYFD" printed on them. This was fine because at the time everyone was pulling together to show support for New York and the folks at the Pentagon and that town with the funny name in Pennsylvania, Shanksville. Heh, it's an entire ville full of shanks. That's a lot of shanks. What would people do with that many shanks? But anyway, it has now been over nine months since September 11th, and the stupids are trying to cash in. 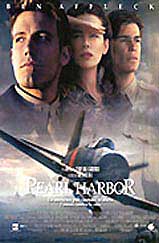 If you read popular news sites or watch television about September 11th, you are likely to hear some sort of comparison between the World Trade Center and Pearl Harbor. Pearl Harbor happened a long time ago, like in the 1800's sometime or something, but it was the last time that the United States had been attacked on its own soil and it wasn't really on the same scale as what happened in New York. I suppose it was the fact that it happened back in the day that made the movie people think that it was ok and fine to make a crappy, saccharine, romance film about it. I guess it was also the time factor that created the legions of Pearl Harbor collector plates and other crud with World War II planes and US flags on them. I can't help but think that 50 or so years from now some moron will take it into his or her pretty head to make a movie about September 11th that revolves around one star-crossed couple one of whom gets crushed to death underneath five tons of steel and burning jet fuel. It'll be a box office smash. Get it? Smash? AAAHAHAHAHAHAHAHAHA. That was good. But I still don't understand why tragedy plus time equals profit.

The interesting thing will be to see what sort of collector plates they can come up with for September 11th. With Pearl Harbor there are cool World War II planes that they can use or maybe those neat old battleships. People wouldn't mind hanging things like that on their walls. And there's always the US flag or a picture of Hawaii to add in for flavor. But there was just nothing cool or picturesque about the WTC that would ever make a good plate. 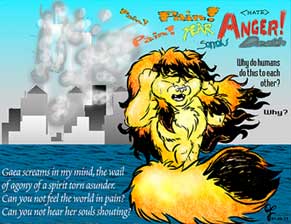 The heroic legions of ambulances, fire trucks, and police cars that rushed to the scene only to be buried in debris and crushed. I'd eat off of that in a snap. Extra bonus points awarded if the plate also shows some dead or disfigured bodies inside of the ruined vehicles.

A collage of pictures showing people jumping out of the windows of the WTC to their deaths as it burned. The kids will love it! Makes a great Christmas gift!

A picture of the herds of people trying in vain to run away from the cloud of dust and shrapnel that raced throught the streets of New York at 80 miles per hour.

The plates depict a picture of the burning towers but arrive broken into tiny, sharp pieces that you have to glue back together yourself. Fun for the whole family!

Another popular product seems to be stickers and posters and shirts with pictures of the World Trade center and either the phrase "Always Remember" or "Never Forget." The only problem with this is that I am not sure which one of these things I am supposed to do. It is not mere semantics to say that these phrases mean distinctly different things and I would think that in a time of crisis our government would have adopted one national catchphrase to make it easier for us to tow the party line. It's too easy to get them mixed up! I demand a sound byte! GET YOUR SHIT IN GEAR, USA. I PAY MY TAXES TO LIVE HERE SO YOU HAD BETTER SHAPE UP OR SHIP OUT.

There are many products that they have yet to offer from the WTC thingy, but I'm sure that if they marketed this stuff on TV, those profit-minded folks would clear up: 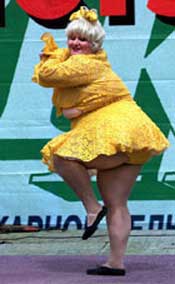 They could have a game show akin to the 80's Double Dare only with a name like Defend the Towers in which you have to answer questions about preventing the terror before it starts. The physical challenge section of the show would involve stopping a 747 with various parts of your body.

You should be able to buy a vial of bone and ash from the towers themselves. This is an heirloom that would be treasured for generations, and for the low, low price of $300 plus $25.95 shipping and handling it can be yours.

WTC-flavored cola! Now in Diet and with half the calories of other colas (may contain some carcinogens and human bone).

The all new VW WTC Turbo edition would be equipped with the latest luxury conveniences including flame-retardant upholstery and escape ladder. Extra-large gas tank and model American Airlines planes included for the kids!

747-proofing kits are a must for any terrorist-safe home. These easy-to-assemble products lead you step by step through the important tast of making your house, pets, and children safe from planes by erecting a 30-foot thick lead wall around them.

I suppose that only time will tell whether these amazing products will be created, but in the meantime there are plenty of crappy USA-emblazoned things to waste money on. I am sure that the people selling the cheaply-made patriotic garbage are only doing so because they want to help support the families and victims of September 11th, but gosh, it just doesn't really come off that way for some reason. I suppose that there's nothing anyone can really do about it seeing as Mrs. Joe Housewife just has to buy those red, white, and blue lawn flamingoes, but that's nothing a little fire won't cure. Until then, I am working on my own personal line of WTC feminine products that should be on sale by fall.