Games Workshop is looking for samples from aspiring Warhammer authors. My biggest dream in life is to have a book published so I put together this 500-word submission, which takes place in the Age of Sigmar fantasy setting. Fingers crossed!

Prombles, the realm's greatest goblin detective, perched atop a pile of dwarf and greenskin corpses in the center of a battlefield. He tapped his pointy chin while considering the scene below.

An orc brute lay dead in the mud. The enormous creature's bright yellow armor was split open from its left shoulder to the opposite waist, the ragged gash revealing a lumpy bouquet of foul organs.

"Snivol, my dear fellow, if you are quite finished tapin' off the scene I should like my lookin' glarse." 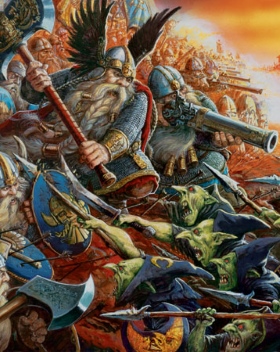 The detective's assistant whimpered, cowering at the cacophonous pitched battle surrounding them. Snivol obediently began to rummage through a sack that had once been burlap but was now entirely made of random fabric scraps loosely held together by rough stitching. His fingers brushed against something promising. A mushroom. No. Prombles' battered copy The Complete Cases of Sigmarlock 'Olmes, scavenged during a raid on a human town. No. Ah, there!

Snivol triumphantly held the lookin' glarse above his misshapen head like a glorious hero raising a standard. It was a simple chunk of elven stained glass, not shaped to magnify anything seen through it in the slightest, but merely colored red.

Prombles leapt down in a surprisingly graceful bound and plucked the lookin' glarse from his assistant's gnarled hand with a nod of thanks. The detective held the glass to his eye, squinting at the dead orc up close.

"Here, on the subject's boots, we 'ave clue number one. This peculiar reddish soil. So very distinct. Probably only found in one small place on the whole realm. Fascinatin'. Quite fascinatin'."

The decapitated head of a dwarf cannoneer sailed overhead. Snivol flinched, the mass of gnarled teeth in his underbite chattering and clacking.

"Clue the second," declared Prombles. "The distance between the subject's open hand and his fallen choppa blade. A distance that could be measured, if I'm not mistaken. Rather convenient, wouldn't you say?"

Snivol nodded helpfully. He had no idea what he was agreeing with. After a few moments his head movements transitioned to widening loops as he watched a worryingly close dwarven gyrocopter spin out of control, its hellfire cannon raining hot death upon hundreds of friends and foes alike before the flying machine careened into a goblin catapult.

"Aha," said Prombles with a flourishy hand movement. "Here we have clue number three, slight discoloration under the subject's fingernail."

The detective's last few words were difficult to hear over the screams and grunts of battle as pressed hordes of greenskins and dwarfs fought and died just outside the marked-off investigation scene, courteously avoiding the tape with their swinging blades.

Prombles returned the lookin' glarse to his assistant, a twinkle in his eye as he rubbed his hands together.

"Unless I am very mistaken, this orc's passin' was not the result of natural causes," the realm's greatest goblin detective said with obvious delight as an orc behind him exploded in a shower of gore. "I suspect... death by violence. We have ourselfs a case!"