Bad films are our bread and butter here in the Current Releases office, and this is no lean week for such fare, with The Chronicles of Narnia: The Voyage of the Dawn Treader and The Tourist failing to excite us in any way.

The Chronicles of Narnia: The Voyage of the Long Title

EXPECTATIONS: Hot on the heels of the hugely successful (and frankly brilliant) Lord of the Rings movies came a very lacklustre attempt at giving "The Chronicles of Narnia" the same treatment. Their approach? Employ the exact same aesthetic style, right down to hiring the same effects team, and just hope it ends up as good. The result? Dull, lifeless, badly acted melodrama. And now they're up to the third film!

REALITY: As a film critic, and a general audience member, I feel there are certain things I should be able to expect when watching big-budget fare like The Chronicles of Narnia: The Voyage of the Dawn Treader, all of which can be narrowed down to the simple phrase "technical competence." This film fails on a professional level. Bad acting and lifeless writing set this on the scale of a children's nativity play. Sure, it's adorable when it's your own kids up there, but none of that applause is born from sincere admiration. Now imagine that your kids' terrible performance was put on the big screen, and that the only audience members were complete strangers who were paying to be there. 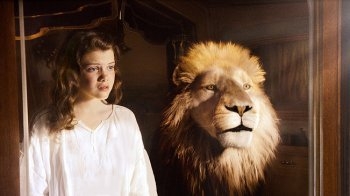 Oh my God! Run! There's a lion in the room!Picking up from last time, we are re-introduced to Edmund (Skandar Keynes) and Lucy (Georgie Henley). Now forced to live with their insufferable cousin Eustace (Will Poulter), they still dream of their time spent in the mystical land of Narnia, where they are apparently royalty even though they don't do anything when they're there (and they are usually absent anyway). Luckily for them, they are whisked back to Magical Dream Land about two minutes into the film and brought on board the titular Dawn Treader (it's a ship) by King Caspian (Ben Barnes). From this all-too-easy set up stems the very light plot of the film: The Dawn Treader is heading east and there are adventures to be had on the way. It could have been a fun idea, a seafaring fantasy about the collision of British imperialism and a multicultural society exploring the world for its own good, but it never really goes anywhere, and the adventure that is given prime focus seems to have ended before you even realise it's begun.

You see, the young protagonists must find the seven lords of Narnia in order to find the seven swords of Narnia and place them on a lion's dining table so that some evil myst monster will disperse and stop inexplicably consuming people. So they go to some islands and find the lords about 5 yards from the coast and then stumble upon the table and then fight a monster and then go to heaven and then go home. That last sentence was good, wasn't it? That's how this film presents itself: One long ramble about a sequence of events with no tension, no character and no fun. 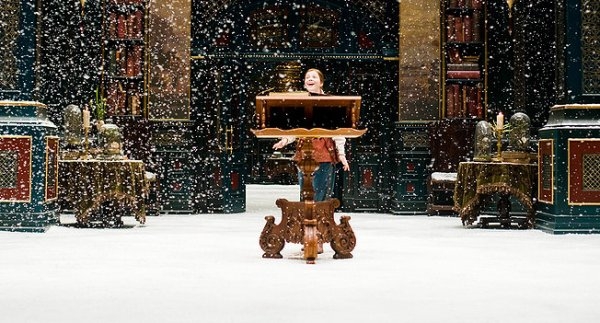 Oh, it's all fun and games now, but you just wait until you're digging your car out at six in the morning and waiting weeks for the bloody post to come.

Remember in the Lord of the Rings films how large amounts of screen time would be dedicated to establishing the chemistry, relationships and camaraderie of the lead characters? There were some very surprising moments of nuance and sincerity in the performances that elevated it above a silly fantasy story and loaded it with humanity. This film doesn't have that. The lead characters are not only given no room to explore their relationships, but also they clearly haven't had any acting lessons between films. Watching them flub lines and attempt to simulate emotions actually starts to get infuriating after a while. If you want to watch incompetent people do their jobs badly, there are restaurants I could recommend. 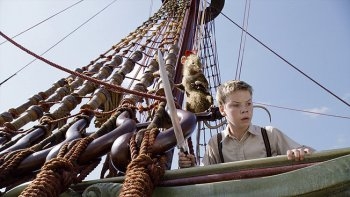 Children With Deadly Weapons: The MovieThere is one member of the cast that performs admirably, and I know you all assume it will be one of the adults, but I'm talking about Will Poulter of Son of Rambow fame. Here in Britain, Poulter has been honing his skills on the television show School of Comedy, so it is no surprise that he displays a knack for comedic line delivery and general acting skill that the rest of the cast seems incapable of matching, or even approaching. However, as good as he is, his character Eustace is handled in a rather unusual way: He starts the film as a comic-relief personification of British hard-headedness, but he's also the narrator for some reason. Anyway, he grows as a character thanks to his relationship with a cartoon mouse voiced by Simon Pegg. Then he turns into a dragon.

Let that hang in the air for a while. The best actor in the film carries out most of his character arc in the guise of a mute CGI dragon being talked at by a CGI mouse. If this film were trying to make a statement on visual effects like Skyline, it would be inspired, but it seems to be pushing the equality message, which just makes it a little odd. It's like having him turn black so that he can understand the multicultural nature of the world. Oh! Black people/dragons have feelings too! I know, because I was one and had feelings during that time!

At an appropriate point in the film, Jesus Lion turns Eustace back into a boy, and suddenly he is on the other side of a character arc that the actor never got to convey. It makes it hard to reconnect with the character in the latter part of the film, so he just blends in with everyone else we don't care about at that point.

The film "climaxes" on the shores of Aslan's country, because that is apparently where the Dawn Treader was going the whole time. Why they were heading there is beyond me, because they don't actually do anything of interest once they arrive. Liam Neeson shows up for half a day in the recording booth to reprise his role of Aslan, who explains to the interchangable children that he is known by another name in our world and that we should all get to know him by this name in order to get into heaven. I don't mind a specific religious message in a film, but you really have to earn this stuff. Considering that the previous twenty minutes were pretty much a live action re-enactment of fighting the first boss from God of War, I'd say you definitely did not earn it on this occasion.