The Week In Gaming

It's been an incredibly exciting week in the world of video games, and as a result things are totally crazy down here in the Video Game Overwatch Center! There's all sorts of beeps and boops coming from one computer, someone just walked by at a brisk pace, and my heart keeps beating faster when that pretty girl talks to me! We'd better delve right into the top stories before someone breaks into a jog and hurts themselves. 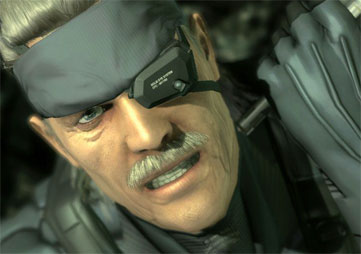 If loving you and your goofy mustache is wrong, then baby I don't want to be stabbed in the neck with a mysterious syringe.Playstation 3
At the Tokyo Game Show, a scene from the next-gen Metal Gear Solid game was shown to the stunned and possibly asian audience. The purportedly real-time demonstration was so beautiful that a long running debate as to whether or not the sight of an old man in a latex suit could give me an erection was definitively settled.

Xbox 360
Microsoft officially announced the U.S. launch date of their highly anticipated system as November 22nd. They also announced that on January 22nd they will realize the "budget gamer" demographic they were going after with the cheaper non-hard drive version of the console will simply wait for the first price drop and buy the deluxe edition once the game library has filled out.

While the decision to release dueling Xbox 360s is planned to be a failure in many fascinating ways, the majority of the cheaper systems will be bought by well-meaning but hapless parents on tight budgets. A fair amount of these parents will, of course, be forced to head back out to the store and shell out an extra $40 for a memory card which they had assumed they wouldn't need since the last Xbox didn't require one, at which point Microsoft plans to have two specially trained employees high-five each other excitedly.

Silver lining, people. One in every cloud.

Nintendo Revolution
When Nintendo unveiled its bold and bizarre new controller to the world this week, they invited the press to get some hands-on experience with a few tech demos which utilized the motion-sensing capabilities of the device. These demos included a fishing simulator that allowed you to tug fish when they bit on your line, a flight simulator in which you tilted the controller to turn the plane and make it dive and pull up, and a puzzle game where you struggled to pan the game's camera around the gigantic set of balls Nintendo apparently possesses.

Indigo Prophecy
This multi-pathed "savior of the adventure genre" is such an innovative stroke of genius that it's hard to believe no one ever thought to create some form of fiction where you could choose your own path before! With a myriad of possible endings, which one is your favorite? Mine's the one where I realize there's no compelling reason to actually start again after the first 4 hour playthrough, press the eject button and put in a game that's actually fun. 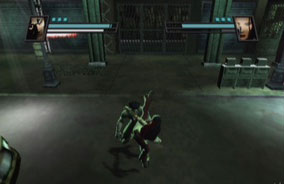 Darkness Goblin versus... Indistinguishable Rubber Blob Man? You make the call! Or don't, it's probably best not to think about it.Marvel Nemesis
We've got the Marvel license, holy shit! Let's make an awesome fighting game utilizing the tremendous range of characters available to us with several generations of backstory built in! Thanatos versus Aunt May! Spider-Man in the black costume versus Aunt May! Ghost Rider versus his motorcycle!

No, wait, even better! Let's just use a tiny selection of Marvel characters we've seen a thousand times before and have them face off against a handful of opponents we'll pull out of our asses that absolutely no one will care about! Also, instead of the good gameplay let's go with bad gameplay and shallow graphics that make the Tom Sizemore sex tape seem like a comparative feast for the eyes.

We Love Katamari
Oh no, a game that's every bit as fun as its predecessor but doesn't add rpg elements or the mishmosh of stupid features that the pretentious reviewers are fixated on this month? Better give it a worse rating than the original!

World Of Warcraft
Ryan Grover from Cleveland, Ohio played a moderate amount of World Of Warcraft this week. The 26 year old who moved out of his parents' house at the age of 18 and has a steady job reportedly logged on when he was bored, played for no more than four hours in a single sitting, and was able to exit the game at a reasonable hour without incident.

His girlfriend, an actual real person with whom he enjoys a happy relationship and healthy love life, was actually surprised to hear the news.

"World of what?" replied Kimmy Banks with a puzzled smile when we asked her for details. "I guess that's one of his computer games? He doesn't really talk about them much, they're not a big issue. No, he never bores me with the minutiae of how he obtained every rare item on his character or anything like that."

As of the filing of this report, Ryan has not been part of any interesting tales involving the need to defecate without leaving the computer. His guild is considering the proper course of action to take, and concedes that expulsion is not out of the question.

Competitive Gaming
Once the darling of the gaming community but now completely forgotten, competitive FPS gamer Dennis "Thresh" Fong woke up with a tear already in his eye, dashing his dreams of just a few waking moments devoid of sadness.

He had once been loved, admired, even feared. Now he was just a washed up nobody who had been sleeping in his car for the last month. As his gorgeous wife called him in to have breakfast in their million dollar home, he dangled his feet out of the back window of the Ferrari he had won from John Carmack all those years ago and considered the cruel nature of fate. One moment he had basked in the glory of playing video games against sweaty nerds, the next he was simply rich and purposeless.