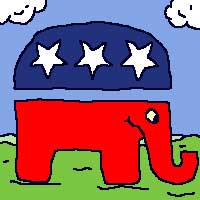 Judgment Day for the Republicans. I'm here right now on the blogosphere monitoring events in the 2006 election. This is a critical year for the Democrats, because Republicans have spent the last few years making everything that could possibly go wrong go wrong in the worst possible way. Democrats, in their infinite wisdom, chose to use this time to further their image as the uninteresting and boring party that exists solely to not be Republicans, even though they are roughly the same thing.

As I write this the election is still unfolding. I did not intend to write about politics, but I am in the unenviable position of having to be funny at a time when the cogs of democracy are turning, grinding people like you and me to dust. The only thing I can really write about now is that which I am focused solely on: America's political popularity contest. I am joined in the blogosphere by my rival blogger Tom "Moof" Davies of the Moof Report. We are casting aside our overwhelming hatred for one another to focus on giving you coverage of this election in real time, only you won't read it until it is done, probably invalidating all of our insights and discussions. I assure you, however, this was all written in real time, just in your past.

I should note that Moof is not an American. He is English. He speaks with an English accent. He eats things like crumpets and Cornish pasties and rides on trams. He is everything that we are not: UN-AMERICAN. To give you an example of where Moof stands on democracy, here is his sinister take on it:

Moof: The main problem with democracy is that the people cannot be trusted with the power.
Moof: The majority does not really know what is best for the majority.
Moof: I propose a system of pulleys and levers.

Nonetheless, Moof has a keen understanding of the political process, offering important insights as an uninvited outsider.

Moof: Livestock, watching elections is like watching sports but more people lose their jobs. :)
Livestock: That is ironic because many politicians run on a platform of creating jobs, when in fact they are doing so to steal a job.
Moof: Yes...
Moof: They are.
Livestock: That is hypocritical and I would never vote for a hypocrite, even if it means remaining jobless.
Moof: Democracy is a lot like American Idol.
Moof: I wonder if that is where they got the idea for democracy?
Moof: Probably.
Livestock: At the end of each election there should be someone that makes fun of the winning and losing candidates.
Livestock: And teenage girls should be able to text in votes.
Moof: Yes.
Moof: Man, the Dems just picked up another house seat from the GOP.
Livestock: Which seat?
Livestock: I hope it was a recliner.
Moof: No, it was a hammock, but it is still nice.

House of the Dems

The biggest victory for the Democrats came in the form of the House of Representatives. Throughout the night the Republicans consistently lost ground there, giving some hope for a return of checks and balances which are nice since our government is completely insane.

Moof: According to CNN Arizona 05 and Arizona 08 are key races.
Livestock: Races to the bathroom so you don't miss the actual important stuff you mean!!
Moof: No, they are very important.
Moof: Democrats are +2 houses so far.
Moof: If they get 4 houses then can swap it for a hotel. :)

Inevitably the Democrats gained many hotels worth of power, and easily secured control of the beloved House of Representatives early in the night. As such we didn't spend a lot of time blogging about the House, because nobody even cares about the House. There are over 400 House members, so it's not like it takes effort to get there.

The Issues at Stake

Politicians weren't the only things on the ballot. A wealth of important issues were on the table, including bans on gay marriage, abortion, stem cell research, and public hooting.

One of the key issues being decided on this election year is that of mine safety. With several mine inspector seats up for grabs, the future of mines proved to be up in the air rather than in the ground.

Reports from the Political Jungle

Livestock: Moof, reports from Animal Planet are projecting spiders the winner.
Moof: I am calling the jungle right now for lions...
Moof: As king.
Livestock: Moof, that doesn't even make sense. This is a democracy!
Moof: Not in the jungle.
Moof: Livestock, exit polls at the zoo are suggesting an overwhelming victory for giraffes,
Moof: But we all know how misleading exit polls can be since the 2004 penguin-polar bear upset.
Livestock: Tom, I am well aware of this. I saw the giraffes and they have put on a good show for people lately, picking up a lot of ground in the hard to reach branches area. But we cannot rule out hippos this time, not yet.

Livestock: Moof, I am still real time blogging and I'm going to go ahead and call tunnels for horses, with 57% of tunnels reporting.
Moof: We haven't heard from golf cart tunnel yet so I am not going to call it either way.

Moof: People at work are talking about Photoshop Phriday.
Livestock: What are they saying? Can you poll them?
Moof: I am calling it for FARK.
Livestock: Oh no. :(

Battle for the Senate

The main focus of the night was the fight to control the Senate, and dominated the bulk of our discussion.

Livestock: Moof, who are your top three dream senators?
Moof: Ted Kennedy
Moof: Winston Churchill
Moof: He-man
Livestock: Do you want to know mine?
Moof: Yes.
Moof: Please.
Livestock: Aulus Caecina
Livestock: Decimus Junius Brutus Albinus
Livestock: Marcus Scribonius Drusus Libo
Moof: Those are Roman senators.
Livestock: I didn't specify what kind of senators.
Livestock: I could have said Senator Palpatine, but frankly his reforms were terrible.
Moof: Okay, I am sorry.
Livestock: Moof, the question on most American minds is thus: could Hillary Clinton win against a barn full of hogs?? The answer is no, and I am calling NY for a barn full of hogs with 75% of precincts reporting.
Moof: The hogs are men.
Moof: Men always win against women.

Although my projection was a bit off, we eventually got back on track.

Moof: Livestock, it is going to be difficult for the Dems to win the senate.
Moof: They need 3 out of the remaining 6 seats.
Moof: Three of them have a strong GOP lead.
Moof: One of them has a good Dem lead.
Moof: And two have a small GOP lead by maybe 2%.
Moof: So the Dems need to take those two.
Livestock: I have a theory, Moof.
Livestock: How the democrats can pick up some senate seats.
Moof: Ok, how? (They cannot just buy some seats or steal some seats).
Livestock: Oh, well, never mind.
Moof: Sorry.
Livestock: Wait, I have another theory.
Moof: Okay (they cannot make seats out of lumber).
Livestock: The Dems in the house could use their newfound advantage to create several new states and fill them full of liberals, creating new senate seats that will go to liberals.
Moof: What would the states be called?
Livestock: The states would be called Pago and Bayonet.
Livestock: Pago being the better of the two, obviously.
Moof: Livestock, CNN just called New Caprica for Baltar :O

As the night dragged on, the contest for the Senate ended up resting on two states, Virginia and Montana. The wonders of democracy left the fate of the government in the hands of two boring states that no one actually cares about.

It is looking like the Democrats have a chance to pick up the last remaining seats and take control, but that is not certain as of this writing.

The Saga of Lugo

The most interesting story of the election was without a doubt that of Chris Lugo's candidacy in Tennessee. Lugo ran on the platform of "I am a grown man and I have a neckbeard" and lost with less than 3,000 votes. Still, his startling campaign and his neckbeard made him the standout candidate in a hotly contested race. 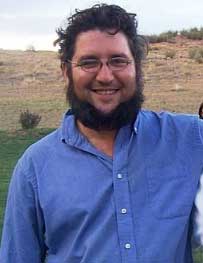 VOTE NECKBEARD Moof: I am sad to see Lugo only got 2000 or so votes in Tennessee.
Livestock: Lugo had a lot to offer.
Moof: He will get his chance to shine.
Livestock: Lugo for president??
Moof: One day...
Moof: He got 15 votes in Bedford County. :)
Livestock: A key battleground county...
Moof: He got 1 vote in Clay County.
Moof: Livestock, I am about to call the Senate for Lugo.
Livestock: That is a bold move, Moof. I hope you don't have to eat crow, as we say in political circles.
Moof: PICTURE OF LUGO FOUND!
Moof: I think he might have stairs... if you know what I mean... (In his house)...
Livestock: Lugo has a neckbeard!
Moof: Do you think maybe... he is protected... from pusher robots...?
Livestock: I don't think we should talk about this anymore
Moof: Oh, Lugo! :)

I am certain that that by the time I wake up in the morning, Tennessee will have already finished its recount and declared Lugo the true winner. It also very much looks like the Democrats will snag Virginia and Montana. It is always possible something will change, but it is looking pretty certain that the Democrats have reclaimed the House and the Senate, vanquishing evil and making the universe safe again.

I apologize for the disjointed nature of this update; it was pieced together from a dramatic night of discussion and ever shifting news and poll data. I trust that it will all be overturned hours after I post this, making me look like the biggest idiot in the world. I am going to go ahead and wrap things up and say that this night seems to have been a step in the right direction.