Greetings. You may not have ever met me before but I can assure you that you know me. You probably aren't able to spot my face in a crowd of people, but be assured that you know who I am. You don't know the sound of my voice, you cannot determine the color of my hair, and you will never guess my race or gender... yet you know me.

You see, I am "that one guy." I've been known as "the bastard way over there." I have been called "whoever that shithead is up in front." You know me, yet you've never met me personally. Let me take a moment to describe myself. 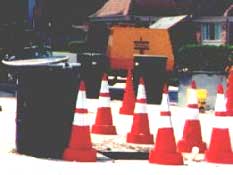 One of my favorite sights.

I am the person who, during rush hour traffic, decides to stop and stare at the abandoned sweatsock alongside the highway, thereby causing everybody else behind me to slow down and create a traffic jam which makes you an hour late getting to work. I am the guy in your office who has the same tastes as you and eats all your favorite food products from the vending machine before you have a chance to purchase any, causing you to settle for a bland Payday candy bar. I am the guy in charge of programming the LCD and change-dispensing unit on those vending machines to insure you never get the correct change. Ever. I am the person on your cable modem branch who saps all the bandwidth from everybody else by constantly downloading high-resolution episodes of "Small Wonder" 24 hours a day. I am the guy who goes into your campus computer labs and clogs up all the computer peripherals with wads of dark brown gunk that come from another dimension. I'm the jerk in your office who constantly hums the theme song from "Jeopardy!," forcing you to lose your concentration and have the song stuck in your head until the day you die. I'm the person who accidentally dials the wrong number and calls your house, then continues to do it two more times since it takes a lot to convince me that I'm really the one at fault in this situation. You might know me as the guy whose cellphone plays "La Cucaracha" during the middle of a movie in a large cinema. Somehow, and in some way, I am additionally the man who is also calling my phone during that movie. I'm the movie producer who gave the green light to "American Psycho 2."

I am responsible for forwarding those sentimental Jesus-centric emails to approximately 50,000 random people on a mailing list, then replying to each and every one of them with single-sentence quotes such as "LOL" or ":-P." I am the person on every forum who claims to know a lot about guns and never stops writing about them, yet I routinely make mistakes such as claiming a 9mm pistol uses .45 caliber bullets. You might know me as the man who posts pro-Star Trek messages on the Star Wars forums and vice versa. I let X-Box fans know that I like the Playstation 2, I let Playstation 2 fans know I prefer the Gamecube, and I let Gamecube fans know I'm heterosexual. If I ever get an email or Instant Message demanding I forward it to 10 other people or else I will have remarkably bad luck, I make sure to forward it to at least 20 people just to be safe. I don't run an anti-virus or spellcheck program, and I don't believe in installing patches or defragmenting my harddrive. I install every Internet program that prompts me to install, I enjoy punching the monkey, and am great friends with Bonzi Buddy. I send emails with attached 800k Photoshop .psd images of my vacation in Des Moines, even though they could easily be converted to 27k .jpg files.

I am the one passenger on the hijacked airplane who voted not to try and overpower the Taliban hijackers during the 9-11-01 attack. I am the guy who knows the person responsible for sending out all the Anthrax-laden mail envelopes, but I'm too lazy to get up and actually phone the FBI with their name. I am the person who came into your office one day wearing a sombrero with flashing Christmas tree lights wrapped around it, thereby causing your boss to implement a strict dress code policy. Speaking of implementing new rules, I am completely responsible for forcing various companies to add seemingly inane warning labels to their products after I misused them in the following unorthodox ways:

See that little guy on the right? That's me.

I took a Q-Tip and kept pushing it into my ear canal until it rammed some soft, squishy substance inside my head, immediately making me dizzy and remember the time back in fifth grade when I took one single piece from every classroom jigsaw puzzle and threw it in the trash.

I used a hairdryer while attempting to take a bath. I figured, "hey, why not dry my hair while enjoying a warm bath?" I also attempted to use it while sleeping; my bed seemed cold at the time.

I was the person who plugged in an iron and tried to iron off my facial wrinkles. It turns out the iron was hot, something the company did not previously warn me about. They also failed to mention anything about how I shouldn't iron my clothes while wearing them.

I am the first person to ever have an accident with a handgun, causing somebody else to mistakenly die. Now, as any of you handgun owners with the brochures from your pistols know, handguns can kill.

I once put an infant inside a dryer because I found him outside my apartment, cold and wet. I figured it would be the smart thing to do.

One time I was crying after watching the season finale of "Ally McBeal" (which I am a Nielsen rating household and support 100%), so I sprayed deodorant in my eyes in order to dry up the tears.

I often assume hot cups of coffee at fast food restaurants are cold. I try to drink them as fast as possible before I determine their temperature.

Since I enjoy the color red, I have spent much time staring into the beam of various red laser pointers which I purchase in bulk.

I thought those little powder packages that come inside new shoes looked really good to eat, so I sprinkled them all over my bagel one morning. It turns out I was wrong.

Once, while driving home, I took some sleeping pills because I was unaware they may cause drowsiness. I was driving heavy machinery at the time.

I used to light firecrackers and let them explode on my hand just to see if it would feel "cool." My mistake; it did not feel cool at all.

I saw some people driving really fast and down mountains and through oceans in a car commercial, so I attempted to emulate them by doing the same. Something unexpected then happened to my automobile, involving it crashing into a stationary object, which I was completely unprepared for. 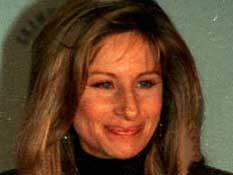 I strongly believe this woman is attractive, talented, and has formed reasonable and intelligent political opinions.

Although my full-time occupation is doing things which cause companies to add more legal disclaimers to their products (for both the safety of you and I), I do have many part-time jobs. I handle all of Rosie O' Donnell's PR work. I am in charge of selecting the largest and loudest speakers for Barbara Streisand concerts. I am the guy who decides when Jessie Jackson or Jimmy Carter should be sent to hostile foreign nations so they may denounce the policies of America and hope to get on the good side of countries who enjoy watching babies explode. I helped the "Dude, You're Getting a Dell" guy rise to fame. I work with the Highway Safety Commission to randomly place orange cones all over certain lanes of the highway for no reason; it doesn't matter if they're working on the road or not, I just put up the cones whenever I feel like it. I help design the 43-ton garbage trucks that thunder down your street at 3:30 am, making enough sound to vibrate the foundation of your home. I brainstorm ideas for national retail chain stores, such as the "Three-Year Service Plan" and the hardball approach every store employee should take when attempting to sell you one. I work for fast food restaurants and help them come up with ideas like abolishing the "small" and "medium" sized drinks, and instead starting with size "large" and going up to "super-super-super-jumbo-mega-quadruple-size." I have designed each and every outfit for Elton John. I developed the popup ad. I created the popup ad with sound. I thought of the popup ad with sound and Flash and no way to close it except physically turning off your computer and manually replacing the motherboard. I start up telemarketing companies and make sure that all calls are made during dinnertime, selling products that nobody anywhere could ever be interested in. I am in the record industry and choose which bubblegum teenage pop tune should be played on every radio station every other song. I was the guy in the Jar Jar Binks costume. I am the lawyer who tries to sue entire state governments when somebody either dies from chain smoking or being shot by a criminal's gun. I am the lead security developer for Outlook Express.

In short, you have never met me before, but you know me. Our relationship will stay this way until the day you die. I can simply hope to speed up that process while remaining the enigma I am.

You Will Watch the Picture-Tube and Consume, Human!

Emily "Integral" Reigel has once again stepped up to the plate and reviewed another horrid piece of gutter trash from the past, the remarkably appalling film "MAC And Me." Here's a little scoop to get you interested. Well, actually, scratch that part out. There is positively NOTHING that could get ANYBODY interested in ANY facet of this film.

Then, something terrible and unforeseen happens that changes the course of events for eons to come. The McDonald's corporation, along with elite friends such as Valvoline, Skittles, Sears, and Coca-Cola, decide to create a movie. A movie worse than any movie ever seen or imagined before. A movie so bad that the only words that can be used to describe it are not words at all, but more like a series of grunts and yelps, such as, "Aaaauuugghiighhh. Grruuuuhhp. Bbbuuuhhhhoohhhh. Eeep!" Even then, the sheer visceral horror that this movie elicits is hard to communicate, but an attempt will have to be made, just as an attempt was made on the life of my poor, dear grandfather one night last fall as he made his solitary way home from the local Elk's Club after a high-stakes game of spin-the-bottle. I miss you, Gramps.

Yup, that's right, this entire film was sponsored by such corporate giant whores as McDonalds, Coca-Cola, Valvoline, and Sears. Unlike other movies, where product placement takes a back seat to the movie itself, these companies have shrewdly elected to have the entire film revolve around their products. Wow! Way to go! This is the kind of revolutionary thinking that made this country what it is today, whatever the hell that may be. Go ahead and choke in disgust at the pile of corporate filth that is "MAC And Me." Ugh.