Apparently Emily "Integral" Reigel either didn't feel like updating today or she died. Some of us apparently have great communication skills here at Something Awful! Sorry for the inconvenience, folks!

More Og For Ya!

Like clockwork, the boys down at State Og have their weekend update fresh and ready to go!

The big problem was that unlike other enemies of the state like the undead and those bloodthirsty moon men, it can be very hard to differentiate between a drooling, filthy communist and the rest of the drooling, filthy population. That's why State Og put someone's nose to the grindstone and its shoulder to the wheel and came up with a brilliant idea: a hat that screams as though in excruciating pain whenever a Communist or bumblebee was within fifteen feet. 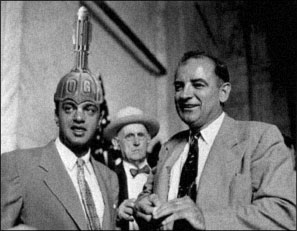 In a whir of effort that showcases the immense power of predatory greed, the boys in the lab slapped together a few prototypes and delivered them posthaste to the valiant men who held vigil against the ravening communist hordes. Its initial use revealed a thousand times more communists than previously expected. Further use revealed that it didn't really work at all, but not in time to save loving grandmother Ada Schlitz, who was put to death in the electric chair in August 1953, eliciting a torrent of protest from her twenty-seven cats. While also linked to an epidemic of one-eyed flipper babies, no conclusive proof was ever brought to authorities before we had a chance to bribe them.