Get To Know Your Professional Wrestling Match Types

It's safe to assume that everyone would like to keep up with professional wrestling at all times. Unfortunately, that can be quite difficult. Every week there are dozens of storyline developments, titles changing hands, and Matt/Jeff Hardy arrests. Staying on top of all that while paying attention to the rules of each match type can be overwhelming. Why not familiarize yourself with those rules now so you can focus on the important stuff?

The most common match type. The first wrestler to fall down is the victor. Opponents grapple, maneuver, and brawl in an attempt to keep each other too busy to throw themselves on the mat unimpeded.

One team of wrestlers huddles in the center of the ring, closing their eyes and counting to one hundred. As they do this, the other team frantically searches for hiding spots somewhere within the arena; behind fan signs, inside trash cans, in the shadows of wrestlers with names that include the word "Big" or "Giant". The match ends when both members of the searching team locate and tag both of their opponents at once, or when the hiding team hits the searching team with a limo in the parking lot. 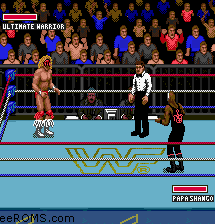 One man locks the other in a painful-looking hold, then the two stay in that exact position for 3+ minutes as the broadcast cuts to commercial. When the television audience comes back, the two men politely trade places, settling in for another hold as a new commercial break begins. This match continues until the crowd submits.

Both wrestlers lock eyes with random members of the audience. The first one to blink loses. When one wrestler racks up 300 losses his opponent is declared the winner of the match.

One wary wrestler must face the thirteen deadliest forms of Nicolas Cage. A test of physical prowess as well as microphone skills, this is a potential champion's biggest challenge in the main event at Wrestlemania. The match usually starts with Cage's Moonstruck incarnation. When defeated, Cage then morphs into his Raising Arizona form as dramatic Final Fantasy boss music plays. His thirteenth form, which always catches his opponent off guard, is Ben Sanderson from Leaving Las Vegas.

If both men are able to identify the table, ladder, and chair, the match moves on to round two. The three items are shuffled around as both wrestlers put on blindfolds, staying in the ring. They must now identify the items by touch.

A charismatic wrestler such as CM Punk speaks into a microphone backstage. In the ring, peanut butter is spread in a labrador retriever's mouth. As the dog opens and closes his mouth to clean the peanut butter away, it looks as though he is speaking when it is in fact the wrestler. Everyone is declared a winner.

Two opponents have a lengthy back-and-forth arm wrestling match involving a lot of grimacing, shaking, and intimidation. The winner becomes the legal guardian of the actor that played Sylvester Stallone's kid in Over The Top. He's in his 40s now, but his contract for that movie was really weird, so any arm wrestling match with him at stake is legally binding.

A wrestler explains basic concepts that aren't taught in school, but that everyone should know when they enter the real world. How to balance a checkbook. Keeping up with bills. Buying a fancy pair of dress pants that you only wear while handling large quantities of ham, so you have something to wipe your hands on.