Americans approach discussions of race with all the enthusiasm and unguarded honesty teenagers bring to parental talks about ejaculation. In other words, we hate talking about race, especially in mixed company. We share the certainty that no matter what we might say, someone out there is cringing at what we are saying. Confronted with tapes of his Reverend Jeremiah Wright saying things that sounded to white people like evilness, Barack Obama boldly shoved 250 years of racial resentment to the center of public discourse. Meanwhile, America's nemesis overseas, Osama Bin Laden, released his most annoying and petulant manifesto yet, attacking two pillars of modern Western society: the Pope and the editorial cartoonist. Finally, a new addition to Profiles in Scourging we like to call J'accuse! where we point the finger at the most under-castigated shithead in recent days. 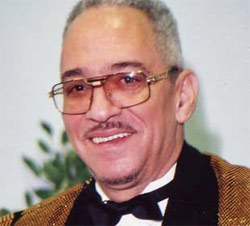 Don't be fooled by the smile, he's EVIL!!! The Democratic primary campaign had, until the last week, become a tedious seesaw back and forth between the two leading candidates. On one side, Illinois Senator Barack Obama was winning in pledged delegates, states won, and the popular vote. On the other side, New York Senator and former First Lady Hillary Clinton had managed to convince the media that not being able to win was completely different than losing. The proverbial stalemate of the unstoppable force and the immovable object was the narrative set to carry Democrats to a bloodbath of a convention in Denver that would make Chicago in 68 look like a Lollipop Guild convention.

Then, a break! In a journalistic coup sure to earn someone at Fox News a Polk, the network searched high and low into Barack Obama's past to dig up some dirt. Finding nothing, the network instead turned to Obama's church and bought DVDs of Reverend Jeremiah Wright's sermons from Trinity United Church of Christ's website. They edited out the boring stuff about praising god, coming together, loving thy brother, and all that other religious pap that is a total snooze fest. That left them with about five minutes of footage collected from several sermons, but man, what a five minute clip collection.

Within that montage Wright basically hits all of the bullet points you would expect to be covered by someone running for anti-president of the United States. He damns America for killing innocent people, he refers to the United States as the KKKA, he questions the validity of some of our foreign wars, he equates dropping the atomic bombs on Japan to 9/11, he suggests our foreign policy might have contributed to terrorist attacks on our shores, and he raises the specter of Tuskegee by suggesting HIV was invented by the government to kill black men.

Suddenly, the fragile electorate's applecart had been overturned. God Damn America? B-but that is supposed to be God Bless America! Fox ran the clips of Wright excoriating the US Government and spinning dumb conspiracy theories on a nearly 24-hour loop. The video was understandably upsetting to an audience used to equating the lack of a flag lapel pin with treason and the likes of Sean Hannity lapped greedily from the trough of slop offered by Wright's hacked together hate sermon. After more than a year of Obama famine, it was a right wing feast.


"If [Obama] agreed with Wright, and I don't know that he does, but if he did, that would mean a racist and an anti-Semite would be the President of the United States."

After about 24 hours of being gobbled up by Fox, CNN and MSNBC could no longer pretend to have journalistic integrity in the face of Fox's surging ratings. They began to run the Jeremiah Wright clips, purloined from Fox via Youtube, and sell the story filtered through a lens of panelists and pundits every bit the intellectual equals of towering figures like Sean Hannity.

Reverend Wright, former US Marine and former respected theologian, saw his reputation shredded on TV 24 hours a day. Semper Fi! Placing his friend's political career before his own reputation, Wright allowed the Obama campaign to exile him to some faraway land (literally) while Obama and his team grappled with the fallout. And fallout there was, Obama's poll numbers dropped as if he had just been caught with a bed full of preteen boys and even the Clinton campaign reacted with a mixture of quiet glee and apprehension. They hoped to let the fires of Wright's sermons consume their rival and his tenacious leads. 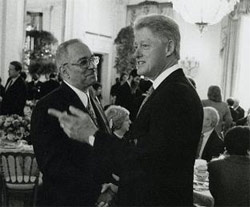 Who let that maniac into the White House? Not to mention Reverend Wright! *rimshot*For Obama, it was a test. America's favorite black man since the Fresh Prince had finally been caught up in a scandal that couldn't be easily brushed aside. The Obama campaign reacted initially with woeful message control, sending surrogates out to say everything from "we've already dealt with this" to "Obama had no idea". Most of them were telling different parts of the truth, but it demonstrated the real frustration emanating from a campaign that felt the scandal was conjured up like a genie from Murdoch's magic lamp. As Hannity himself brags, he's been covering Wright for months trying to turn him into a scandal. It wasn't until the greatest hits reel was put together that anyone actually gave a shit about what Obama's pastor said six years ago.

Obama had two options: wage a protracted and difficult campaign to push back against the Wright character assassination or turn away and let the wolves chew Wright into bloody hunks of gristle. Obama chose option three, he gave a speech. Obama? A speech? Who could have seen that one coming!?

Characterized as do-or-die for the Obama campaign by pundits, Obama's camp spun a romantic tale of Obama staying up "really late" to write his big important speech. His brow could almost be heard furrowing thoughtfully like a governor weighing a last minute pardon. The media wondered: can he pull it off? Will it be enough? The answer, obvious before the question was asked, was "yes and no".

Obama gave a good speech. It's his claim to fame, so that fact alone should surprise and excite about as much as hearing John McCain just scowled at a child. Barring some teleprompter failure, a seizure, or a bat loose in the auditorium his speech was going to be great. He challenged Americans to think about race in new and exciting ways, to look at their own views of race and try to understand the views of others. Asking working class white people to think about race from a black perspective is a bit like asking a baby to solve algebra equations, but he earned points for giving the baby a chance to try.

The liberal punditry fawned over his speech, desperately trying to live history and comparing his speech to Abraham Lincoln or MLK. By the way, they're going to run out of those American history comparisons eventually with Obama and have to delve into ancient history or the Bible. I can almost hear Chris Matthews drooling about Obama's speech being like Moses at Mount Sinnai.

The conservative punditry puked blood and bile. Charles Krauthammer, who once disrupted his synagogue by screaming at the rabbi for not taking a hard enough line on Palestine-Israel relations, described Obama's refusal to disown Wright entirely in his speech as "an elegantly crafted, brilliantly sophistic justification of [Obama's] scandalous dereliction." I guess Krauthammer owns a copy of the Giant Dickhead's Thesaurus. The centrist punditry, the most loathsome of all species of pundits, heaped adulation on the speech and then continued with "but, he still has more to answer for..."

The Wright saga, of course, is not over. A field that fertile for Fox News will continue to be harvested on into the forseeable future and if it's ratings gold for Fox it will migrate to the other networks. There are the beginnings of a push back from liberal quarters against the attack on Wright. Perhaps realizing, "wait a second, WE damn America too!" the likes of the Washington Post's E.J. Dionne and Eugene Robinson have been writing recent columns sticking up for Wright. Can they pull it off? Will it be enough?