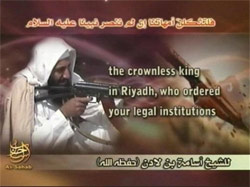 The jihad's graphic design department is really improving. I wonder if they yell "ALLAHU ACKBAR!" while using Quark.There comes a time in every celebrity's career when they need to face their diminishing returns and decide whether to fade into obscurity with a semblance of dignity, or to desperately cling to celebrity through any means necessary. For most celebrities this means showing up on the misleadingly titled Dancing With the Stars or Celebrity Fit Club. For Osama bin Laden, international terrorist celebrity, this means declaring relevance as often and as forcefully as possible.

Bin Laden's Al Qaeda is facing a situation with Iraq's "Al Qaeda" impostor similar to what Gallagher faced when his brother's Gallagher II act became too successful. There is no communication between bin Laden's "true" Al Qaeda and the loose collection of militias and terror groups in Iraq that refer to themselves as "Al Qaeda" basically to sound scary. Unfortunately for bin Laden, these groups are killing a lot more people than the real Al Qaeda has since September 11th.

AHHHHH! This makes me so mad I'm going to blow myself the fuck up!He's becoming irrelevant and the only way he can prop up his importance within the fast paced lifestyle of international terrorism is to rattle his invisible saber via the media. Bin Laden has been releasing audio and video pronouncements to the world roughly every six months. These tapes usually include some of bin Laden's personal gripes with the United States and the West and then some vague threats about attacking.

So what does bin Laden bring us with his March 20th tape? The lamest series of gripes to date, eclipsing even the time he name-dropped Michael Moore in one of his threatening dispatches. The central focus of his March 20th complaints are a comment the Pope made months ago and that stupid cartoon of Mohammad from 2006. For equalities sake, and to prove I take no special pleasure in posting the cartoon of Mohammad, I am including a painting of Gay Jesus and an Arabic cartoon making fun of Jews.

"You went overboard in your unbelief and freed yourselves of the etiquettes of dispute and fighting and went to the extent of publishing these insulting drawings. This is the greater and more serious tragedy, and reckoning for it will be more severe."

The fact that bin Laden forges ahead with this sort of complaining demonstrates just how tone deaf the Al Qaeda message has become. I'm sure a lot of Muslims were justifiably upset over that cartoon and the stupid crap the stupid Pope said, but I'm pretty sure they're not that upset. They're not crash a plane into a building upset or blow themselves up on a bus upset. I hate to break it to you, Bin, but this isn't scary, it's sad.

Speaking of hatred, I have always been disappointed in the ability of a lot of liberals to not hate bin Laden. They get so focused in on Bush and the Republicans and they push bin Laden to the back of their heads. It's understandable to an extent, the right wing has transformed bin Laden from a real evil into a cartoonish villain the likes of Cobra Commander. He's everywhere and all-powerful, lurking behind bushes to getcha with his Islamofascist eye beams! 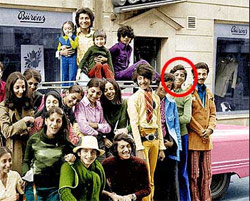 I'm still not convinced this picture of Osama and his family is genuine, but I'm going to use it here anyway because it's the INTERNET so fuck you!By discarding the Fox News version of bin Laden they ignore the real bin Laden: the spoiled rich kid fuck. Liberals hate nothing more than the useless children of rich people, and bin Laden's family is one of the wealthiest in the world. He never had a day of honest work in his life and basked in the luxury of his family's fortune. The rich and powerful running things? Well, I never!

It was all that money and status that allowed bin Laden to go from screwing models on private jets to studying the crackpot chapter of the Koran. He's not even the real leader of Al Qaeda, he's the figurehead with the status and charisma necessary to lead while others do the real intellectual heavy lifting of the organization.

A silver-spoon trust funder used by a shadowy evil cabal to manipulate the population for evilest evil? Come on, liberals, which one of your fantasies does this conform to? That's right, he's just like BUSH=HITLER only his organization literally attacked New York City. He's BUSH=DOUBLEHITLER and like the lame duck Bush he's been reduced to giving almost feeble press conferences trying to get his message out to an increasingly disinterested and cynical world. Unlike Bush, bin Laden's term doesn't end in less than a year, so remember who the real bad guy is moving forward.