Finally, our new segment, J'accuse! where we point our big sweaty Internet nerd finger at the biggest political dipshit to open his or her mouth recently and manage to get away with it. Patrick J. Buchanan, miserable failure of a presidential candidate and crypto-racist paleoconservative has long enjoyed favored pundit status on left-leaning MSNBC. Despite his known background of racism and his frequent and often amusing defense of the Confederacy, Buchanan has managed to skate by on the network with his affable "kooky grandpa" persona. 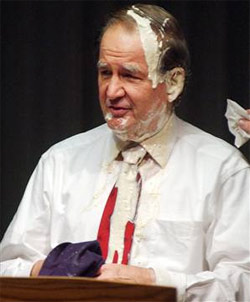 With the flap over Geraldine Ferraro, Buchanan somehow became MSNBC's go-to guy for racial commentary. Buchanan naturally leaped to Ferraro's defense and heaped ridicule on Obama's surrogates...on every show. Producers on MSNBC somehow mistook Buchanan's personal affability for some sort of informed position on race relations and allowed him to spend three minutes every hour for three days talking about reverse-racism and the race card.

Things got a hell of a lot worse when the Wright flap hit. MSNBC conscripted Buchanan as their spokesman on the subject, and Buchanan obviously relished the task, comparing Wright to the Klan and always characterizing what he said as "racist anti-Semitic hate speech".

With the Wright controversy temporarily defused, Buchanan turned to his online outlet at humanevents.com and wrote up what has to be one of the most idiotic editorials ever conceived. The central premise is that the history of slavery and inequality for blacks in America should be forgiven, because blacks here are so much better off than blacks in Africa.

Yes, you read that correctly, Buchanan has admonished blacks for not being grateful enough that their ancestors were enslaved by whites. He suggests a "Silent Majority" believes this and that they demand to have their grievances heard in Barack Obama's conversation about race.

This time, the Silent Majority needs to have its convictions, grievances and demands heard. And among them are these:

First, America has been the best country on earth for black folks. It was here that 600,000 black people, brought from Africa in slave ships, grew into a community of 40 million, were introduced to Christian salvation, and reached the greatest levels of freedom and prosperity blacks have ever known.

J'accuse! Patrick J. Buchanan, you crusty Confederate cannonball, unearthed by MSNBC from some woe-begotten Civil War battlefield and fired hourly into our faces like shrapnel of a past era. Your Silent Majority needs to crawl under the porch like an old dog and die.