The turn of the millennium saw White Wolf's World of Darkness catalog in a tail spin of supplement bloat, obscure product lines (Demon: The Fallen) and dead-end releases themed around the conclusion of the World of Darkness. One of the last and least-desired releases of the original World of Darkness, Mummy: The Resurrection was an attempt to expand the Mummy supplement of 1992 into an entire Storytelling line. You can predict the result: lots of illegible papyrus chapter openers, an elaborate perversion of mythology to serve the mechanics of a role playing game, a nightmare glossary of new words, an attempt to transform mummies into suave, sexual beings and yet another iteration of Vampire's powers and blood system disguised as something else (Hekau and Sekhem). 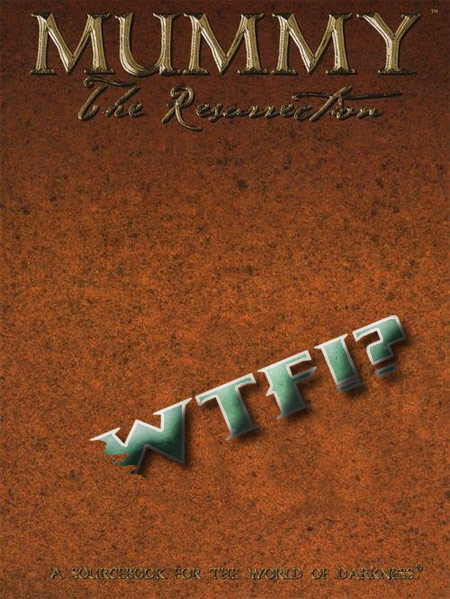 Zack: I have never even heard of or seen this game before today. I have vague memories of the original Mummy book. It was the book my friend who ran Vampire carried around and absolutely never used.

Steve: Jamie had a copy of this but I spilled a can of Big Red on it and we put it in front of a fan to dry out but it got so water damaged and moldy it was like a brittle mushroom. We tried to play one game but it was too gross to turn pages.

Steve: I was going to make a mummy version of Don Johnson's character from Harley Davidson and the Marlboro Man.

Steve: Yeah, but as an ancient immortal who can die and come back to life in his pursuit of ultimate balance.

Steve: We never got anywhere because the part that explained what the heck sekhem meant was glued together with forty other red pages.

Zack: I'm guessing you still played the game more than White Wolf's beta testers who I imagine just sit in a dark room listening to Bauhaus, wearing capes and making kissing sounds at each other.