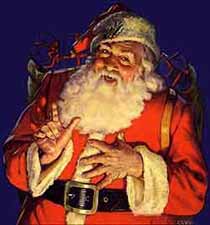 Well, it looks like Christmas is going to be a little less merry in a place usually known for its frivolity, carefree attitude, and high spirits. I'm talking, of course, about South Africa. Those Cape Town crazies are at it again, only this time, it's not just black people whose civil rights are being violated. This time, it's the children. A lot of kids are going to have a Christmas containing upwards of thirty percent less holly, and forty-five percent less jolly in South Africa this year. Why, you ask? Well, I'm telling you why. Because this year, when all those doe-eyed little Afrikaners write their Christmas wish lists to send to Santa, there will be no place to send them, thanks to South Africa's Advertising Standards Authority.

SOUTH Africa's Advertising Standards Authority has banned the Post Office from inviting children to write to Father Christmas, on the grounds that it would mislead them, the SAPA news agency reported Wednesday.

A Post Office commercial gave children an address to which they could write to Santa Claus with their Christmas lists, but Cape Town journalist Andrew October told the authority that unless the Post Office intended to give the children the gifts they were asking for, the commercial should be canned, SAPA reported.

October said the ad encouraged "a falsehood that could break the fragile spirits of the already disillusioned youth of South Africa".

The authority ruled that the commercial was in breach of a clause in the advertising code of practice which says advertisements should not exploit the "natural credulity" of children.

It added: "The directorate was of the opinion that it could conceivably be extremely upsetting for a child who does not receive the requested presents to believe that s/he has been too naughty during the past year."

What happened to you, South Africa? You used to be cool.

Yes, you read that right: the SAPA news agency. Yeah, I didn't think those jokers were still in business, either! Well, you learn something new every day. But what's even more shocking is this South Africa business. Now I'm sorry, but I was under the impression that sending letters to Santa was a time-honored tradition when children all over the world could finally find an acceptable outlet for their boundless greed. I know the postal service in my town always gives an address where kids can send their letters to be forwarded on to ol' St. Nick. It's fun. All the little gentiles in town write out these long letters to Santa explaining how very good they've been this year and how they would like the following toys or entertainment products. Then they show the letters to their parents, who read them and find out what their kids really want for Christmas. Then they send the letters out to the advertised address, where all the letters are collected and promptly heaped into an incinerator. Then the parents give their kids the gifts they bought for them back in July, and everyone is happy, except for the kids, since they didn't get what they wanted, but in the spirit of the holiday, everyone just tunes them out. 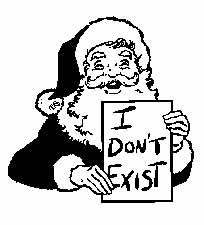 So the Advertising Standards Authority would be fine with an ad like this?

But the South Africans are putting a stop to the festivities. And why? Because they think the kids will have complete mental breakdowns when they don't get what they asked for. Now I'm sorry, but what kid in the history of the world has ever gotten exactly what he wanted for Christmas? Telling these kids they can't send letters to Santa out of fear that they'll freak out when they don't get what they want is almost as good as publishing "THERE IS NO SANTA" on the front page on the newspaper. When you remove all hope that a letter to Santa will bring results, it can only mean that there's nothing to hope for. And these kids need all the hope they can get. Like the article says, these kids are disillusioned and fragile-spirited. They're not expecting much for Christmas to begin with. This is South Africa we're talking about! They'll be happy as long as Santa doesn't bring them a big bucket of AIDS. Now they can't even ask for that? There are going to be a lot of sad kids with no immune systems this year, Virginia.

And the justification for the letter ban doesn't even make sense. I mean, I know what that October guy is saying. It's the whole truth-in-advertising deal. But he's obviously just fishing for a big break to make his career, and he'd love to bust a big story about a government agency breaking the law. So he's just a dipshit. But the fact that the agency tried to play off "it could conceivably be extremely upsetting for a child who does not receive the requested presents to believe that s/he has been too naughty during the past year" as a viable excuse is just sickening. Now, I've seen a child get upset over not getting the present he wanted before. That's unavoidable. But I've never seen a child break down into a spiral of ever-mounting guilt for his past naughtiness because he didn't get the Light-Up Double-Bladed Lightsaber he wanted. 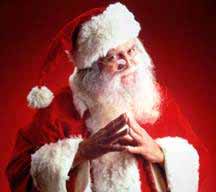 Do these people honestly believe that a single child in all of South Africa, upon receiving a gift different from what he requested, will stand up and say, "Mater, Pater, it seems that Santa has brought me a gift different from what I requested. It is clearly evident that this tragedy has occurred because I was a naughty, naughty child throughout the past year. I felt that I put in my best effort, but apparently I was simply not good enough. I see now that Santa's standards are ridiculously high and that I can never meet them, so I must now end my life by stabbing myself in the heart with a sharpened candy cane. I should mention before I go through with this final act of attrition that if I misbehaved so egregiously over the past year, it must certainly reflect negatively on you both as parents. Know that with my last breath, I curse thee." Come on! Kids cause trouble! That's what they do! It's what they're there for. No kid can manage to be a perfect angel twenty-four hours a day for an entire year. They can always be a little nicer. If a kid doesn't get what he wants and takes that as a cue that he should be less naughty, that sounds like a good thing to me!

Frankly I'm appalled by the actions of the South African government. I expected a little more from the country that brought us Apartheid, Bipartheid, and New Diet Apartheid. I just thank my various gods that I live in America, home of the free, where people are still free to dupe kids into being good through outright lies.

Weekend Web: It's All About the Love

Hello friends, Zachary "Spigot Jones" Gutierrez here with a very special Weekend Web. The FYAD team and I travelled to the deep south this week to ask folks what their otherwise worthless opinions are on people of color and differing religions. Their answers just might surprise you.

Wait, that isn't very surprising. If you want to see me handle delicate issues poorly then just keep clicking in this general area. You'll thank me on your wedding night.