I Was a Teenage Crustacean

What my future very well could have been. I'm widely regarded as the youngest, most attractive writer here at Something Awful. You could say I'm the Ricky Martin to this site's Menudo, the Hitler to its Axis, the Andy Rooney to its 60 Minutes. I'm not being conceited, this is simply what the readers have been saying. Oh yes, I see what you're posting on your electronic bulletin message boards and relaying with your newfangled smoke signals. Word is I'm a sexual ninja, and instead of killing people with throwing stars I kill them with my penis. I'd actually like to deny that particular rumor today. I really would, but I can't. As flattering as all this attention is, however, I wasn't always a universally loved playboy living the good life and eating chili from the navels of beautiful underage virgins. Far from it.

I was born with a rare condition called "asthma", in which a person's skeleton grows as a protective shell around their body. You see, normal humans usually have a skeleton inside their body, located somewhere near the spleen. This explains why you can't roll around in used medical needles, or whack your leg repeatedly with a chainsaw. Maybe science will progress enough to make these dreams come true one day, but as it is you're fucked without an exoskeleton. As though this condition weren't enough, I was also born with "herpes", which meant that I had claws instead of hands, and my entire body was a reddish red. As you can imagine, the combination of these ailments ensured my lot in life as a hideous freak. My own mother would call me horrible names in disgust, like "lobster boy", "my crunchy little mistake", and "Dennis". As hard as this was on a little kid, I had a tough shell (lobster humor), and was able to move on. Besides, these early taunts were minor compared to the pains that lay ahead.

Consider the childhood activities you took for granted. Riding your bike, playing kickball, and making snowmen... these are all things I couldn't take part in due to my allergic reaction to boiling water. Because I was seen as inhuman, no one in my family was ever sure what to get me for my birthday and Christmas. Presents ran the gamut from office supplies to Russian mail-order brides, all of which I ate in a false display of joy designed to appease the gift-givers. My inability to truly enjoy childhood and relate to my own family overwhelmed me, and I started drawing comics based in part on everyday events to vent my frustration. These comics began a lifelong love of creative writing and art that would last around ten years or so. The following is one of my earliest creations so it's sort of crude in presentation, but I think it has a certain charm that still holds up today. 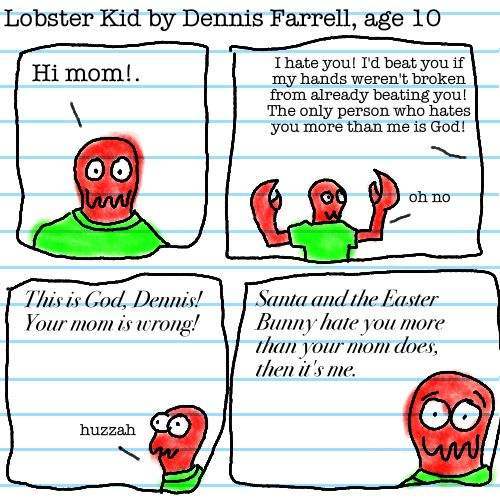 Life continued to kick me in the smooth, armored crotch throughout adolescence, and things certainly didn't get any better in high school. I realize that everyone has a tough time fitting in at that stage of their lives, but I'm the one writing this piece, jerkass. It always has to be about you, doesn't it? Can I get back to the article now, your highness? Are you sure? Jesus.

As I was saying, high school was tough, but gym class was particularly difficult. Sure, changing in front of everyone was embarassing, but actually playing sports was like living in a living hell. My claws would puncture any ball that was mistakenly passed to me, my exoskeleton made sweating near impossible, and I would urinate during moments of intense physical exertion. That last part had nothing to do with my lobster condition, but it was embarassing nonetheless.

The senior prom was a fitting conclusion to four years of torture. I was unable to get a date for several weeks, and when a particularly unattractive girl actually agreed to go with me, I ruined the moment by urinating the bed and waking up. Stubbornly determined to attend the prom, I eventually wound up taking a lamp as my date. The night was surprisingly uneventful until it was announced that I had been voted Homecoming Queen. Weeping happily, I left my date by the punch bowl and took to the stage amidst roaring applause. The crown was placed on my head, and the entire auditorium burst into laughter as a bucket of butter sauce rained down on me like a golden shower from Marlon Brando. Devastated, I ran from the building, only to discover my date making out with the janitor in the parking lot. Completely crushed, I realized that something had to be done to stop my torment.

After saving up money from my job as a computer chip taste-tester, I consulted a doctor to see what could be done about my condition. As it turned out, there was an exciting procedure that could make any beast appear human, the same operation that Rosie O'Donnell had previously undergone. Luckily for me, there had been incredible medical advancements since her surgery, and I emerged somewhat normal. My outer shell was removed, and a skeleton system was placed inside of my body. This skeleton, as my doctor explained, would allow me to walk, run, and break my legs. The future was limitless! There was, however, a problem.

My skin had never seen daylight, and immediately following the surgery I was little more than a lump of pale, wet flesh. In order to guard my highly sensitive skin, I would have to remain indoors for months at a time, avoiding human contact and only venturing outside for exercise on the rarest occasions. Suddenly, I knew what my occupation would be. Once I learned that the position of Harry Knowles had already been taken (presumably by Harry Knowles), I reluctantly gave up on my dream career and settled for a job as an internet humorist. While I don't make millions of dollars, I do have a great deal of creative freedom. If I felt like it, I could even write a subpar piece about lobsters, or inexplicably end an article with a picture of a Horsebee.

I was going to use this spot to cleverly compare State Og to a leper, but that idea just fell apart. GET IT?

People are no longer afraid of the next deadly virus or terrorist attack. Crappy TV shows have completely desensitized the public, but people will always be afraid of people with baseball bats chasing them at night. I can assure you that Salt Lake City once again recognizes the power of State Og. (Note: Mormons make really strange noises when surprised.)

Will those Mormons ever learn? No, you're wrong. They won't. Check out this week's State Og, before something vague happens!