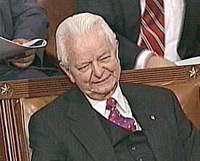 The undead are a sneaky lot, and could infiltrate such vital organizations as the U.S. Senate and the American Idol judge panel.So you've decided to try to survive a zombie invasion! The road ahead of you is long and hard and possibly filled with more sexual innuendo, but with the help of this guide you might just live long enough to read the entire thing. Before we get to the life-saving essentials which you are undoubtedly frantically searching for while hiding in a boarded-up farmhouse, let's take an unnecessarily long look at how you got into this situation. Zombie invasions are typically brought on by one of the following:

Radioactive Comet - As comets pass through the cosmos, they collect lots of things; from space dust to pogs to radiatioactive materials. Unlike the friendly radiation found on Earth which powers our vibrators and nukes Japan, however, space radiation's only useful purpose is raising the dead.

Rampant Virus - Scientists simply have nothing better to do than concoct viruses which they don't fully understand. Once their creation has completely baffled them, the only choice they have is to let it go free or store it in a facility with lax security policies.

Too Much Graham in Honey Grahams Cereal - For far too long we've been asking ourselves "How do they cram all that graham?", when the question we should have been asking is "Is it right?" Man has defiantly slapped the face of God in the pursuit of a tastier cereal, and one day we will be struck down by our own hubris.

Now that we know how the zombies got here, the next step is learning how to spot one. The undead typically wear tattered clothes, are covered in filth, and have a pungent stench. If you see someone that fits this description and you aren't at a Phish concert or an anti-capitalism protest, you've probably spotted a zombie. Is he or she moving slowly? Unlike the zombies portrayed in 28 Days Later and the recent Dawn of the Dead remake, true zombies move at roughly the same pace as a slug that's been shot with horse tranquilizers. Most people think this is a weakness, and that zombies lurk at this slow speed due to muscle degeneration. This measured pace is, in fact, a rather ingenius tactic which gives them time to decide which of the following attacks to unleash on their victims.

- Lurch forward, trip on own feet
- Get arm stuck in between boards while reaching through a window
- Stumble forward, trip on another zombie
- Walk directly into an object below line of sight or into a wall/fire
- Mumble
- Bite own arm
- Reach hands outward and moan
- Lurch backwards, fall down a well
- Cast magic missile (damage = [level d40] + level) 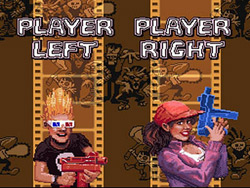 As the classic Zombies Ate My Neighbors illustrates, your best weapons against an onslaught of zombies are a watergun and a pair of 3D glasses.

If none of the methods of detection above work, be on the lookout for someone eating an unusual amount of human brains. Should you actually find yourself face-to-face with a zombie, the heart of this guide will come into play: the Doos and Doo Nots of dealing with the undead (the extra Os are for added spookiness!).

Doo Not: Let a zombie drive. Ever. No matter how much he protests or claims "I'm good to drive man, don't worry", his slow reaction time and nonexistent fear of death mean certain disaster.

Doo: Make a poorly planned excursion from the safety of your shelter to turn on a generator, or to find much-needed supplies such as gasoline and underpants.

Doo Not: Engage in hand-to-hand combat with a zombie using the ancient martial art of Soop Du Joor (translated: Allowing The Enemy To Bite Your Face).

Doo: Have the common courtesy to tell your fellow survivors that you've been bitten by a zombie and will probably try to eat them within the hour instead of just shrugging and hoping the problem goes away by itself.

That does it! Thanks for buying this guide/looting it from a storefront long after I've been eaten and can no longer receive royalties. With any luck you'll be able to survive your upcoming encounters with the undead and find a haven of relative safety, then die when you bend over to tie your shoe and fall face first into a curb.

Oh boy, it's Saturday and that means I've got a State Og update for you! Well not just you, I guess I could let a few of your friends in too.

After careful consideration, we're issuing a recall for the following products this month: The Amazing Patented Patent Forger, Og Brand Reversible Condoms, and Fudgey, the Happy Fudge Snack Made Entirely of Asbestos.

Check out the update here, but don't get carried away and invite a bunch of people I don't even know. My parents get back on Sunday morning and they'll freak out if there's even one stain on the carpet.