A few hours ago, Rich "Lowtax" Kyanka showed me an episode of Bobobo-bo Bo-bobo. It was pretty much what I'd assumed all anime shows are like (zany, loud, incomprehensible), but he assured me that it's much more so than usual, and I trust him because he's the boss! Similarly, I'd be unable to identify the starter images from this thread if they were presented in some sort of police lineup with real anime GIFs, but I'm sure they're clever because Palpek makes good stuff. If you actually enjoy and understand anime, like some people on the Internet, you'll probably get a lot more out of these Photoshops! If you're actively repelled by anime, like the clerk from the pawn shop down the street, who walked in during Bobobo-bo Bo-bobo and immediately left in disgust, well, see you next week! 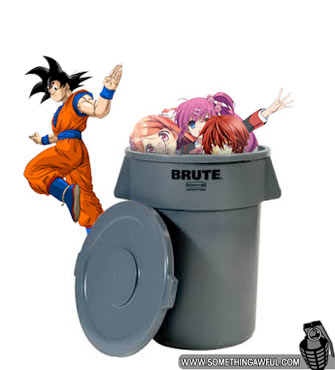