Failed movie-license games litter the ROM Pit archives like unsold E.T. cartridges clogging a New Mexico landfill. The Something Awful Forum Goons wondered what would have happened if NES-era developers had struck deals with B-movies instead of blockbusters. The results certainly couldn't have been worse. In fact, these images suggest the games would have been much, much better. Let's weep together for what might have been!

the-ruiner stared this theme, then laughed maniacally while writhing on a revolving bed covered with cash.

For some reason, I feel a strong affinity for both StrungOutFlip's image and The Cleaner's audio contribution. 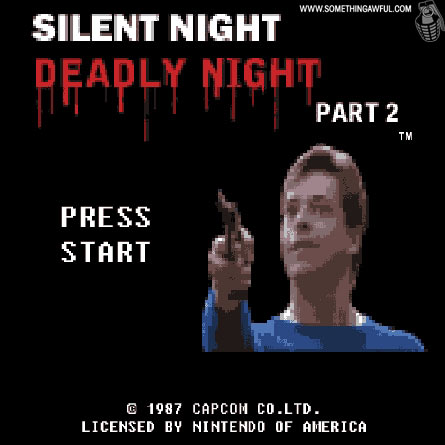 Yabanjin calls back a time when there were flowers all over the Earth, and skies came in four shades of blue.

HastyDeparture demonstrated true dedication to this theme by crafting a game out of worthless kangaroo vomit.