Does your Team Have a Hustle Player?

Is he white? Do local fans and media love him simply because he is white? 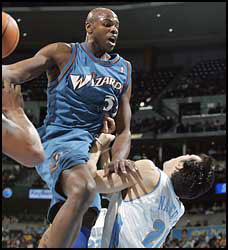 HUSTLE Now that we’ve covered on-the-court stuff I think it’s we tackled a more sensitive subject, race. To spare myself a bunch of angry emails I’d like to make something clear from the start: I know not every white athlete is a hustle player. This is a horrible, racist sentiment, and using that same logic I could easily conclude that all AIDS patients are gay or that all idiots are Sacramento Kings fans. Since the county health clinic isn’t always bustling with arguments over showtunes and hair care products and I know at least a few gas station janitors who don’t come from Sacramento, I think the jump in logic makes sense.

Sports media isn’t totally to blame for this phenomenon. Rabid sports fans are a cantankerous, superstitious bunch, and will deny any semblance of logic or critical thinking up to the day they’re buried in their favorite “Celtic Pride” T-shirt. Please note that this example is sort of skewed, since Bostonians own nothing but “Celtic Pride” T-shirts and their “favorite” one changes from day to day, depending on which one has the fewest holes in it. When more people know your hometown for “funny accents” than “contributions to America in the last two decades”, you take what you can get.

But why do sports fans and media latch onto white players? What makes them more popular than differently-raced players with other things to offer, like talent? Is it because if a hurricane hits and the lights in the stadium go out they can trail the white players to the exit? Is it because they’re scared of people who pronounce “-er” like “-urrrrr”? Do fans, in fact, pine for the days when teams had names like “The South Carolina Dogged Gentlemen” and shot granny-style from the free throw line? Or are they just unable to relate to people who can’t appreciate the finer things in life, like “Everybody Loves Raymond” and the soothing tunes of Kanye West?

Sadly, the truth may never come to light. Although we may never know why Bobcats fans bust a group nut every time Matt Carrol touches the ball, we do know one thing: what another teammate, who knows the sport better than anyone else, would say, in contrast to the opinions of a sportscaster or rabid fan. Really I’m not sure how that helps to establish my point, but my other options are kind of limited and HEY LOOK A CHART: 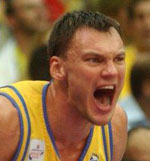 Sportscaster/Fan: Wow. Look at that guy. He’s got heart. That guy knows how to win a basketball game, even if he’s telling the team things they don’t want to hear. Gee wilikers.
Teammate: I bet somebody runnin’ the other direction with that dude’s Willie Nelson CDs. 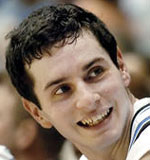 Sportscaster/Fan: What an upstanding young man. If that guy keeps up the intensity and the positivity he’s going to go really far, and you can mark my words on that. This communications degree shows I know what I’m talking about.
Teammate: What he smilin’ at? Crooked teeth police finally track his momma down? 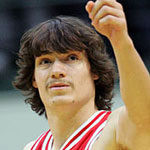 Sportscaster/Fan: Look at that intensity. The sky’s the limit for that kid. What a class act. You don’t see someone that classy very often.
Teammate: Aight, Adam, I want you to point at the nigga that gave you a dirty sanchez.

Sportscaster/Fan: I know these guys are supposed to be stoic but it’s hard not to laugh if you’re this guy. You know you’ve got tremendous upside, amazing skills, and a wonderful smile to boot.
Teammate: I’d say I want to punch him in the side of the head but it looks like that mean ol’ nigga from Thundercats with the big metal fist done did that. 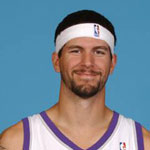 Sportscaster/Fan: That’s the grin of a man with talent. He’s confident, and by gosh he should be. Not many people could accomplish what this man has in the NBA.
Teammate: Nigga need to stop puffin’ on JC Penney’s dick and pick up a basketball.

Ben, you hit the nail on the head: we don’t. All those millions of people who say they enjoy sports? They’re just doing it to piss you off. While you sit back and rage at these people, these animals, who have the audacity to enjoy things, they’re sitting in sports bars and arenas around the country laughing at you. What do you think they show on those big screens in sports venues, Ben? The game? Hell no. They watch opera or at least something on Bravo. They enjoy a fine Chardonnay with their “favorite team’s” offensive linemen, who are surprisingly well-versed in the works of Chaucer and Sartre. Then, right before they go home, they put on some face paint, grab a foam finger, and retire to their beds with the slyest of smiles on their faces. All because of you, Ben. All because of you.

1.) Yes. Since the Pistons’ “four guys with no personality and Rasheed Wallace” system fell apart last year, God realized he had to take pity on your humble city by way of baseball. He brought His Divine Finger down from His Eternal Kingdom and touched every single Tiger, hoping the residents of Detroit could forget, if only for a second, that they are living in the asshole of America. Why didn’t he just clean up the city or make every gun in the metro area instantaneously jam? God can only do so much, Walter, and he thinks you shouldn’t look a gift baseball team in the mouth.

2.) Since you are a Detroit sports fan, you likely live in Detroit or at least in Michigan. As such, you need to hear something (even if you don’t want to): your life is already over. You’ve been living on borrowed time your entire life, and it’s only a matter of time until a hand reaches out of an unlit alley and snatches you into the darkness, where a bunch of funny-talking gentlemen with rags on their heads will perform ballistics tests on your trembling, sweaty forehead. If anything, Ben Wallace’s exit is a small boon for your city: he’s easily one of the blackest people in America, and it’s hard for the sun to shine on a place where one man’s pigment sucks enough of its energy to power a fleet of solar cars. 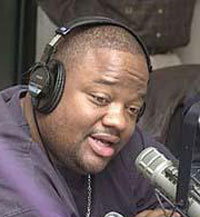 Not familiar with Jason Whitlock’s work? Don’t feel bad. As a sports columnist for the *chuckle* Kansas City Star, Jason spends a lot of time writing about his home team, the *snicker* Kansas City Chiefs. You know, the same Kansas City club that starts every season as a playoff contender until about fifteen seconds into their first game, at which point a lightbulb goes off over everyone’s head and someone says “wait a minute.... why do I keep forgetting these guys suck?” It’s a vicious cycle, but Jason is paid to write about it every time it happens – those three readers of his are loyal as all getout and they really, truly want to know his opinion on the state of *tee-hee* Missouri sports.

Not only is Jason an important figure on Kansas City Star sports page (a title just as prestigious as “World’s Biggest ‘That 70’s Show’ Fan” or “Top Presidential Child Molestor”, he’ll have you know), he’s also an idiot. I know it’s strange to question the intelligence of a man who chose to write about the Trent Green footballin’ machine for a living, but hear me out. In his August 1 column, entitled “Sizing up Turley not easy”, Jason lets us know he doubted the athletic ability of new Chiefs tackle Kyle Turley because Turley is, well, white. This coming from an “award winning” columnist who goes to sleep snuggling a body pillow he’s painted to look like Jeff George. Apparently the only worthwhile white athlete in the NFL is a fortysomething quarterback who hasn’t thrown a football in four seasons. Fuck that Manning faggot, boys – Jeff George goin’ be winnin’ a Supah Bowl!

Don’t get me wrong. I’m not one of these idiots crying reverse racism every time a black dude makes a crack about a white guy. I don’t think I’ve ever started a sentence with “I’m not racist, but...”, and to my knowledge I’ve never held an oh-so-poignant discussion about how there isn’t a White Entertainment Network. I just want to know how stupid a person has to be to make a crack about a white person in the middle of Kansas City. Since most people around dem parts probably see Whitlock’s picture in the paper and think there’s a printing mistake of some sort, what would posses him to think “welp, I live in a Midwestern city, better start hating on white athletes because they’re white”? I’m pretty sure it’s the same logic Bruce Willis used in that “Die Hard” movie where he had to hang around in Harlem with a sign that said “I Hate Niggers”, but to be honest I don’t see a lot of people interested enough to plant bombs in the office of the Kansas City Star, a newspaper that recently ran the headline “Soybean Association Chief Appointed Regional EPA Administrator”.

But Jason, this update is about helping, not hurting, so I just want you to know this: my first response when I saw your picture and read your column was “those people can read now?”, and, well, I now understand that was a bad assumption. Understanding is a two way street, Jason. I’m sure that you now know not all white people suck at sports, just like you don’t spend your days shooting at people and arguing with the Koreans working at the convenience store over on nine-mile. If a group of misguided, angry farmers haven’t surrounded your office with pitchforks and torches, I really hope you’ve learned your lesson. Assuming your mother managed to hock enough stolen hubcaps to buy you some Ritalin, that is.

Questions? Comments? Love letters? Email Pantsfish and tell him what you think!