A meditiation on adventure slash 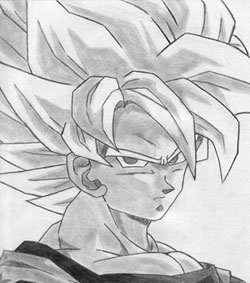 Tom Brady wiped the sweat from his forehead and took a drink from his waterskin. It had been a hard trek, and with Goku's constant pushing exhaustion was creeping up on him. He didn't know how much longer the journey would take – Goku's answers, it seemed, were as cryptic as his plans.

Annoyed as he was Tom could not bring himself to hate his mentor. He was brash, yes, and a bit of a slave driver, but he was also cognizant of the great potential Tom possessed. He respected it. That, Tom thought, was more than he could say about his past mentors, greedy men with shifty eyes and material aspirations.

“We stop here.” Goku's shadow loomed over Tom. The legendary warrior reached over his shoulder, grabbed the waterskin, and emptied it in a single gulp. Before Tom could react Goku incinerated the skin in his bare palm and released its dust to the wind. “We have reached the proving ground.”

The hike up Fire Mountain had taken seven days. Tom's hands were cracked and bloodied. He was dirty and unshaven, and every crevice of his muscular young body was red with chafing. The mountain was nigh unscalable in places, and the temperature fluctuated wildly between night and day. Tom spent the entire journey freezing or burning, with no in-between to speak of. The conditions were hardly optimal for a two-time Super Bowl champion quarterback.

Devilweed strangled what little road sat in front of them. It snapped and hissed at Tom when he drew near. Surely Goku must be wrong, he thought. Even a fool can see there is nothing to demonstrate here, unless he wanted to prove he could bleed.

With a snap of Goku's fingers the entire patch of venomous weed was gone. In its place sat a pristine field with a podium at its center. Atop the podium floated an orange, star-flecked sphere. It was the final Dragon Ball! Tom's first instinct was to rush the podium and take the ball in his hands, to relish the power it bestowed upon him. He stopped himself, however. Goku's power levels were amazing. He could destroy the quarterback with less than a blink if he so desired.

“You have done well,” Goku said. “You are a man of incredible talent, yet you kept your attitude in check. I monitored your thoughts as we approached the clearing. A weaker man would have attempted to steal the ball. You did not.”

Brady smiled. After a week of adversity a simple compliment from Goku was nearly payment enough. He smoothed his jersey with his chapped hands and looked to his mentor. “I am happy to make you proud, master. Your training is what harnessed my true abilities.”

Goku's face remained stern. He motioned to the ball. “Tom, you are a hero,” he said. “A champion. Millions of people rise and fall on the strength of your actions, and you have yet to falter. This is your reward.”

Tom took the ball in his hand. Power surged through his body. A hole opened in front of his feet, and from it emerged none other than Shenron, the Surpeme Dragon! He congratulated Tom's good fortune and asked him what he would like to wish for. After some consideration Tom placed the ball back on its pedestal, and, with a grin, spoke to the dragon.

“I would like a vagina to emerge on Peyton Manning's forehead,” he said. “One to match the cavern between his legs.”

The dragon nodded. For a brief moment Tom could hear his colleague's anguished screams. Then the mountain was silent again. Goku pulled a football from his rucksack and pitched it to Tom. “Your training is complete,” he said. “May your victories on the field match your growth as a hero.”

Tom nodded. With a flick of his wrist the football disappeared over the mountain's peak. It was impossible for Goku not to smile, if only for a second. His lips parted and the sun shone over the mountain, briefly illuminating the two greatest heroes the world had ever known.

A meditation on inspirational slash 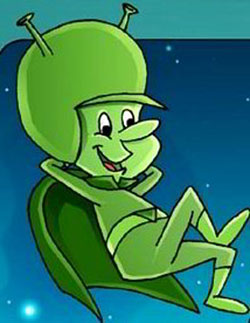 It had been a long winter. By Tiki Barber's estimation it had taken six months, and it didn't act like it was going to stop any time soon. It was always like this in New York's early months: Cold. Gray. Impersonal. Winning and losing, these things didn't matter to him anymore. All he cared about was getting home, getting to the one place in the city that didn't look like the inside of an airport. The problem was, even the house felt inhospitable in these cold months. It was unbearable.

The gun on the table in front of him was thick. Manly. Its gray was infinitely more comforting than the light, bluish haze that covered the city. Beside it sat a clip containing two bullets. One was for him. The third was for Eli. Eli would take Tiki's choice hard. Eli had no offense without him. Even in death, he was willing to offer his teammate and friend an easy way out. This, he thought, was the best gift he could leave the world. He certainly wouldn't be able to offer his state a Super Bowl title to brag about, no matter how much he wanted them to have one.

The green man on the table commanded more respect than any six-inch-tall person Tiki had ever seen. He was resplendent; His polished green helmet glowed under the dull kitchen lighting like an emerald alien sun. Perhaps this was fitting. He was, after all, an alien. The Great Gazoo, to be precise.

“I've been listening to you whine, Mr. Barber, and boy are you a ding-a-ling. A regular floo-flah.” Gazoo levitated from his post on the table and ripped the gun from Tiki's hand. The sighting notch tore a hole in the running back's lip. Blood dribbled down his lantern-like jaw and onto his pajama pants. The flow was so thick he swore he could feel his teeth stain red.

“It appears we have a bit of a gratitude problem here,” Gazoo said. “While no mere huuu-man could match my level of greatness, Mr. Barber, you come close. Youuuu are a legend here. Many of your fans wish to do what you're attempting but can't afford such a... fine piece of weaponry.”

“It's hard,” Barber said. “Every year the Giants are supposed to get to the Super Bowl, and every year we end up fighting to make the playoffs. I try to be a leader but I can't lug the whole team 5.1 yards per carry!”

Gazoo checked his reflection in Tiki's forehead. He adjusted his helmet and propped himself against a flowerpot. “What you need,” he said, “is a change of scenery.”

Barber was taken aback. He never considered going to another team! A world of possibilities exploded in his head. Every year a team won the Super Bowl – it was just a matter of signing with the right one. He'd do it for cheap, maybe, like Karl Malone did with the Lakers. It was a sure-fire formula for success.

“Not so fast, Mr. Barber,” Gazoo said. “On planet Zetox we don't know much about you humans and your idiotic ways, but we do understand American football. The Chargers might be the key to quick success, but you need a long-term goal. I happen to know for a fact that the Dolphins are a solid running back away from becoming the best franchise in football.”

Yes! Going to Miami was certainly better than painting the kitchen wall with his brains! He grabbed his cell phone and called his agent. The discussion was brief and by the time it was over Tiki was ready to pack his bags. The trade would be easy to work through. Then, when all the work was done and he was Tiki Barber, superstar running back once again, he smiled. The tiny demigod's honesty was refreshing. Sometimes all a man needed was a miniature green alien to put things in perspective.

A meditation on torture/murder slash 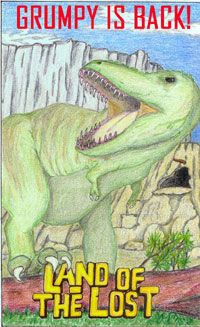 The part Jim Mora hated most was the dinosaurs. Those goddamn dinosaurs. They were everywhere. They crowded the plains; hid in the riverbed; gathered in clusters underneath the treehouse compound at night. Yes, they were large, and mean, and dumb, but so were most NFL athletes. Those traits did not bother him. What did invade his every waking thought was the smell of their excrement. In his old life, when he had control of the franchise and his biggest decisions ended in answers like “shotgun” or “3-4”, he thought he'd seen the worst of waste. On multiple occasions Michael Vick had mistaken his gym bag for a canvas port-a-john. Vick was a slight man. His bowel movements were anything but. Here in the land of the lost, though... these creatures knew how to drop a deuce. Mora spent much of the average day trying to choose if objects in the distance were boulders or turds. Often he picked “boulder”. Usually he was wrong.

This was not to say the humans were any better. The ones in Atlanta were bad enough, shipping him off to this prehistoric hellhole for the “betterment of the franchise”. But the family... man, oh man. He supposed their family name, Porter, was fitting: In the real world, away from all these fetid reptiles, they would be carrying around his luggage, not some goddamn magic wand that made dinosaurs talk. The dad was a know-it-all prick. The boy was much the same way, though puberty had not yet lent him his father's jocular, swaggering stride.

And then there was the girl.

This is where all the problems come from, he thought, fastening the length of hemp rope around the tree and then her scrawny, bug-bite-pocked wrist. It's the girls. Always with the girls.

With men Jim Mora had a saint's patience. He knew Vick didn't know how to read. He worked around it, explaining plays with toys and colorful plastic fridge magnets. Girls, though – especially of the preteen variety – those were a different story. Every dirty look she shot him, every flippant, is-she-insulting-me-or-not comment, they all dug into his brain and burned like shards of the brightest triple moon. It was easy to dwell on these things, out here, six thousand miles and six billion years away from his homeland. It was also easy to find scraps of metal, to spend hours a day fashioning serrated hunting blades. Killing blades. In fact, the only hard part of capturing a preteen girl and tying her to a tree was keeping the dinosaurs away. A pile of rancid, sun-bleached cheetah guts, placed two miles away from his location, had done well enough to ward them off so far. Hopefully that would continue.

“My dad will find you,” she said. “He's an outdoorsman. He'll find you. He'll take that shriveled little pecker of yours and nail it to a –”

He slapped her so hard his fingernails stung. She struggled against the ropes in response, so he balled his fist and drove it hard into her abdomen. Air and vomit escaped through her mouth and nose in a single reverse gasp and she shut up. She just almost spoke, he could see it in her face, but she didn't. Good. He was willing to barter respect for pain. She'd be begging to die soon.