How To Play Tabletop Games 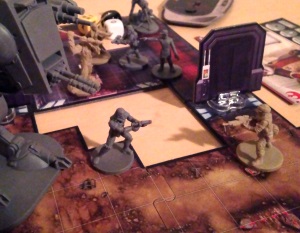 This exclusive iPhone photo shows me on the brink of losing. Any photo of any game would show the same.You like to press buttons while a glowing rectangle sears images of murder and XP bars into your eyeballs. You're vaguely aware that some people have fun moving bits of cardboard and plastic around on a table. It sounds interesting, but like all real world activities it also sounds frightening.

This article is intended to help you, the video game player, make the transition to tabletop games. It all comes down to understanding a few key differences between the two genres.

While this guide can be applied to any game, I should note that I wrote today's feature with Fantasy Flight Games' Imperial Assault in mind. There are a few reasons for this:

In video games your friends are a list of people you don't really know whose names you occasionally glance at. You try not to interact with them for months at a time. This silence is typically only broken when one of them either begs for an in-game item or mistakenly messages you.

With tabletop games, friends are actual human beings with faces. They must be willing to occupy the same room as you and tolerate your presence for several hours. When they are sitting directly across from you it's almost impossible to pretend to be Away.

So, this is really weird. The manual is pretty important. It's got loads of words in it. Most of these words are in your language, and they're worth reading.

It's not a single slip of paper folded in half. The text does not simply say, "You might get some seizures, so watch out for that."

The manual contains all of the rules. It's how you learn to play. If you sit down with a tabletop game and wait for a disembodied voice to tell you exactly what to do, you'll be waiting a pretty long time. At least two hours.

Dice rolls aren't handled behind the scenes. You actually pick up the dice with your hand, then roll them on to the table and interpret the result with your eyes and brain. 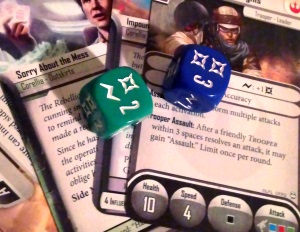 Reminder: When a dice roll doesn't go your way, you can't reload a previous save file.That might sound tiring. Trust me, it gets better.

When it comes time to move your character around the board, you have full freedom. Your hand can literally move in any direction. You can even tap into additional degrees of movement by bending or twisting your hand. The options are limitless!

If your fingers encounter an object, they can actually feel it. It's like haptic feedback without the need for expensive peripherals.

The cards that come with your tabletop game are physical objects. You can hold them - there goes that haptic feedback again - and use them to do things in the game.

These are nothing like Steam trading cards. You do not get an endless supply of them. Don't sell them for 4 cents apiece in the hopes of making enough money to buy another tabletop game in three years.

This is the most crucial difference between tabletop and video games.

When someone else is speaking you can't cut them off and skip ahead to the gameplay. They will probably notice if you stop paying attention to them, and will almost certainly consider it bad form if you spin around in place, jump up and down on the table, or run against a wall during their dialog.

Star Wars: Imperial Assault
If more people buy this wonderful game I'll have a larger pool of opponents to lose to. 10/10

Fallout 4
Looks nicer and more colorful, plays better, provides a more interesting environment to wander around for dozens of hours, but I come to Fallout to make occasional choices and be recognized by NPCs as a low-Intelligence doofus who is somehow the most gifted surgeon in the wasteland. 7/10

Sword Coast Legends
I'd like to give a confused handshake to the person who called up the D&D cartoon team and asked them to make Neverwinter Nights. 6/10

Rise of the Tomb Raider
Lara Croft And The Ancient Mystery Of Launching On The Same Day As Fallout 4. 6/10