A Guide to Live Sporting Events 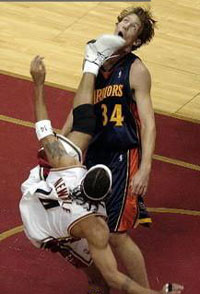 I think every article on the site should end with a picture of Mike Dunleavy getting kicked in the head. By the second half (also known as “endgame” if you have a level 60 Paladin and own more than one pair of camouflage cargo shorts) you should be able to relax and enjoy the ballgame. For a few minutes, anyway. This leads us to Pantsfish’s Final Law of Sporting Events:

The more money you spend on attending, the more likely your team is to lose.

I can’t tell you exactly why this is true but I can guarantee you it is. Sports teams love nothing more than crushing your hopes. You know that scene in every basketball movie where the coach is like “alright, we got our families in the stand, we have to win this game to save Tommy from that tumor growing out of his neck”? That’s bullshit. Do you think those teams care? Do you think they even know you scrimped and saved for two months so you could haul yourself up the the capital to watch them play? Hell no. If anything, they’re throwing darts at a picture of your face and wiping their asses with the $150 you spent on a ticket. You know when your favorite player missed that last second shot and you could just swear he looked at you and smiled? He did. Why? Because he’s a gigantic fucking asshole.

That said there are still plenty of ways to have fun, even while your team is down 20 points and the same Multiple Sclerosis kid from earlier’s wailing because someone forgot to pull the smoldering sparkler stick out of his good ear and he’s unable to tell them what happened. You could always go out and hit the smoking section, if anything to count all the 40-something account executives fumbling with poorly-rolled joints because they mistook the game for a Jimmy Buffet concert. You could go to the gift shop and find out the difference between a $20 T-shirt and a $40 T-shirt (hint: it’s the number of times the word “they” is misspelled on the back). If you’re in Indianapolis you could even visit the main lobby and play a rousing game of “try to get directions from the hermaphrodite working the help desk”, where the answer to every question is “I think it’s on the interstate somewhere, let me consult my ancillary penis”.

Whatever you choose to do the game will probably be over by the time you’re done. Most venues employ top-secret time-bending technologies, ensuring non-game activities (the drive there, halftime) last about six hours, while the game itself runs maybe 20 to 30 seconds. This pretty much guarantees the game will be over quickly, sometimes hours before you even make it to the arena. There’s no need to feel bitter: Disney tickets cost a hell of a lot more and you’re still guaranteed to come out sore and covered in vomit. At least at a ballgame you don’t run the risk of attending during some sort of “gay pride day” – speaking from experience, Mr. Toad’s Wild Ride gets a hell of a lot wilder when you’re fighting off a six foot tall Brazilian man wearing a shirt that says “I want you inside me”.

Your final goal of the night will be to find your car. Again, this is harder than it sounds. If you took my advice at the beginning of this article you probably parked your car in a garage. Given that most cities are composed entirely of municipal parking garages your innocuous search could end up looking like that movie “Labyrinth,” except instead of David Bowie following you around it’s a bunch of people who crawled out of the bowels of the city to ask you for spare change. Remember: living in a sewer, sporting green skin, and having three fingers on each hand does not automatically make a person a Ninja Turtle. Leonardo would have absolutely no need for the 47 cents in your jacket pocket, and that scab-covered thing hanging from the front of his cut-off Wranglers is certainly not a “katana”.

With these tips in mind you should have no problem procuring tickets and enjoying a professional sporting event, be it football, basketball, baseball, or even a fake sport like soccer or hockey. Most of the things I said can be applied to any event, assuming you’re not a hippie douchebag trying to get the most enjoyment out of “ultimate frisbee” or whatever the fuck you faggots call it when you’re not trying to find a way to match your flip-flops with your favorite bandanna.

NASA and NBA Team Up for America
HOUSTON – A lazy eye and a bald spot were all it took to save US taxpayers billions of dollars.

NBA stars Rasheed Wallace and Tracy McGrady took their heroics off the court Wednesday when a NASA satellite flew off course, endangering years of work and several billion dollars in research and construction money. Using a series of compact mirrors, fiber optic tubing, and, most importantly, the unique physical talents of Wallace and McGrady, NASA scientists were able to set the satellite back on course – earning nationwide accolade for the two athletes in the process.

“They were lifesavers,” NASA spokesman Aaron Stull said. “That satellite could have ended up anywhere... I don’t know what we would do without them.”

Wallace said he was happy to help. His bald spot, which poet Sylvia Plath once referred to as “a gum spot on God’s carpet”, was affixed to a small round mirror and used to beam information into outer space. McGrady’s eye was used as a waypoint for the data, which was then sent directly into the satellite’s CPU.

McGrady declined comment on the situation, fearing excessive interviewing might endanger the injury-prone vagina in his back.

“It’s an amazing thing,” Stull said. “T-Mac’s eye was bent at a perfect angle – more precise than anything we could come up with – and Sheed nodded his head just right when we put on the right DMX track.

“It’s a real blessing to have people like this willing to help us. I’d much rather give them a dimebag and a few pairs of tennis shoes than try to do more math. That’s what got us there in the first place.”

Please note that this is written a full week before the games are played and only odd-numbered weeks will be covered. This means Evan “Pantsfish” Wade can’t judge by the previous week’s games, only the week before that. If you have a complaint feel free to take it to the breaks, muthafucka.

Panthers 14, Buccaneers 8: YARR, WHERE BE THE OFFENSE TO GO WITH DIS ‘ERE MARGINALLY NOT-SUCKY DEFENSE

Bears 24, Vikings 10: I don’t know who replaced Rex Grossman with a good quarterback, but someone needs to tell that mufuh I’m writing good things about him so he’ll come back to Bloomington and pay my rent for me.

Bengals 24, Steelers 35: Who wins? Who cares? The real entertainment’s going to come when Carson Palmer and Heinz Ward attempt to hide in each other’s vaginas and roll around the press room floor like a big tri-racial pussy snail.

Packers 7, Lions 13: THE COMBINED THROWING ACCURACY OF KITNA AND FAVRE GUARANTEE AT LEAST ONE LOOSE FOOTBALL WILL FLY TO INDIANA AND UNSTICK MY CAPS LOCK KEY

Jaguars 14, Colts 32: “Yep, looking good, lots of momentum... what? We’re going to Indy? Someone get the bleach in case Peyton pisses all over Byron’s jersey again.”

Jets 21, Bills 17: Chad “Water Pistol” Pennington vs. whoever the fuck plays QB for the Bills now? Sign me up (for euthanasia!)

Titans 3, Dolphins 14: Not much to say about this one except a personal guarantee: anyone who watches it and cheers more than once has probably nailed his cousin at some point.

Redskins 10, Texans 7: I could buy an extra hot dog the next time I go to the RCA Dome and it would undoubtedly have more impact on the NFL than this game.

Ravens 14, Browns 3: Sometimes I think it would be really funny if the giant cat from that movie “Evil Cat” came by and used Browns Stadium as a litter box. It would sure make Cleveland smell better!

Giants 21, Seahawks 24: I’m gonna change my last name to “Manning” and forget to wash my face for a few days. See you guys in the ‘08 draft!

Eagles 29, 49ers 3: Shit talk aside the Eagles are looking really goddamn strong this year. I really hope Alex Smith takes a swing at McNabb and gets his fist caught in between his front teeth.

Rams 24, Cardinals 26: This game should prove a great opportunity to flip your TV to the church channel and beat the hell out of it with a hammer.

Falcons 30, Saints 14: I told you Michael Vick might learn to throw a football this year!

Evan "Pantsfish" Wade once had a Chinese roommate who said his last name would be pronounced "Wah-du" in China. Email him if you want.