At a Glance: This game, made by the great side scroller manufacturer Konami, allows you to take the place of the simple-living Cajun Bayou Billy who is an obvious rip-off of Mirimax’s Crocodile Dundee. But who can blame Konami? After the tremendously successful string of films starring the insanely popular action and comedy star Paul Hogan, it was the obvious step to take. Mmmmm, Paul Hogan. What a big, strong brute man. Can anyone blame Konami? I know I sure can’t. Maybe Paul Hogan can. 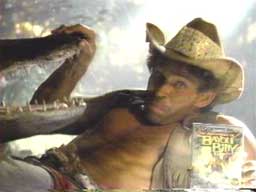 The TV ads for Bayou Billy gave me great hope as a child because I assumed he was about to be eaten and killed.

Game Plot: Before you start actually “playing” the game, the voice of God speaks and lets the game player know they are playing a game starring Bayou Billy. The story explains that Bayou Billy’s girlfriend Annabelle has been kidnapped by some shady-looking evil mastermind who I am assuming is the governor of Louisiana. The governor says he will take Annabelle to his house, of which the location he does not disclose but somehow Bayou Billy innately knows. Billy’s task is to get to the governor’s house, but he (the governor, not Bayou Billy) has placed some “obstacles” for Billy to overcome before making it to the capitol.

The game starts off this title: "Use Game Controller on This Level," and there is a picture of the Nintendo controller. Thank God for the cunning skill of the people working at the offices of Konami; I don’t know what I would do without them. I would've probably tried to use my jar of wooden nickels to play.

After the lifesaving message, you find yourself deep in the swamps of the south. As you proceed, you notice the following notice floating above your head: “Bullets = 00,” and it never ever changes. The geniuses at Konami have done it again! Instead of going through all the trouble of saying right off the bat, "you have no gun," the game programmers decided to taunt you with the thought that there maybe is a gun in the game and maybe you haven’t gotten to the part in the game where there is a gun and maybe some bullets along with it. But no, instead they decided to let you know to use the game controller to control the game. After I got over my initial anger about the things I just listed, I calmed down, pulled the controller out of the hole in the wall, and began to really play the game.

I immediately noticed that Bayou Billy is the most difficult game in the history of the planet. Each enemy has about the same amount of health as your character starts with. That’s just not right, there has to be some sort of a handicap; couldn’t the henchmen employed by the evil governor of Louisiana at least be retarded or have no arms or something of that sort? Next, Bayou Billy is in fact not the muscle-ripped hunk of mass the game made him out to be. Billy is a six-foot three inched 85 pound chemotherapy patient who could be beaten in an arm wrestling match by a one pound weight. Bayou Billy is the most un-strong person on the face of the planet. When Billy punches an evil henchman, the henchman simply flashes white and red to signal that Billy’s punch did not hurt. At least that's what I’m assuming that’s it means. Also, even when Billy picks up a weapon and hits someone over the head with it, the henchman is not phased one bit and flashes red and white to signal that the blow over the head by Bayou Billy tickles, I think. And so it is for those reasons that Bayou Billy is an impossible game and I could not get past the first level. I could not even get the first boss. If there was one.

"This entire game" being one of them.

Weapons: The game does in fact have a number of weapons, the first of which being Bayou Billy’s glass-fist which shatters whenever it comes in contact with a bad guy’s jaw. The second weapon is the broken ankle of Bayou Billy, whereupon a lightning kick is thrown at one of Bayou Billy’s enemies. Billy then slows down his kick so when contact is made it doesn’t hurt his ankle in the least. As a result, Billy’s enemies are not hurt either. Maybe their feelings are hurt, but besides potential emotional damage there is not much else of a result.

The next weapons are only attainable after beating them out of an evil henchman. If Billy punches someone soft enough, which happens almost every time, the enemy will laugh so hard a weapon will fly out of the enemy's pants and become available to Billy. The first of these weapons is a stick. Billy hits people with it. This is exciting stuff.

The next weapon is a knife. After beating the knife out of an enemy, Billy can pick it up and throw it at someone else, nothing like any other game like Final Fight or every single side scroller ever made in the history of the planet has done.

The last item I picked up which had come out of the pants of an enemy was a turkey. Hey, who doesn’t carry a 12-lb cooked turkey with them when going on an exciting trip to beat to death an 85-lb chemotherapy patient? Nobody that I know of, at least.

Most green jeeps can reach 180 mph on dirt roads.

Enemies: This game did have a variety of enemies and not just the same man in different colored skintight spandex. Some of the enemies included:

Number of Levels: Alas, I was not able to get past the first level, so I don’t know.

Number of Bosses: Once again, I have no idea.

Defining Moment: There were two defining moments for me. The first was when I discovered how to make Bayou Billy jump. It is so logical I don’t know why I didn’t think of it before. To jump, you just press the punch and the kick buttons together. Billy not only jumps when you do this, he executes a flying jump kick. It is so true to real life.

Oh yeah, it was pretty defining when I was able to make Billy beat a turkey out of an alligator too.