Treasures That Shouldn't Be Featured In Uncharted 4

Uncharted 3 is just weeks away, which means that work has probably already begun on Uncharted 4. While the series has always been about so much more, a remarkably valuable artifact or location has been at the center of each installment.

I'd like to suggest that the Naughty Dog team avoids the following treasures for their next game, as I really enjoy Uncharted and would hate to see it get even more stupid than the monster people and terrible final boss fights that have taken big smelly dumps on the first two games. 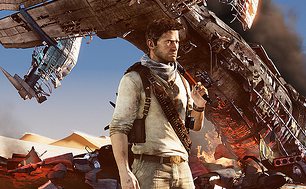 Literally the fortune from City Slickers II: The Legend Of Curly's Gold. In the most cinematic video game to date, Drake must sneak his way through every scene from the film, avoiding detection by Billy Crystal, Jack Palance, the guy from Home Alone, and Jon Lovitz.

All combat will be replaced with intense horse riding, conversations about baseball and marriage, and campfire bean jokes.

The greatest mystery of all time is also the most mundane. Where did my sock go?

As Drake scours his apartment for the missing garment, he uncovers layer upon layer of conspiracy. Somehow he encounters numerous guards, finds himself double-crossed by friends, faces mystical powers, and even solves elaborate puzzles crated more than a thousand years ago - all without leaving his home.

Pretty simple premise: Drake finds a map leading to a vast treasure atop a very high structure. There are no bad guys, no traps, just a vast fortune.

The catch? There are no working stairs. Instead, Drake and Sully must work their way up one level at a time, giving each other boosts, kicking down ladders, and activating devices for over six hours while cracking wise with one another.

Nuclear Dawn
A multiplayer FPS/RTS hybrid which works better than it should, by which I mean "at all". 7/10

Rage
A fantastic shooter with terrific gunplay, unparalleled enemy reactions, and a bunch of extra diversions - not a ripoff of Fallout or Borderlands or whatever game some dipshit reviewer might have invoked because it had apocalypses and cars. 8/10

Batman: Arkham City
Something about this project always concerned me (whether it was the fast turnaround time, increased scope, or super high expectations set by the amazing Arkham Asylum), but this is pretty much the badass follow-up that you were hoping for. 9/10

Ace Combat: Assault Horizon
Something about the continued existence of console jet fighter games with awkward storylines is super weird, and this certainly carries the torch. 4/10

NBA 2K12
There is more entertainment to be found in the My Player mode than in Ron Artest's entire offseason. 9/10

Forza Motorsport 4
A brilliant game in concept, and in practice it has absolutely no reason to exist since you can still play Forza 3. 6/10

Dead Rising 2: Off The Record
See above review, but replace "no reason to exist" with one reason: chubby Frank West in daisy dukes. 7/10

The Cursed Crusade
This can't be anything other than a secret Obsidian project designed to make Dungeon Siege III look way more competent and fun. 2/10