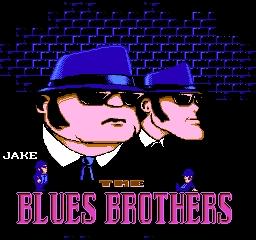 At a Glance: What do you get when you take all of the most frustrating jumping puzzles from the Metroid series, remove all the weapons, atmosphere, and fun, and turn it into a licensed game based on the movie The Blues Brothers? Why, Blues Brothers the game of course! I was hoping it would be a firearm instead because shooting myself in the scrotum would have been a lot more fun than playing this pile of shit.

When you sit down and decide to write a RomPit review you are under the impression that it’s going to be a quick article that’ll take an hour or two to write and then you’ll be done with it and the world will love you and you’ll get laid and win a million dollars and receive the presidential medal of honor. Folks, I am here to say that is far from the truth. There is a reason the RomPit is not a weekly, monthly, or even bi-monthly feature. Writing a review of a crappy Nintendo game developed over two decades ago is mind numbingly excruciating.

If you ever get the bright idea to submit content to this web site in the hopes of getting a regular spot, DO NOT WRITE ROMPIT REVIEWS! I’ve seen families torn over it. I’ve seen marriages destroyed. I’ve seen whole countries decimated. RomPit reviews may seem like fun and games but those who write them lay their lives on the line. The RomPit reviewers of the past had great families, good jobs, and a wonderful future. All that changed the day they emailed Lowtax their first review. They fell in with the RomPit crowd and when they realized how far the pit descended into the depths of human depravity, they were in too deep to escape. They were consumed by the horrifying atrocities of interactive entertainment, and soon I will as well. Don’t cry for me, friends. I am already dead inside.

Game Plot: Licensed games have always been a stain on the video game landscape for as long as the medium has existed. The concept is simple, if people love the movie, they’ll love the game right? The problem is that the tender loving care that was put into the movie is almost never injected into the game. The Blues Brothers is another example of the “movie license games suck ass” rule and probably the worst movie to game translations in video game history, if not the worst game ever.

At least you can rape sharks in this game. It’s got that much going for it.

If you haven’t figured it out yet, and I wouldn’t be surprised if most of you hadn’t, The Blues Brothers is based on the movie of the same name. You can choose to play as Jake or Elwood but there are no differences between the two characters such as Jake being faster than Elwood, or Elwood being able to jump farther than Jake. Such a design element would have pushed the release date back another six months and put the game over budget. The game pits you against 5 of the most frustratingly difficult levels I have ever seen in a platformer. It’s like the goal of the design team wasn’t to make a fun and challenging adventure for people to enjoy, but to test the limits of how much the average player would put up with before they pull all their pubic hairs out in a fit of rage.

If I could ask the monsters who developed this game one question and one question only, I would ask them, WHY THE FUCK IS THIS A PLATFORMER?! The Blues Brothers was overflowing with fantastic chases and off the wall action. It would have been so easy to make a car chase game where you run from the police and Nazis in a police cruiser. Imagine Hitler and Joseph Goebbels chasing after the Blues Brothers in one of those motorcycles with the bucket seat attached to the side. And at the end of the level the Blues Brothers drive off a ramp to clear a lake and the Nazis take the same jump and crash into the water. A dyslexic autistic A.D.D. suffering child could have figured out that this is the best way to make a Blues Brothers video game. Hell, Derek Smart could have designed a more playable Blues Brothers game than these Titus fucks.

Share the Blues Brothers experience with a friend! If you want your friend to shove a controller up your ass that is!

There is also a pointless two player mode. It’s kind of like Sonic the Hedgehog 2 in which the camera stays on Jake and the person playing as Elwood has to stay in the frame or just be left behind. The difference is that Elwood doesn’t have two tails and won’t fly back onto the screen. I loved using Tails to get a few extra hits on bosses because he was basically invulnerable. Tails may be a stupid effeminate sidekick fox but you could always count on him to sacrifice himself for the team and come flying on back.

Enemies: First things first, where the hell are the Nazis? Fuck Nintendo and their “clean” games. One thing I regret about the Nintendo era is that none of the games released on the system had over the top violence or Nazis. Every game should have Nazis. Imagine how great games like Excitebike, Super Mario Bros., and Duck Hunt would have been if the Nazi party had some sort of supporting role. Unfortunately, not even Nazis could save this stinker.

There are enemies in the game but I fail to see the point. Why bother putting enemies in the game when the biggest enemy is the slippery controls? The Blues Brothers team did manage to put together some sprites that slightly resemble what they are supposed to look like such as security guards that shoot fish-shaped bullets, extremely large flying birds that shit eggs on you, and a shark that looks like a rip off of that shark from the comic Sherman’s Lagoon.

These enemies must be magic because they sure do disappear a lot. You know that flickering slowdown effect that occurs in a lot of Nintendo games when there are too many sprites on the screen? Well, the Titus team has managed to implement a revolutionary feature into The Blues Brothers, making the screen slow down and flicker when there is only one sprite on the screen! It’s called the “Make It Fucking Impossible To Do Anything In This Game” engine. As if the controls were not bad enough, the slowdown and flicker make it almost impossible. 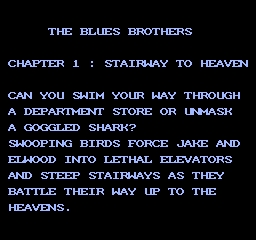 Get the music reference? Stairway to Heaven? Get it?!?!

Weapons: The first odd thing that struck me about this game is that there are absolutely no weapons to pick up or use. If I were in a mall with floating green spiky orbs I would find something, anything, to defend myself with. I would grab a stick, a trashcan, a small child, anything to fend off the hordes of stupid enemies that were drawn shortly after the sprite artist learned how to use MSPaint. I can’t remember if they had weapons in the movie but I am sure as fuck that Jake and Elwood weren’t no pussy pacifists either.

Levels: I had hoped that as soon as I pressed start at the main menu the game would cut to the Game Over screen but unfortunately Titus found a few free minutes in their busy schedule of dressing up in soiled panties and fondling each other’s genitals to slam together 5 very short levels.

The first level is called Stairway to Heaven. The level is aptly named because by the time you are done with this game you’ll probably be dead and in the process of being judged by St. Peter at the gates of Heaven. Hint: most of you will be sent to Hell. Each level is preceded by an absurd description. Check out the description for the second level.

Launching into a giant deep freeze, the Blues Brothers forge ahead, despite continuous bombardments of eggs. You will be the victim of mad hounds and ferocious frozen peas determined to package you in at the warehouse.

The first level begins in a mall with platforms that must have been paved with cooking spray. There are some exciting gaps between these platforms that you’ll have to jump over. You’ll usually fail to clear any of these gaps and have to run through half the level again. The only thing I hate more than jumping puzzles are games that force you to run through half the fucking level over again when you miss a jump. You talk about violent games making kids want to kill people. These platformers make kids even more insane than Grand Theft Auto ever could. If a kid killed his parents and he was playing The Blues Brothers that day, I would sue Titus.

Some of these platforms are made even more impossible because of the underwater controls. Obviously when your character is in the water in any platformer the controls become less responsive and more “floaty”. In Blues Brothers, the regular controls feel like you are in outer space in the first place, so you can imagine what controlling your character underwater must be like. This is the great game design Titus is known and respected for in the video game industry. Shigeru Miyamoto, you could learn a thing or two from these guys.

There are other levels in the game but good luck getting to them. The first level is so monumentally hard that you’ll probably murder your wife and children, or anime wall scrolls for the rest of you, shortly after the game begins.

Bosses: There are no bosses in this game so I guess I don’t have to write anything in this section.