Wally Bear and the No! Gang 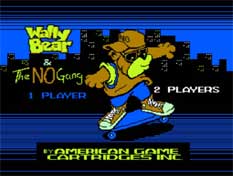 At a Glance: As the title screen vomits itself onto your monitor, a bold introduction is made to American Video Entertainment's (AVE) all-around all star of a mascot: a hip-hopping bipedal bear complete with cool-guy sunglasses, sideways hat sporting the word 'NO!', and a sharp-shooting mouth armed with skateboarding lingo and anti-substance abuse propaganda. AVE's game, taken from American Game Cartridges Inc. (AGCI) after they went bankrupt, tasks itself with the mission of making the general gaming audience aware of the dangers of drugs and alcohol - and in all fairness it's a noble and just task. Wally's adventure takes him through various cityscapes in efforts to educate and save his friends, various members of the NO! gang, from the dangers of peer pressure and debauchery. But while the game may be padded with a soft aura of good intentions, this 8-bit horror of entertainment's message fails to articulate anything other than saying, "NO!" to things and the only way the game's message could frighten me more would be if the entire NO! gang turned vegan and tattooed X's on the backs of their hands. Corny theme aside, the game comes with the normal fixings including: dull gameplay, monotonous audio, and curiously eerie, brain thrashing graphics that simulate me with a strange sexual arousal towards fetishes that I never knew or wish I had. 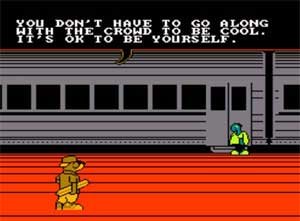 Easy for you to say Wally. You're trendier than not capitalizing the letter 'T' in 'truth'.

Game Plot: The game starts off headed down the path of success and great adventure as Wally finds himself on a glorious quest to find his friends and party! However all of the road signs pointing to 'fun' and 'not sucking' are covered with the blood from my self inflicted wounds as it's learned that the party is being thrown by Wally's own uncle Grizzly and the invitation list consist of only the NO! gang. Insane degrees of 'cool', 'attitude', and 'coolitude' may not run through my veins like they supposedly do for Wally, but I would figure that the idea of a party thrown by your uncle should cause your coolitude-flooded blood to clot causing massive pain and amazing explosions. You're sent off to party by your parents (yes, your parents) with stern directions to 'get there before dark' and to 'say no! stay smart! don't start!', welcomed warnings from two very noticeably pant-less and busty bosomed bears crouching in a furniture-less house painfully plastered with strawberry and tomato wallpaper guaranteed to make venom bleed out of your eyes, morph into small demonic parasites, burrow back into your eyes feeding off the images of strawberries and tomatoes, and pollute your brain with their acidic excrement.

Weapons: Wally's parents don't just send their kid down gentle suburban streets full of stick-ball, stick-hockey, and sticks to engage in hardcore, non-alcoholic partying at his uncle's cabin, they send him directly into hostile, opposing gang territory where thievery, drug use, and child abduction through the lures of precious candy run rampant. And other than Wally's repetitious inclinations to say 'no' and his jazzy attitude towards 'partying hard', Wally must rely only on his skateboard, ollieing over obstacles to reach powerups.

There are only two powerups Wally is able to land his clean, drug-free hands on however; the first being a skateboard which grants him increased speed and an extra hit. The other powerup grants you a nearly essential range attack allowing you to equipping what can only be presumed to be a Frisbee but could just as easily be a pie, one that boasts a safe and sane scruple filling, or a gay looking hat. You can also collect a teddy bear in, and only in, Level 6 netting you a whopping 500 points; and while the points aren't redeemable for prizes or the such, they look fantastic at the top of your screen.

Number of Levels: Seven; the streets outside Wally's house, the train station, the darker tinted streets in close proximity to Wally's house, the subway, some city, and three additional levels that I didn't reach but can most likely be seen behind the curtain in the next truth commercial. Background, like the music, is bland and unimaginative as only an occasional fence, fire hydrant, or yellow sign with 'no' on it makes an effort to pivot the repetition factor from 'incredibly' to 'incredibly stupid'. Also, the subway is literally the exact same level as the train station and is slandered with ghostly advertisements for the AGCI games Shockwave and Crossbow, which was never even released. 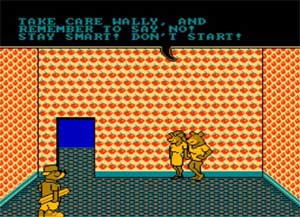 If only I didn't start this game...

Enemies: Vapid levels are filled with equally vapid enemies featuring the normal variety of animals game developers find themselves compelled to use. You first encounter dogs, and even though they randomly walk, stop, and occasionally think about jumping somewhere on or off the screen, the good people at AGCI/AVE turned the dogs into instructional devices as they look both ways before possibly thinking about perhaps blindly wandering into or away from your plausible direction. Birds and increasingly darker tinted birds also pose a threat as they randomly swoop in and away from Wally, only bested by Wally's divine ability to let all bird-like danger pass directly through him by ducking.

The rival gang leader Ricky Rat, too occupied with lobbing drug bombs, dropping chaos, and stealing radios from poodles, also hired some henchmen but their drunken intoxication makes them quite inept at aiming and being effective. Rats throw bombs and some sort of crumpled up paper mache ball or possibly magical space rock at you and lizards under the savage influence of alcohol spew both globs of green toxic at you and in later levels coconuts, the two main ingredients for catastrophe.

Bosses: The only boss in the game is Ricky Rat who you basically encounter during various stages and throughout the final level. In between each drug busting stage is a couple second dialog between Wally and a NO! gang member offering golden knowledge to the player which can all be flatly paraphrased into: "If you had to figure this out from a cartoon mascot, you suck as much as this game". Here is a sample dialog between Wally and NO! gang member Tattle Tiger who takes a fancy to both tattling and being a tiger:

Tattle Tiger: "I just saw Larry Lizard going into this garage."
Tattle Tiger: "He was drinking out of a strange looking bottle and acting really strange."
Wally Bear: "It sounds like Larry's been drinking."

Defining Moment: Seeing the rats mature from lobbing white balls of mystery to hurling up to four bombs at Wally. Despite being desperately aimed at a younger audience, Wally Bear and the NO! Gang got too difficult for me near the end. While in a few stages you can hold forward and just jump over the rats and their moon orbs, other stages practically require power-ups as the screen flood with disaster.

Frankly Wally's anti-substance abuse escapades are as uninteresting as they are uninformative, I got more anti-drug propaganda trampled into me from those brief, white background messages while playing Street Fighter 2 Turbo at the arcade than from this mascot shit parade. And though I didn't make it to the last cutscene due to the difficulty and the fact that my vision was masked with blood from my recent brain explosion, I think I can safely guess that after wooing Prissy Poodle by retrieving her stolen radio, Wally whips it out for Prissy at the party and demonstrates proper condom usage and safe-sex to the kids.

– Andy "I Have No Nickname" Nishida