It's hard work being the office prankster. Every day there is enormous pressure to come up with a different object to urinate upon. That's why I was delighted to see the Forum Goons share more stories of hilarious pranks at work. Now I have a whole new world of inspiration to work with, and I can retain my place in the office as the witty clown prince who everyone loves. Perhaps you can also use some of the ideas in this article to inspire you to piss all over objects in your workplace too. 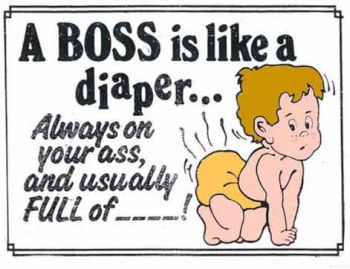 I worked at a downtown drug store for a couple years in highschool. At nights it was usually just me alone at the front till and the pharmacist in the back of the store. We were extremely slow in winter, so I kept telling her I was going to prank her one of these nights to break the boredom.

One night I called the back using an outside line and pretended to be a customer. Crying, I told her that I thought I'd lost my glass eye in the store and had anyone found it? With a bit of concerned panic in her voice, she told me to hold on while she went to ask the cashier (me).

So I set the phone down and fished a big white marble out of my pocket. (looking back on this it was actually pretty cruel). As the pharmacist came down the aisle to ask me if I'd found a glass eye, I said "Hey look what I found behind the counter!" and as I went to show it to her, let it fall from my hand. "Oops!"

As it rolled towards her on the floor, she struck the pose of someone who had seen a mouse and screamed.

It took several minutes of explanation to convince her that it was just a marble and that I'd been the one on the phone.

Hey, I warned her.

When I used to work at Best Buy I confronted a young, 16 year old seasonal employee embarking on his first day at a real job. He, seeing me as his senior, obeyed everything that I said. While I never took advantage of this and let him do whatever he pleased, when I caught him talking on the phone halfway across the store for an entire hour (laughing and yelling to his buddy, mind you) I promptly approached him and told him his mother was on the store's phone line and to dial extension 40 to answer her. What I didn't tell him was that extension was the PA system that would announce to the entire store, customers, employees, everyone.

He picks up the phone, dials in, and I run back to my section and hide.

The usual hustle and bustle of the department store was suddenly answered with a loud "Hello? Hello? Is anyone there? Can you hear me, mom?" It was after "Can you hear me, mom" that he realized what he had done because his voice was delayed around 5 seconds and his message was finally playing through every speaker in the store.

I had a pack of Trident chewing gum, and had taken the individually-wrapped pieces of gum out of the wrappers. I cut out strips of non-toxic adhesive putty, which had the same colour and texture as the gum, and wrapped them in the little paper wrappers and placed them back into the package. I'd leave it on the counter and watch the reactions of the staff as they'd take a piece and start chewing.

When I worked at a restaurant as the shift manager I would always assign the duties for people to do before they left for the night. All my new employees would take out trash, restock stuff, and empty the water out of the coffee pot. I would tell them to get a big pitcher because the coffee pot (huge urns of coffee) held a lot of water. It never got old watching people empty the damn thing for 20 or so minutes, as everyone else casually watched knowing that the coffee machine is hooked up to a water line and never empties. I had one girl actually fill up a keg tub full of hot water trying to empty it. I miss that job so much.

I used a sharpie marker to colour in the earpiece of a co-workers phone in while he was gone from his desk for a moment. I then called him from my office phone and talked to him for about 20 minutes. This was enough time for the ink to transfer a lovely black circle on his ear and head which he cannot see or feel. The whole day was amazing watching him with customers.

Get a bag of 2-Bite brownies and roll 4-6 of them in your hands like playdoh. It will become a gooey log that looks remarkably like poop, especially if you add a touch of water to the top when it is done. Place on the bathroom floor away from toilet and wait for co-workers to find it. When they do and raise the alarm for people to come look, reach down and touch it with your finger and lick said finger while commenting "Yep, that is poop alright."

I have never seen better reactions than from that one.

I work for a smaller web-based company (about 5 of us in the office total). We use every opportunity that we can to play with my boss' office when he leaves on vacation or flies off somewhere.

Mainly this consists of shrink-wrapping his office, or suspending a mannequin from his ceiling. I think he went somewhere for Christmas and we had everyone, including the temps we hired to help with holiday shipping, in his office building a huge castle-like fortress out of every product that we sell. He came back with one of the sales reps from a company that we deal with. She was amused. He said that he didn't know if he wanted to laugh or yell.

The more common one is the use of army men. We have completely covered his office in these guys before, but I can only find the picture of his bathroom: 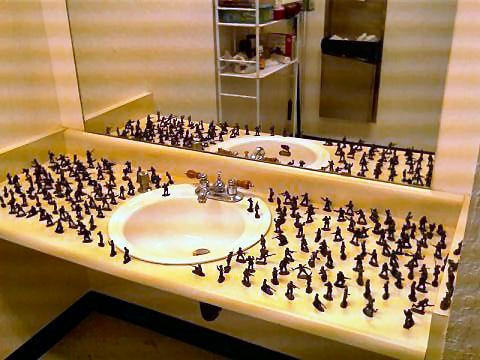