The War At Home

Which--if any--of these terrible tales are true? Perhaps no one can say for sure. They are myths, relegated, like free lunches and states rights, to a foggy and distant past. Nor is it entirely clear how a mere mallard might assume such unprecedented physical proportions.

However, it is clear that Plastic Duck--or, as he is now referred to by the lucky few to escape his ravenous maw, "Griefzilla"--is out for blood. Already, at least six hundred residents have perished, including longtime Duck critic Prokofy Neva, whose final entry in her infamous blog will surely echo through the ages.

I told them. I told them all that the tekki-wiki me-tooism and Eddie Haskel routine was just a front. I told them that he was a substrate for terrorism. I told them that he was criminal, who would stop at nothing until he achieved total destruction. But the Fetid Inner Core just ignored me, as monolithic as the Kremlin. But at last, as the city burns around me, I am vindicated. At last others will know Plastic Duck for who he really is, and what his kind are capable of.

I dream of a day when they may rise above the billows to drag down in their reeking talons the remnants of puny, war-exhausted mankind -- of a day when the land shall sink, and the dark ocean floor shall ascend amidst universal pandemonium.

The end is near. I hear a noise at the door, as of some immense slippery body lumbering against it. It shall not find me. God, that hand! The window! The window! 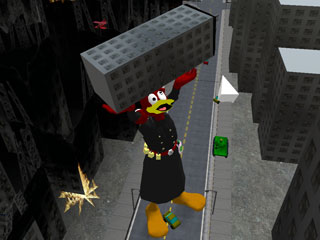 Such is the last testament of Prokofy Neva. One can almost hear her frenzied typing and mindless gurgling even now. She may be gone, but her ire will never be forgotten as long as Second Life exists.

Which, admittedly, may not be for much longer. Reports of gridcrashes have tripled in the last hour. Fighters have been scrambled, missiles deployed, and still Griefzilla plods on, monstrous and unimpeded. The sad truth is that, despite the great technological advances in recent Second Life history--the gyroscopic gridspanner, the voice font, the photosynthetic yiff--we may be the first generation to empirically examine its own eschatology: that is, to witness the end of this world.

And if that is the case, then may Philip have mercy on us all.

We now present the only available tape of Griefzilla. While it may be a terrifying sight, we urge you all to watch. If we are to survive, we must know our avian enemy.

This is Houston Nutt for the Metaverse Minutely, signing off.