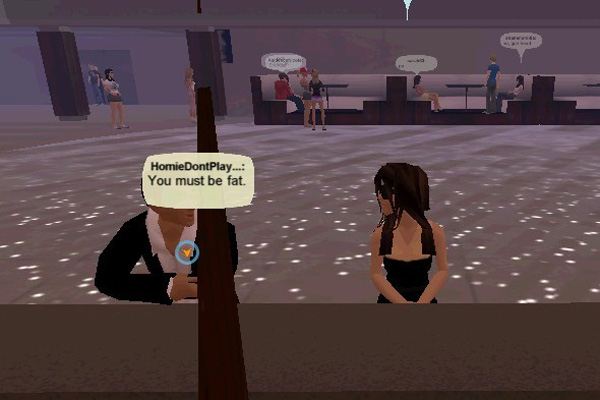 As champions of diversity and reason, we here at the Second Life Safari have always sought to expand our virtual horizons beyond the confines of a single game. Neither rain nor snow nor permaban will keep the griefer goons from making their rounds.

Luckily for us, there is no shortage of content, for there are more virtual world video games every day. Like moths not only drawn but also birthed and burned by the flame, an apparently endless horde of hirsute homebodies willingly waste their days away in pixellated purgatory. This is nothing new among the neckbeard set, but no one has ever seriously tried to recruit "regular" people into this. I think it had something to do with "real life", but I'm not sure, since I was too busy being deafened by Dragonforce to hear it.

But then the ever edgy MTV started up its avante-garde "Virtual Laguna Beach" project. Based on the There.com platform--a standard so shitty that it makes Second Life look ravishing by comparison--Virtual Laguna Beach was created for the sole purpose of virtually living the fabricated lifestyle of reality television, which is enough confluence of illusion to make Orwell mambo in his grave. Now, I spent most of my high school career furtively masturbating in the bathrooms, so I can't say for sure, but I seem to remember that the type of people who immersed themselves in MTV culture were less interested in video games and more concerned with hastening their descent into the local crack den.

But who am I to judge? My idle thoughts rarely settle on the subject of women, whose clothed company I find quite unfulfilling. Luckily, Web 2.0 superstar sashad123 uploaded an actual television commercial for Virtual Laguna Beach for our perusal.

Oh man, that's awesome! I want to chat with hot babes online! But alas, I lack the courage to converse with anyone whose breasts are larger than pudding cups, which rules out all the girls and half the guys on the Internet.

Thankfully, a few forum goons are braver than I, and managed to chat up not just any virtual vixen, but a Laguna Beach Lifeguard! Lifeguards are their moderators: the Maiar of their multiverse. They are hired to keep order in a PG-13 rated game, both in-world and on their forums.

One particular goon, operating with all the seductive suavity of an aging Jesuit, managed to curry the favor of one of these lustful lifeguards. This is his story.