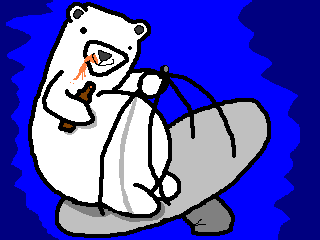 Don't _fcksavedurl=Returning readers will be happy to learn that the Swedish government still builds an embassy in Second Life, despite opposition from right thinking people and the odd marauder. Its propaganda arm, the Swedish Institute, seeks to "promote Sweden via public diplomacy using a wide variety of media." Having already cornered the market on interactive pornography, it appears our favorite statuesque Scandinavians really are serious about reaching out into new worlds.

"The majority of the embassy," the site says, "will be dedicated to revolving exhibits about Sweden." I'm not quite sure why you need a multimedia platform to educate people about binge drinking and polar bears. Maybe it's just me, but if my greatest cultural export was Yngwie Malmsteen I'd prefer to stay out of the social spotlight. Also, polar bears are conniving carousers, and will surely break into the booze, which bodes well for no one. The last time a bunch of bears got drunk and dizzy Andy Dick got syndicated and I'm not sure our country could survive such hardship again.

Nevertheless, you have to give the Swedish government props for trying to keep up with the times. It shows commendable, if misguided, devotion to our changing world. President Bush, by his own admission, doesn't even use email, but I suppose he doesn't need to: it's not like his voter base places particular priority on technological trends. My grandfather is a staunch Republican, and the only time I ever heard him discussing "hip technology" he was looking for a replacement.

By contrast, the Democratic candidates can hardly wait to set up shop in Second Life. John Edwards was recently joined by Hillary Clinton in the virtual world, where analysts expect her icy demeanor and unkempt nasal hair to make her a natural Gorean ally. 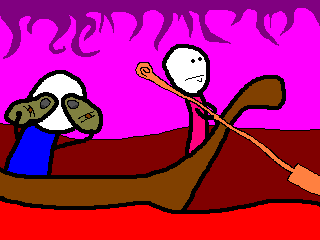 Now, I've met Hillary Clinton. As a child, I attended an archaeological dig presided over by her and Senator Patrick "Lungfucker" Leahy. Mr. Leahy arrived in a station wagon, wearing a cardigan, slacks, and penny loafers. Penny loafers are the preferred footwear of the aged because in the event of an untimely death one can bribe Charon with Keds. He exuded a grandfatherly aura, by which I mean he smelled like farts and newspaper. I had the pleasure of talking to him for awhile. I related my critically formed views on world issues as they appeared to adolescents; he talked about maple syrup and buffalo chips. I think he may have misheard me, possibly because his ears were still ringing from the Big Bang.

Mrs. Clinton arrived in a black bulletproof van, wearing a black bulletproof suit and surrounded by black bulletproof men. She scanned the crowd appraisingly, with the type of snarl one might expect to see grace the face of Hannibal Lector at a liposuction clinic. Her eyes briefly made contact with mine, and in her obsidian orbs I saw a desire to consume, to savage, to ravish over and over and over again until her subject was a soulless husk, incapable of thought or emotion, reduced to nothing but a tireless advocate of universal health care. My god--I have never been more aroused in all my life.

Always the astute politicker, Mrs. Clinton invested over $2000 in a base described by one reviewer as, "a mashup of a Puerto Vallarta foam party, an episode of 24, and a slumber party for middle-school girls...[with] a disco floor, a helicopter, a black speedboat, a hot air balloon, two animated dolphins, and a pony-sized iridescent unicorn." As such, she has the dancing-babyfur-member-of-the-military-industrial-complex vote locked up. It's nothing short of a devastating setback for John McCain, whose traveling musical troupe "Johnny and the Gookettes" was once the undisputed leader in political performance art. 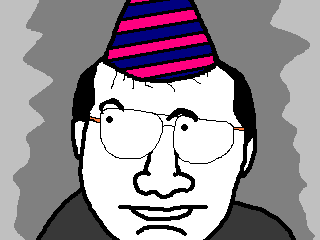 Finally, with a third place debut in the arms race of ultimate irrelevancy, we have the Second Life Bar Association. The autistic brainchild of attorney Benjamin Duranske, the SLBA aims to assure all of us with lingering doubts to the contrary that the legal profession has indeed descended into irredeemable frivolity. This hypothesis, of course, was first promulgated by pundits after Antonin Scalia smeared snot in lieu of a signature on a particularly vigorous dissent.

Mr. Duranske attempts to defend his organization by saying that in virtual worlds such as Second Life or World of Warcraft, legal questions "will inevitably arise, and virtual law will just as inevitably become part of the modern legal landscape." I hate to disappoint ivory tower academics and sexy night elfs alike, but I do not find his argument particularly convincing. Just because crabgrass inevitably grows out of your lawn does not mean it is a harbinger of good things to come, unless you were trying to grow a crabgrass garden in which case I suppose you're a more accomplished horticulturist than I originally estimated.

So which is it, Mr. Duranske? Are you a failed lawyer or terrific gardener? The choice is yours. When you have decided, you may inform me of your decision by wire, as I will not be at my computer. It is a Friday night, and time to dance the night away.