Og: It's What's for Dinner

Please report to the Little Saint Mary Missionary Chapel for your christening and weekly flogging via burly men at 12:30 this Tuesday. Failure to attend will deem you a heretic in the eyes of State Og, and you will be crucified. 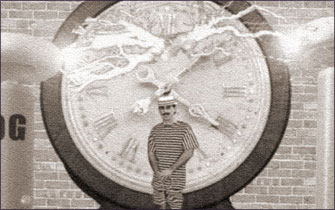 Intrepid Chrononaut Silas P. Hornfelkner III steps into the Tempochronometrograph. Next stop, wacky hijinks in King Arthur's court! (indecent exposure has been illegal a long time)The world was a bleak and colorless place in the closing years of the 19th century. The common man was smothered in a blanket of sickly peace and prosperity, unable to break the shackles of affluence that kept him from being the best he could be. Even the lowest of men lounged about on silk pillows, eating grapes from the cleavage of nubile serving girls, who ate their grapes from the loincloths of their serving boys, and so on and so on, all the way down to the lowest of the low, the boy who placed each grape in just the right place between the first serving girl's cleavage.

It was up to one man and one man alone to save humanity from a fate worse than, well, something. That man was humble Clerk Silas P. Hornfelkner III, who with sheer determination, grit and plans stolen from a neighboring inventor built the only working tempometrochronograph ever known to mankind. On the fateful morning of January 22, 1897, Silas stepped onto the platform of the tempograph... onto the platform of the machine and sent himself back in time to save humanity from it's disgusting attachment to easy living and universal tolerance, and to transform State Og from a small company of drunken halfwits into the world's largest megacorporation.

Although he was never able to return to the beautiful world he helped create, Silas recorded his amazing story on a series of clay tablets, which were discovered by archeologists excavating a Sumerian bordello in 1989. From Ancient Egypt to Medieval France to his grandmother's backyard on Bathin' Day, Silas was there to give events the little push they needed to get humanity back on the right track. So every time you step on a crack vial outside of your favorite peep show emporium on your way to rob a liquor store, thank your lucky stars and good old Silas for the beautiful world we're all proud to live in. There, but for the grace of Og, we all go.

Please report to the shark tank this Tuesday at 12:30 to clean their teeth. Failure to comply will result in your wife not loving you any longer.

We at State Og know how annoying it is to receive filthy mail; who wants to handle paper that's been who knows where? Why, the next piece of mail you receive could be covered with polio, unless our mass marketing department is behind schedule again, in which case it will be a few more days. The fact of the matter that is every time you touch a fresh piece of delivered mail you're opening yourself up to a world of exotic and quite possibly deadly cooties!

The new State Og Mail Purification System is now available to take all those worries away. This simple forty-pound device fits snugly into any standard mailbox and awaits the delivery of fresh, impure mail. When the mail is put into the box, the Mail Purification System emits a blast of our own cleaning agent, instantly destroying any dirt, grime, germs and souls in a four mile radius. This process is so efficient not even God will be able to get into your mailbox.

Please note that recent reports from our test market for Mail Purification Systems regarding horrible chemical burns to area mailmen are entirely fabricated, as no suit exists that can allow any living or dead thing into the region to verify this.

Please report to the Poison Clinic on Tuesday at 12:30 precisely. It seems as though we accidentally injected you with the Carrot Top virus instead of antibiotics after you were treated for being bitten by our prototype Black Widow Hamster last week. Be sure to stop by for the Carrot Top antidote at the exact time specified, or you will slowly devolve into a prop comic whose material consists solely of flirting with women that are "hilariously" not interested in him.

Sex In the Workplace, Sort Of

It has come to our attention that the shortage of paper clips in the Accounts Department office is due to an unidentified staff member pilfering them for his or her own sexual gratification. Highly offensive (and baffling) models have been found hidden in air vents and partially flushed down toilets around the office, detailing paper-clip men and women in various sexual positions. These models have been passed on to police who are investigating whether these are linked to the molestation of several office computer monitors displaying Clippit, the friendly Microsoft Word Help animation who so graciously points out your imbecility. Head Office would like to remind you that paper clips should not be used for erotic purposes and that staff should restrict their fetish to online websites and dimly-lit sections of adult video stores. During your lunch hour.

You will be needed at 12:30 sharp in the Accounts Department, at which time we are projected to have entirely run out of paper clips. Be sure to bring an entire sloppily packed crate of the needed office supplies, with amazingly sharp cornered boxes haphazardly stacked twenty feet high. Failure to deliver the supplies will result in your family's corpses being dug up and propped against the sign out front, where they will be our new company mascots. If they are not already dead and/or buried, we will save you the work and murder/bury them ourselves before digging them back up.

Say, are you into sky diving? Bungee jumping? Crocodile annoying? YOU PUSSY!

State Og is now offering a brand new extreme sport that's so extreme we had to kill our grandmothers to keep them from having fatal heart attacks when they heard about it! Only the EXTREME minds in State Og's Department of the EXTREME could come up with something this radical!

We've combined the thrill of sky diving, bungee jumping and crocodile annoying into one killer EXTREME sport: IN REVERSE! That's right, after a short training session and personal liability waiving you'll be tethered to the ground and fired thousands of miles into the air! Sounds pretty EXTREME as it is, right? If you think so we question your sexuality! Once you're up there it's your task to enter a plane or you'll be slammed back into the ground at terrifying speeds thanks to the bungee cord! And the best part? The door is guarded by an annoyed crocodile! The only way back into that bird is to calm the crocodile down, or it's SPLAT CITY, DUDE!