Remember last summer when the President of the United States and leader of the free world sat down for an interview with the notorious pony-fetish website reddit and attempted to win over the coveted "MRA PUA" demographic by regurgitating an internet meme or two? Well, the Republican National Congressional Committee took notice and now they're trying to out-meme the Democrats in a never-ending race to the bottom with the newly rebranded NRCC.org.

The latest member of the Shadow Conservative Internet, the new NRCC.org is a blatant BuzzFeed ripoff created in the apparent hope that a haphazard collection of slapped-together GIFs will make millenials suddenly think the GOP is WIN, like a half-assed Internet version of the Southern Strategy ("By 2014 you can't say 'traditional marriage' - that hurts you. Backfires. So you say stuff like narwhals, FAIL and all that stuff.") 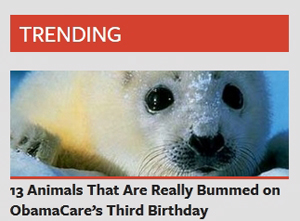 Why is famous Internet cat "Grumpy Cat" so grumpy? Because of ObamaCare! Here's Obama's budget described in a series of Epic Fail GIFs! Here are some charts that are animated for no apparent reason! And here Obama's all like [animated gif of a dog], but Republicans are all like the "This is Sparta" Guy!

It's almost exactly like BuzzFeed, except instead of having buttons at the bottom where you can vote an article "WIN," "OMG," or "FAIL", there are just solicitations for money or meaningless pledges to support Paul Ryan's latest sociopathic budget. COOL BEANS!

Here's some posts we're bound to see in the coming months: