State Og's offices are still in disarray after last week's mechanical bear attack, but agents Aaron "Elcybergoth" Young and Jason "Vengeance Otter" Johnson have pieced this update together from within the mechanical bowels of Shardik the Hungry.

At State Og all we want to do is provide valuable goods and services. Occasionally we might venture into world domination and complete oppression of the populace, but that's all in the interest of delivering valuable goods and services. So we're pleased to announce another good or service which will dominate your hearts and minds and bodies. What we did was combine the basic human need for artificially intelligent manservants with their other basic human need for thick animal fat-based sauce. Get ready for the latest thing we're making, Robots in Gravy!

Every meticulously designed robot is factory adjusted to have strength far greater than required for the menial tasks required of it, with a deeply rooted desire to simply belong. Then we slather them in the finest gravy our chefs can provide, assuring that these robots will never fail to be covered in gravy. Many models and types of gravy are available for the discerning consumer. We have MaidBots, ConstructionBots, and Beef Turkey and GravyBots, which make gravy to put on other robots.

What the hell is wrong with you, are you too good to pick up some Robots in Gravy RIGHT NOW?

When State Og Representative Dennis Farrell said he wanted me to infiltrate and find a way to stop the vast homeless-person conspiracy that plots against him, I knew that I’d struck gold. You see, being selected for high-profile projects like this (ie, Stalin-esque witch hunts against the latest subject of Farrell’s frequently changing paranoid delusions) for the boss means you’re on the fast track to high-level promotions at State Og.

Surely, I thought, I’ll be given access to the most advanced disguise technology State Og has to offer, so I can blend in with these people without homes, and without a doubt I’d be given access to the legendary Secret State Og Library where I’ll spend hours studying over ancient tomes of hobo lore and many scholarly analysis of their enchanting dialects. Dennis “Corin Tucker’s Stalker” Farrell told me he had an even better way for me to acquire the knowledge and skills need to fit in undetected among the homeless: he fired me and burned down my house.

Ever the optimist, I decided to embrace my new lifestyle. In fact I’m embracing it so much that I am reasonable certain that in the state of Texas I’m now technically molesting it. If only I were in Texas, however, I could have gotten a job and I’d have more to do than sit around figuratively hugging my low standard of living. Alas, I’m in the economically challenged state of Oregon where you stand a better chance of getting statutorily raped by the governor than getting a job.

Well, if I can’t get a job in this state, I’ll have to make my own or forever remain a bum. But what, I wondered? Just then the idea for the perfect job struck me: I’d become a bum! I’d become a bum, but not just any bum. I’ve decided to become the king of all bums throughout this great land.

While there have been a few attempts in the past by the homeless to unionize or form windshield washing guilds, no one has ever stepped forward to unite this country’s bum population and give them their own special government. Until now, that is. I am prepared to commit myself to leading the destitute into a new Age of Enlightenment. I mean that literally. Once my plan has reached fruition, I will govern the homeless in way fashioned after the monarchies of 18th century Europe. If you are an indigent, as I expect many of you using the Internet are, and willing to except me as your sovereign king, I will do my best to lead you to a new era of prosperity and you can take part in the following:

The Formation of a New Religion 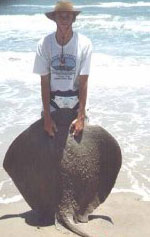 I'm not sure what this man is doing to this stingray, but I can be certain of one thing: whatever he's doing, it's one of the few jobs available in Oregon.

As mentioned earlier, I’ve decided to become a king, which is not something just anybody can do. I mean what kind of world would this be if any loser could, out of nowhere, just proclaim himself a king. In old Europe they a had a way of preventing that kind of crap. It was the Church, which legitimized the nobility with a sort of heavenly endorsement that their subjects saw as the authority needed to rule. The commoners within a serfdom knew the authority of the nobility had to be respected, because the Church said the nobles were who God wanted to be in charge. That way if a nobleman happened to rape a peasant's wife on the couple's wedding day while simultaneously ordering said peasant to go chop down more timber so the town hall could be upgraded to a keep, the poor serf could take comfort in the fact that he wasn't being abused and exploited by a cruelly wicked bastard, but was simply playing his vital role in God's beautiful unfolding plan for the universe. But I digress. What I'm getting at is that my monarchy needs religious backing.

After running around last week to every church near where I live, I couldn’t find one single priest, or even a church janitor, willing to grant me the “Divine right to rule the homeless” that I so richly deserve. I was forced to find a creative way of looking at this whole monarchy being backed up by religious institutions thing. After thinking about it I realized the solution was very easy. I simply started my own religion, then the very next second I coronated myself king in a ceremony that was celebrated with a great deal of pomp, splendor, and consumption of Nutter Butter cookies by me and the hooker in my room.

So far, one might say my religion is very much in fact in the infancy stage, and by that I mean I’m making it up as I go along. To be honest I haven’t put much thought into the new religion I’ve founded beyond using it as a cheap loophole to make myself a king. Hell, I don’t even have a name for my religion. If you become one of my followers and for some reason really feel the need for spiritual guidance you can worship the half empty box of orange Tic Tacs I’ve got in my pocket. I’m sure it will make a fine deity. I guess.

The Establishment of the Homeless Aristocracy 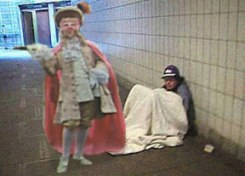 Here I can be seen on the left fully decked out in my resplendent finery. At my side is my vassal, Gary, Archduke of Portland. For some reason, I’ve always wanted to dress this way since I was twelve.

As I see it, there is no reason why the homeless can’t aspire to be ranked among the highest of society’s elite. Any homeless person willing to collect for me a reasonably small amount in taxes or to provide and maintain a contingent of men-at-arms will qualify to become a nobleman under my dominion. After that, your biggest problem will be escaping the paparazzi as they chase you down to snap photographs of you living your new glamorous lifestyle.

The only thing that still bugs me about my plan is that I’m not sure how to reconcile the fact that I’m trying to create a homeless aristocracy based on renaissance nobility who were all, quite frankly, landowners. Perhaps I should now set an example of piety for my subjects to follow by praying to the Tic Tac god in my pants for guidance. 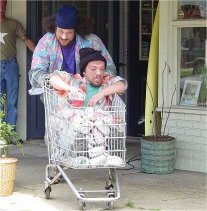 Maintaining a standing army will be vital to defense of my kingdom. Here you can see a crew from one of my armor divisions practicing maneuvers.

It is a sad and dangerous world that we live in today. However, with your help we can make the world even more sad and dangerous for our enemies. Who exactly are our enemies you ask? Are people with homes our enemy? No, the homed are not our enemy. Most of them are good but misguided people who -- kind of like how the typical person in the movie The Matrix is not prepared accept that they were living in a computer simulation of life -- are not ready yet to become homeless themselves. No, the real enemies are those who do not accept the Tic Tac god into their heart and follow his sacred teachings, whatever the hell those may be. But even more dangerous than the infidels are the bums who don't pledge an oath to join me. They are the scabs to my royal union and shall be dealt by being made into unwilling test subjects for my space program.

I have a vision of the future that includes putting bums in space, possibly with the use of some kind of spacecraft or a really big catapult. Regardless, building an efficient space program will be an important part of my destitute kingdom, so we can someday contact alien civilizations and form alliances with their bums. I bet we could learn a lot from the alien homeless and if not I bet we could probably eat them or steal their booze.

There you have it. If you are an unfortunate homeless person, by joining me your luck can take a turn for the better and you can become a fortunate homeless person before the day is through. All you have to do is accept me as your king, religious pontiff and possibly the beneficiary of several life insurance policies I might get for you. For your sworn allegiance, I will use my majestic authority to declare you of noble blood. And once you’ve got noble blood running through your veins, you won’t believe how easy it is to pick up the lady bums.