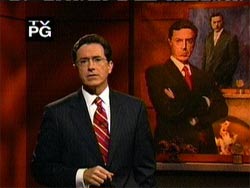 When Colbert is being serious, he's great. When he is just kidding around his show gets awkward.Steven Colbert is probably best known for being fired from the Daily Show where producers cited "creative differences." Colbert, a veteran reporter, has also appeared on shows ranging from the cautionary "Don't Talk to Strangers" to the "Harvey Birdman" children's cartoon. Each episode of "The Colbert Report" begins with a summary of the show's topics followed by an overbearing animated introduction that features Colbert waving a flag while an eagle swoops around screeching. It's a good patriotic intro to a show but it's a bit long and loud and frankly once is enough.

Colbert has obviously lifted much of his inspiration from personality-centered shows on other stations and feels a bit too derivative of the McLaughlin Report. The show's half-hour format leads to a barely adequate treatment of some of the more complex issues of the day. Kudos to Colbert for bringing in mostly liberals for the interview portions so that he can take them to task, but I wish he came to the interviews a bit more prepared. Although Colbert frequently attempts to "nail" his subjects during the course of an interview he usually resorts to irrelevant questions or sidetracks the interview with a bizarre stunt. In the show's first episode, for example, Colbert challenged TV anchor Stone Phillips to a debate on gravity but the interaction between the two quickly devolved into nonsense.

While Colbert's opinions are well-thought-out and finally give a voice to the mainstream sorely lacking from Comedy Central's programming he also tends to be a little bit egotistical. For example, at one point during the first week of the show Colbert read aloud from his novel "Alpha Squad 7: Lady Nocturne: A Tek Jansen Adventure." The novel did not seem particularly good and was completely inappropriate for a show that at least attempts to explain the news.

One of Colbert's most promising features - called "Know Your District" - is both ambitious and so far disappointing. Colbert has announced that he plans to travel to all 4,350 of America's Congressional districts to interview the representatives. While this seems like it could be a factual goldmine, Colbert seems to not want to take the representatives seriously. I get the fact that the show is supposed to work some jokes in once in a while, but I don't think Colbert should be dishonoring America's proud democratic tradition by making jokes. It would be okay if he only did this to the Democrats, but he also approaches the Republicans with a lack of seriousness that borders on treason.

What makes this all the more perplexing is that Colbert's excellent "W0RD" and "Threatdown" segments are both fascinating and enlightening. Colbert isn't afraid to alienate the leftwing media with his views and his mocking of the left's foibles has been absolutely hilarious. I would give the Colbert Report a real recommendation if it weren't so uneven and forced at times. I realize that Colbert had to make adjustments to his format to accommodate "comedy" in the show, but at times the show can really suffer for this reason. When "The Colbert Report" is taking itself seriously but not taking the opposition seriously it can be a great show, rivaled only by the sadly cancelled "Tough Crowd."

That said, Colbert as an anchor just plain works. His observations are spot-on and his opinions are inevitably well-spoken if not always completely original. Colbert could stand up there with the big names like O'Reilly (who he occasionally refers to fondly as Papa Bear) and it's only a matter of time before the halls of power reverberate with his voice. In time, if Colbert can learn to ask all "nail 'em" quality questions and take the traditions of government a bit more seriously, I think hecould become one of the most influential personalities on television. Look out John Stuart, Steven Colbert is back from your attempts to get rid of him and he's not going to parrot your liberal agenda crap anymore!