Conan Exiles Is My First Early Access Survival Game, and I'm the Best at These Things

I have no experience with early access survival games. No holding people at gunpoint, demanding they hand over a can of beans and their underwear. No rummaging through drawers in abandoned buildings for dinosaur eggs. No managing my body temperature by punching a tree until it bleeds enough sap for me to craft a spacesuit.

So when I received a press release about a new early access survival game set in the Conan universe, I decided to give the genre a shot.

It's not that I'm the biggest Conan fan in the world. Never read the books, barely remember the first movie. I did, however, enjoy Kurt Busiek's mid-2000s run in the Dark Horse comic book series. Here's everything I remember from those books: 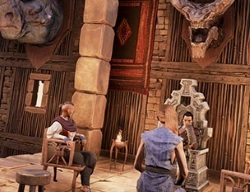 Are those essential concepts represented in Conan Exiles?

Maybe I'm getting ahead of myself. Why don't I describe my first few hours with the game, then transition to a clumsy conclusion?

A lot has been made of the character creation process in Conan Exiles, particularly the dong size slider. Everywhere you turn people are giggling about this game's microscopic peckers and humongous hogs. Well, true gamers and ethical journalists are above that sort of humor. So when I made my character, I simply accepted the penis that had been randomly generated, laughing heartily at my character's average-sized organ.

My journey began in a desert. I followed an ancient path of broken stone, my hand reaching straight out in whichever direction I was looking (even straight up) to grab rocks and sticks from the ground. Several minutes passed as I savored the simple pleasure of sticking that hand out and making vague grabby gestures like a baby. "I want that," I muttered petulantly, and things appeared in my inventory. The world was bending to my will. 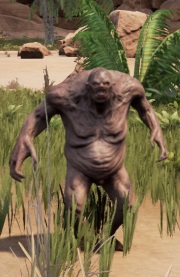 Having scrounged up some plant fiber, I covered my shameful body with a set of dingy clothes. Soon I came across an abandoned water skin with some mysterious crust on the lid and munched on some cat-sized grubs. With the basic necessities of life covered, I felt truly content.

At this point I was ambushed by what I can only describe as a teenage mutant ninja turtle with no shell and a sprawling cluster of face tumors. The next few moments were a confused blur of stumbling backwards, cursing to myself, swinging wildly, and wishing I had prepared. The developers say combat will be refined, but in my experience this is extremely realistic.

On the bank of a river I karate chopped large stones until I had enough small stones to build a hut. As the sun set upon this Hyborian oasis, I sat on my front porch and wistfully gazed upon the tiers upon tiers of objects in my crafting menu. In this quiet moment I contemplated the many possible futures stretching into infinite horizons of adventure and excitement. Then a crocodile ate me.

I've had the game for a few weeks and barely scratched the surface. As the plans for my empire continue to shift I spend most of my time getting eaten by crocodiles then crafting new burlap sack clothes. So what comes next?

I could build a settlement on the sheer walls of a cliff, pray to weird gods real hard until they show up and step on my enemies, and presumably make my way past the creeps and towers to destroy the ancient. Mind you, I haven't seen the endgame, but that's probably what it is.

For Honor
I'm willing to take an axe in my gut and get thrown off a parapet for honor, but I'm not willing to pay a single dollar for XP boosts or in-game steel. 7/10

Nioh
Don't think of this as Dark Souls with a different setting, but one of the better Ninja Gaiden games in an ill-fitting Dark Souls suit (also I never liked Ninja Gaiden). 6/10